“This action rightfully recognizes our veterans who triumphed against incredible odds." 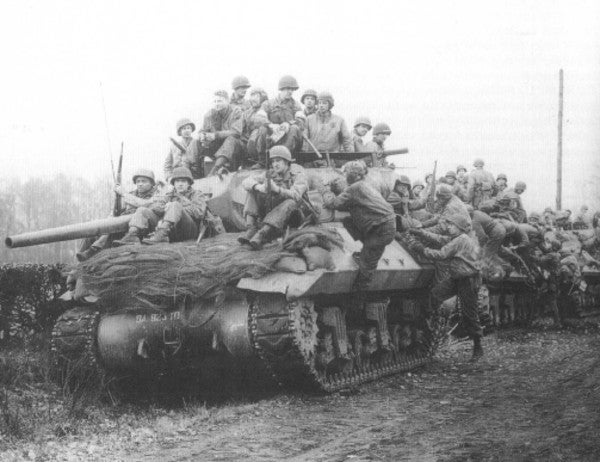 Seventy five years after their heroic stand in France, the remainder of the 30th Infantry Division is being recognized for their actions during World War II and receiving the Presidential Unit Citation.

The 30th ID — nicknamed the “Old Hickory Division” as the soldiers were from states associated with President Andrew Jackson — ”proved to be as tough as their unit’s namesake,” during a battle in 1944, President Donald Trump said in a statement released by the White House on Tuesday.

The citation was awarded to eight units within the Division after the war, Trump said, directing the Army “to honor the remainder of the Division and attached units” with the citation as well.

On August 6, 1944, the sleeping soldiers were hunkered down in foxholes around Mortain, France, when were woken by a German Panzer Corps; the Germans were planning to push towards Normandy to re-establish a defensive line, according to Blumenson.

“Into the path of this scheduled effort, and on the very day the attack was to start, came the 30th Infantry Division, commanded by Maj. Gen. L S Hobbs,” military historian Capt. Matin Blumenson wrote on the 30th ID's website.

American commanders “reacted with an offensive intention, rather than a defensive attitude,” per Blumenson, and everyone — including the division’s drivers, cooks, and clerks — was pushed into the fight, Trump’s statement said.

The soldiers continued to fight through daybreak, when American and British close air support arrived.

The battle raged on for another five days. As Blumeonson described: “the action was small-unit combat, fierce close-range fighting by splinter groups maneuvering to outflank, and in turn, being outflanked, a ‘see-sawing activity consisting of minor penetrations by both sides,’ characterized by ambush and surprise and fought on the level of the individual soldier.”

At the end of it all, more than 2,000 soldiers from the 30th ID had been killed or wounded.

Trump said on Tuesday that honoring the entire division with the citation “rightfully recognizes our veterans who triumphed against incredible odds, as well as those who died during a critical battle that helped ensure the Allied victory in Europe.”