"Jack Keane is a visionary, a brilliant strategist and an American hero," Trump said. 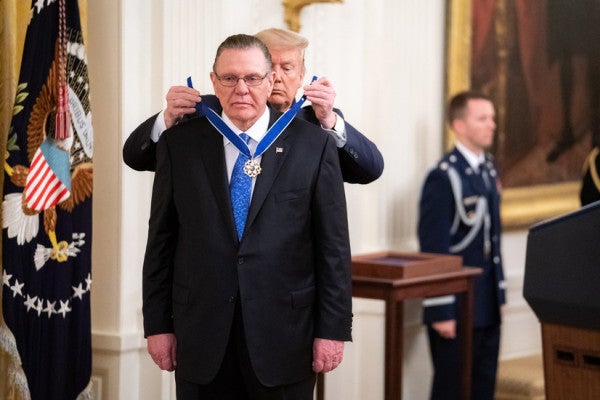 Retired U.S. Army Gen. Jack Keane was awarded the Presidential Medal of Freedom on Tuesday by President Donald Trump, who called him a “courageous warrior and a fearless patriot.”

“Jack Keane is a visionary, a brilliant strategist and an American hero,” Trump said of Keane, a previous contender for the job of secretary of defense.

Keane, a career infantry paratrooper, served in the Army from 1966 to 2003 — spending his last four years as Army vice chief of staff. Upon retiring, he “frequently traveled to Iraq and Afghanistan on behalf of defense officials,” according to a Pentagon press release.

He was described by Politico last year as a “shadow foreign policy adviser” to Trump who declined two separate offers to join the administration as defense secretary for personal reasons. The retired general, a contributor for Fox News, “has not hesitated to tell the president when he thinks he's wrong,” Politico reported.

Keane was also reportedly offered the job of Army Chief of Staff, per CNN, turning that down because his wife was suffering from Parkinson's disease. Trump called Keane's decision a “profound act of devotion.”

Keane lost dozens of Army colleagues when the Pentagon was hit on September 11, 2001, per the DoD release. He was later a “key architect of the Iraq surge,” Politico reports, advising President George W. Bush, Vice President Dick Cheney, and Gen. David Petraeus at the time.

“It was personal and I was angry and despite having left the Army, I never left the 9/11 wars and America's focus on radical Islam and what they did to us,” Keane said on Tuesday, according to CNN.

“General,” Trump said on Tuesday. “You will be remembered as one of the finest and most dedicated soldiers in a long and storied history of the United States military.”