No Americans were harmed by Iran’s missile attack, Trump says

Iran launched more than a dozen ballistic missiles at U.S. and coalition personnel stationed in Iraq on Tuesday night in retaliation for the U.S. killing of Iranian commander Maj. Gen. Qasem Soleimani. 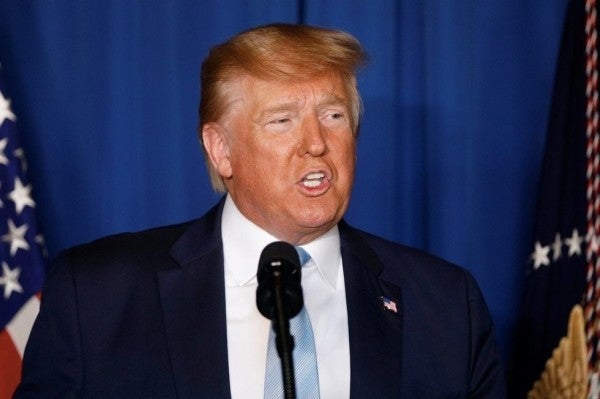 “The American people should be extremely and happy,” Trump stated in an address to the nation from the White House on Wednesday. “No Americans were harmed in last night's attack by the Iranian regime. We suffered no casualties. All of our soldiers are safe and only minimal damage was sustained at our military bases.”

The president credited the U.S. military's early warning system for helping to avoid both U.S. and Iraqi casualties.

Trump also said Iran appears to be “standing down” following the missile attacks.

Flanked by Defense Secretary Mark Esper, the Joint Chiefs of Staff, and Vice President Mike Pence, Trump did not indicate that the U.S. military would respond to the Iranian attacks. The president also reiterated that his administration will never allow Iran to acquire a nuclear weapon.

“As we continue to evaluate options in response to Iranian aggression, the United States will immediately impost additional punishing economic sanctions on the Iranian regime,” Trump said. “These powerful sanctions will remain until Iran changes its behavior.”

Iran launched more than a dozen ballistic missiles at U.S. and coalition personnel stationed in Iraq on Tuesday night in retaliation for the U.S. killing of Iranian commander Maj. Gen. Qasem Soleimani.

Soleimani, the head of the Iranian Revolution Guard Corps's elite Quds Force, was killed in an airstrike on Jan. 2 as he was leaving the Baghdad International Airport.

“The brave soldiers of IRGC's aerospace unit have launched a successful attack with tens of ballistic missiles on [Al Asad] military base in the name of martyr Gen. Qasem Soleimani,” the IRGC said in a statement.

The Iranian missiles “were launched from Iran and targeted at least two Iraqi military bases hosting U.S. military and coalition personnel at [Al Asad] and Irbil,” Jonathan Hoffman, the Pentagon's top spokesman, said in a statement on Tuesday.

Iran has a “substantial inventory” of short and medium-range ballistic missiles that can hit targets up to 125 miles away from its borders, according to the Defense Intelligence Agency.

“In recent days and in response to Iranian threats and actions, the Department of Defense has taken all appropriate measures to safeguard our personnel and partners,” Hoffman, the Pentagon spokesman, said on Tuesday.

Trump mentioned once again on Wednesday that the Defense Department's budget has increased during his tenure, which he considers one main accomplishments of his administration. However, he was quick to note that the investment in the military does not mean the United States is aching for a fight.

“The fact that we have this great military and equipment, however, does not mean we have to use it,” Trump said. “We do not want to use it. American strength, both military and economic, is the best deterrent.”