The Veterans of Foreign Wars has demanded an apology from President Trump over recent comments in which he downplayed the... 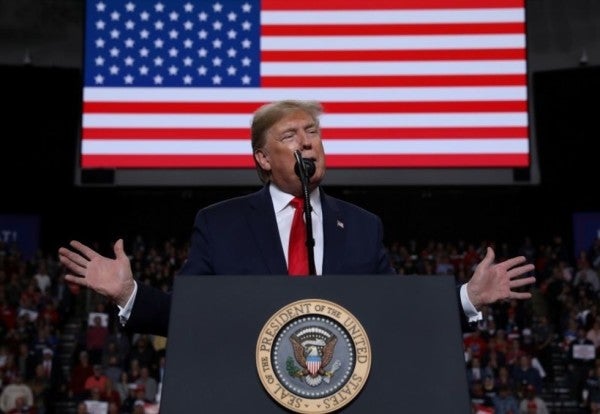 “The Veterans of Foreign Wars cannot stand idle on this matter,” William “Doc” Schmitz, VFW National Commander, said in a statement Friday, noting TBI is a serious injury known to cause depression, memory loss, severe headaches and other symptoms in the short and long-term.

“The VFW expects an apology from the president to our service men and women for his misguided remarks,” Schmitz added.

“And, we ask that he and the White House join with us in our efforts to educate Americans of the dangers TBI has on these heroes as they protect our great nation in these trying times. Our warriors require our full support more than ever in this challenging environment.”

The nation's oldest veterans organization, the VFW claims roughly 1.6 million members spread among more than 6,000 posts worldwide, according to a VFW fact sheet.

A VFW spokesman was not immediately available for further comment. The White House did not respond to a request for comment from Task & Purpose.

Iran launched ballistic missiles at bases housing American and Iraqi troops on Jan. 8 in retaliation for the killing of Maj. Gen. Qassem Soleimani, a senior Iranian military commander. Although most troops were hunkered down inside bunkers when missiles struck, some were hit by blast waves resulting in concussions or traumatic brain injury, Army Col. Myles Caggins, a U.S. military spokesman, told The New York Times.

The VFW statement came after the Pentagon's top spokesman told reporters on Friday morning that a total of 34 American troops had been treated for TBI following the attack. Eighteen troops were medically evacuated out of Iraq for treatment, while 16 were treated in Iraq and have since returned to duty.

The day after the Iranian missile attack, Trump reported in a White House address that “no Americans were harmed,” a claim that can be seen as reasonable at the time since TBI, concussions, and other non-obvious physical injuries can take some time to assess.

Still, the VFW and other critics have taken issue with what Trump said nearly two weeks later to reporters while attending the World Economic Forum in Davos, Switzerland.

Asked about the discrepancy between no casualties and the Pentagon reporting then that 11 service members had been taken in for medical treatment, Trump said he had heard initially that some troops “had headaches” before explaining that he didn't consider traumatic brain injuries as “very serious,” since they were not as bad as physical wounds from IED attacks.

This was the full exchange on Jan. 22:

WEIJIA JIANG, CBS News: Mr. President, a question on Iran. Initially you said repeatedly to Americans that after Iran retaliated for the Soleimani strike, no Americans were injured. We now know at least 11 US service members airlifted from Iraq. Can you explain the discrepancy?”

TRUMP: “No, I heard that they had headaches and a couple of other things, but I would say, and I can report, it is not very serious.”

TRUMP: “They told me about it numerous days later, you'd have to ask Department of Defense. No, I don't consider them very serious injuries relative to other injuries that I've seen. I've seen what Iran has done with their roadside bombs to our troops. I've seen people with no legs and with no arms, I've seen people that were horribly horribly injured in that area, that war. In fact, many cases put those bombs put there by Soleimani, who is no longer with us. I consider them to be really bad injuries. No, I do not consider that to be bad injuries no.”