It will be up to the military services to decide whether the wounded troops receive Purple Hearts. 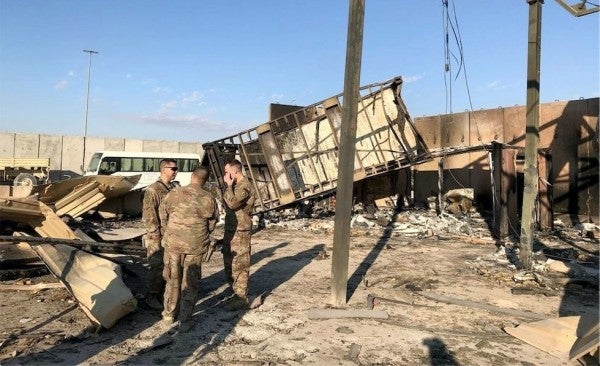 Eighteen of the wounded service members were medically evacuated out of Iraq for treatment, Hoffman said at a Pentagon news briefing. Of those troops: Eight service members were moved to the United States; nine remain in Germany; and one was sent to Kuwait and has since returned to duty in Iraq.

The remaining 16 wounded troops were treated in Iraq and have returned to duty, he said.

It will be up to the military services to decide whether the wounded troops receive Purple Hearts, Hoffman said. To be eligible for the Purple Heart, troops must be diagnosed with Traumatic Brain Injury as a result of enemy action and be removed from duty for 48 hours.

President Donald Trump initially said no U.S. service members had been harmed by Iran's ballistic missile attack on Al-Asad and Irbil. Trump later downplayed news that troops had been diagnosed with Traumatic Brain Injury after the attack.

“I heard that they had headaches and a couple of other things,” Trump told reporters on Wednesday. “But I would say, and I can report, it is not very serious, not very serious.”

The Defense Department has come under criticism for being slow to provide details on the numbers of U.S. troops who were injured by the Iranian missile attacks.

Hoffman explained that Defense Secretary Mark Esper was not informed about the wounded service members until they were moved to Germany.

Esper has ordered the acting undersecretary for personnel and readiness to review the Defense Department's process for tracking and reporting all injuries, not just Traumatic Brain Injury, Hoffman said.

“If you look at the different types of reporting systems that we have, sometimes the administrative reporting of an injury is different than the medical reporting,” Hoffman said. “We need to get that clarified.”