"It is estimated that approximately 200,000 Military Health System beneficiaries ... will transition to civilian providers," the memo says. 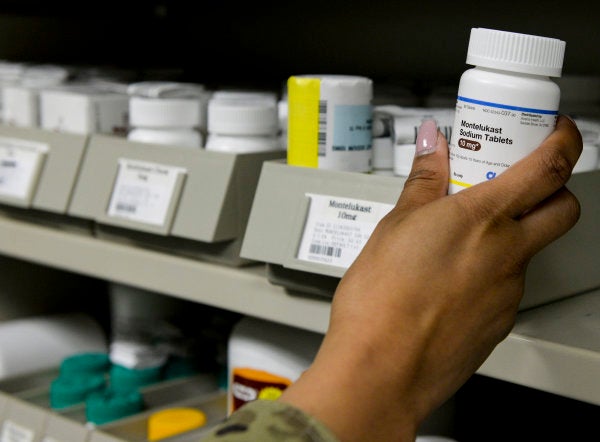 Military families and retirees receiving care through 38 military hospitals nationwide will soon be forced to go off-base instead, and some pharmacies at those hospitals will stop providing drugs to those not on active duty, Military.com has learned.

A 12-page memo, reviewed by Military.com, was sent to the commanders of 50 military treatment facilities, or MTFs, targeted for changes. It details for commanders the impacts of a planned MTF restructuring, the subject of an upcoming report to Congress. It also includes a letter to commanders explaining upcoming changes, signed by Lt. Gen. Ronald Pace, who directs the Defense Health Agency, and provides communications guidance to public affairs personnel.

The changes are a part of a review of military hospital operations and a system consolidation under the Defense Health Agency ordered by Congress in 2016. Aimed at increasing a focus on military readiness, the consolidation includes a plan to cut about 18,000 uniformed medical personnel and increase focus on active-duty support.

But to do so, the hospitals must cull the number of family members and retirees to whom they currently offer care. The report to Congress detailed in the memo lays out the Pentagon's path for those changes.

“DoD must adapt the military health system to focus more on readiness of the combined force, while continuing to meet our access to health care obligations for active duty families, retirees and their families,” the Feb. 3 memo states. “With a challenging array of threats around the world, we need our military medical facilities to keep combat forces healthy and prepare our medical personnel to support them.”

The memo does not include the locations of the 50 affected MTFs, or a specific timeline for the changes. It's also unclear how feedback from lawmakers might impact the current transition plan.

Under a section of the document noted as “not for public release,” the memo lays out a proposed plan to “reduce operations at 48 facilities and to expand or recapitalize operations at two others.”

At 38 of those 50 MTFs, “DoD recommends reducing the scope of operations to active duty and occupational health services only, while in many cases maintaining pharmacy services for all beneficiaries,” it states. “It is estimated that approximately 200,000 Military Health System beneficiaries who receive care at the MTFs identified for reduction in operations will transition to civilian providers” in the Tricare network.

That means that some of those facilities may stop offering pharmacy support for users not on active duty. On-base pharmacies are currently the only way for all Tricare beneficiaries, including elderly Tricare for Life enrollees, to receive no-cost, same-day medications.

Some military retirees and their families will also see increased out-of-pocket costs, the memo notes, since care received off-base by those users require copays.

The memo notes that no users will be cut from the MTF until they have a civilian provider from their community in place.

“Affected beneficiaries will continue to have access to quality health care, and we will not transition any beneficiary to the civilian Tricare provider network until we are confident they have a provider,” it states. “DOD intends to implement these changes with a careful, deliberate approach, maintaining access to high quality care for MHS beneficiaries while sustaining readiness … As patients shift to civilian providers, DoD will monitor network performance and slow or halt transitions as necessary to assure continued access to care.”

Tricare officials were unable to provide a timeline for rollout of the plan or a list of the 50 impacted locations, citing a need to delay comment until the report is delivered to Congress. That report is expected to be delivered as early as next week.

“Until the Defense Department's Report to Congress … is approved and released, the details in the report are still subject to change,” Kevin Dwyer, a Tricare spokesman said in a statement. “For this reason, we are not yet able to discuss the details. As Lieutenant General Place said in his letter to the commanders of our military hospitals and clinics, we recognized there will be concern, and many patients and staff will want to know as soon as possible what this means for them. Nothing is changing immediately, and all changes will be made in a deliberate and responsible fashion. The Department's obligation to our patients has not changed.”