Task & Purpose reporter Haley Britzky explains how she found out that a military policy meant to help victims of domestic violence may end up doing more harm than good, due to an unforeseen loophole. 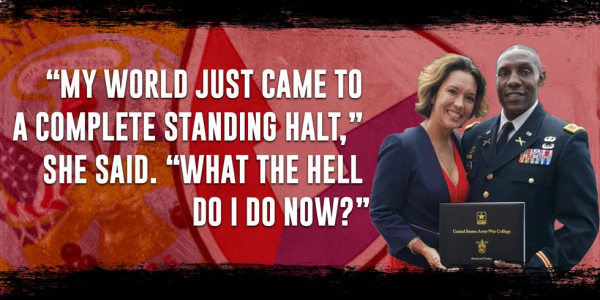 In December, Task & Purpose published a longform feature that explored domestic abuse in the military, the Pentagon's attempts to curb it, and how a policy loophole meant to support victims of spousal abuse has left the very people it's meant to help in dire straits.

Written by our Pentagon-based Army reporter, Haley Britzky, the story focused on Ellizabeth Grimes, who was allegedly assaulted by her husband, Army. Col. Jerel Grimes.

In the wake of the alleged attack, Ellizabeth was left to deal with a number of physical injuries that still require medical attention. Hospital records from that night say her injuries included a “closed head injury, hematoma, concussion, cervical strain, extremity contusion or fracture.” She also was put on medication she'd never needed before, to help with anxiety, depression, and nausea, as well as to help her sleep at night.

However, as a dependent of a service member, her health coverage is through Tricare, and once she divorces her husband — which she filed to do almost immediately after the attack — she'll no longer be a dependent, and no longer have Tricare. This will leave her to start over with new doctors. Additionally, because her husband hasn't been charged with anything, and hasn't been separated from the Army, she's unable to qualify for transitional compensation, which exists to help abused dependents retain their Tricare coverage.

Given the sensitive nature of reporting on domestic abuse, combined with navigating a nebulous Pentagon policy, Task & Purpose spoke with Britzky about how she found the story, what obstacles she faced while reporting it, and how we as a news site handle allegations of wrongdoing when criminal charges have been filed but no verdict has been reached in a court of law.

This is the third installment in the recurring column How We Found Out.

James Clark: Haley, on Dec. 12 you published a feature on a loophole in a military policy that was designed to help victims of domestic violence. Can you give me a brief overview of this story?

Haley Britzky:Sure, so this story centers on one woman — Ellizabeth Grimes — who reported being abused by her husband, an active-duty Army colonel. He allegedly choked her at their home in August until she blacked out, and broke her hand. Because of the abuse, she has extensive medical needs, and as a dependent of a service member she was receiving that medical care through Tricare. Once she divorces her husband, however, she'll no longer be under Tricare, and will have to start all over with new doctors and a new treatment plan. So the story focuses on this gap in medical coverage for some domestic violence victims.

JC: How did you first find out about this?

HB: Ellizabeth was looking for help — she sent an email to Task & Purpose, and as the Army reporter it falls into my bucket. So I reached out to her and we set up a time to talk, and went from there.

JC: Until you started working on this story, had you ever heard of this policy?

HB:No, I hadn't heard of transitional compensation, which is what the Pentagon put into place to try to help abused dependents of service members. So when I started reporting the story, I had no idea that in this policy I didn't know much about, there was going to be this gaping hole.

JC: Got it. So, what do you do next? How do you find the right people to talk to so they can explain how it works, so you can lay it out for your readers in plain english, and not dry policy jargon?

HB:Well honestly, Ellizabeth came with a lot of her own research. She'd been reaching out to people on her own long before she met me, so I had a good base of understanding of where she'd left off. I followed up with one of the experts she had already spoken with, who was able to break things down for me given he was familiar with her case.

I also started thinking about who I needed to contact on the military side — her husband's command, someone at the Pentagon who would be able to help get me statistics on domestic violence in the military, someone familiar with Tricare policy, and her husband himself.

It's essentially just going one step at a time: “Okay, here's the outline of this story. Here are all the questions I have, and all the things I don't know. Who can explain that to me? Who are the experts who know the most about this? What data is available to help fill in some of the blanks?” And you get one piece at a time, until (hopefully) all of your questions are answered.

JC: This story involves allegations of a crime. How do you navigate that gray area where you're reporting on an assault, but no one has been found guilty of it.

HB:Right, so that's difficult, as I think anyone would tell you. You're working on something so sensitive, and so painful for the person you're speaking with. But at the end of the day, he hasn't been charged with anything — he's innocent until proven guilty. So I wanted to focus on documents: the police reports, medical records, emails, etc. Details I got through interviews, I tried to back up with more evidence.

That's also why it was so important for me to reach out to him as many times as I did and leave voicemails, or ask his command for a chance to talk with him. He has every right to address these allegations, and I wanted to be sure to give him every chance to do so.

It's hard, if not impossible, to not become emotionally invested in something like this. But I just reminded myself: These are allegations, and they have to be presented that way. I am not his judge or his jury.

JC: Given that this is such a sensitive topic, I'd like you to explain why Ellizabeth Grimes was identified in this story. Oftentimes publications will not ID victims of domestic abuse by name. For those readers who aren't reporters, can you explain why that is, and then tell us why Ellizabeth's name was used here.

HB:So Task & Purpose policy is to not identify victims of abuse. I never planned to identify her — it could open her up to all kinds of harassment that she doesn't deserve. And I told her that we do not identify victims, but she told me she wanted to be identified. I double- and triple-checked, because I was hesitant to do so and I wanted her to know that we typically don't do that. But she told me, as I quoted in the story, that it's no secret because she'd been reaching out to so many people on her own.

I talked to Paul Szoldra, our editor-in-chief, about my concerns with naming her. He reminded me that it was her story. She wanted to be named, and she made that clear. I also talked to a close friend of mine in media and told her my concerns, and she said that if Ellizabeth wanted to do this, who was I to tell her she couldn't? It was brave of her, and I think it only lent more credibility to her story.

JC: Is there anything I didn't ask about that you'd like to draw attention to?

HB:I think I would just add how much I appreciate Ellizabeth trusting me to tell her story. She welcomed me into a very personal, and very painful period of her life — and as sensitive as I tried to be at every turn, reliving the worst day of your life over and over again to someone you just met three weeks ago is never going to get easier. Especially when you consider that nothing may come of this for her. She told me she's accepted that this story may not bring about any change to help her, but that she's hopeful it helps someone else. I think that's just incredibly admirable — if no one knows a problem exists, how can it get fixed? But being the first one to stand up takes a lot of bravery, and for that reason, hers is a story I won't ever forget.

Editor's Note: You can always reach out to Task & Purpose journalists through our confidential tip line: tips@taskandpurpose.com. You can also say hi to the reporter on this story via Twitter: Haley Britzky.