“I’m always trying to give back to this unit that has given me my marriage.” 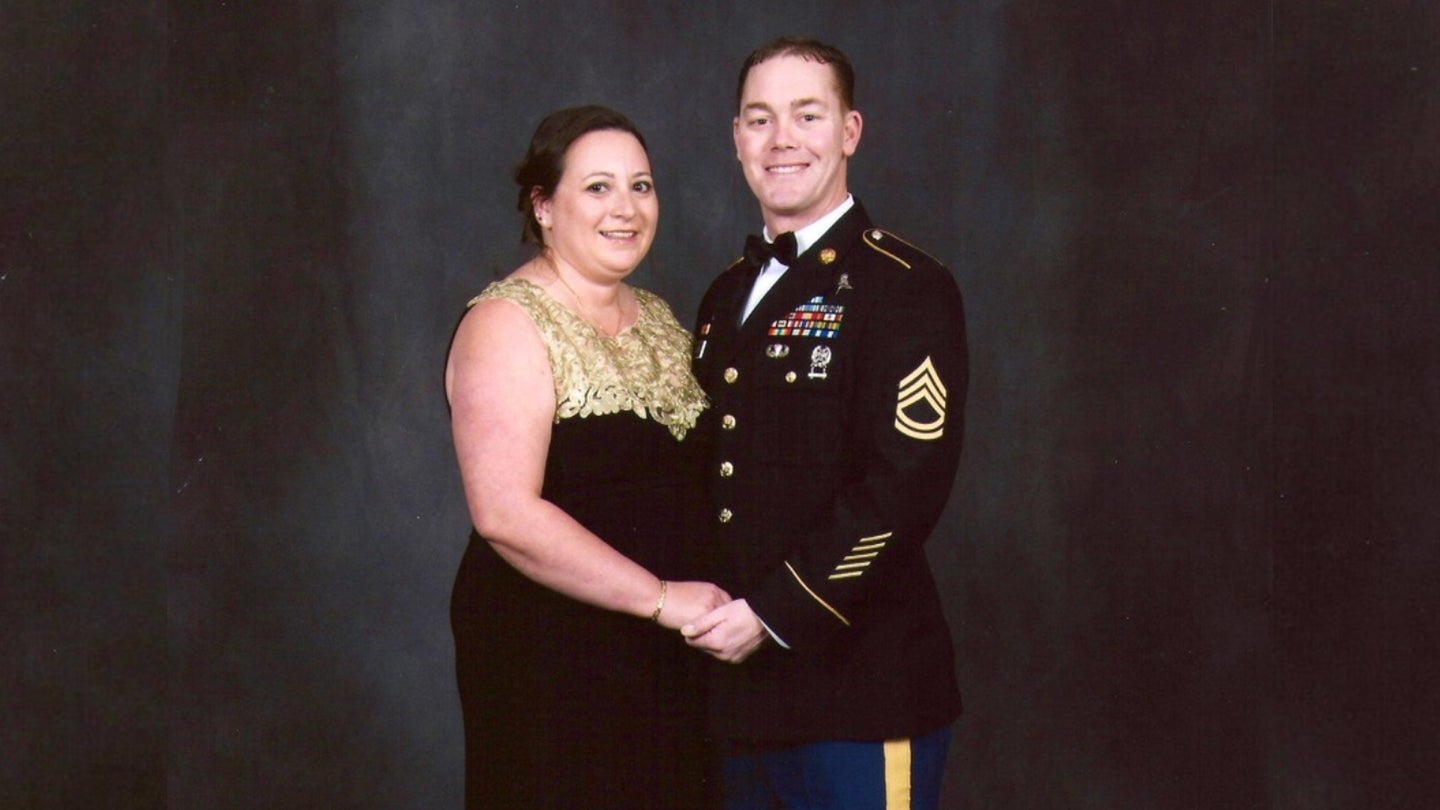 It was five in the morning on Mother’s Day, 2012, when Sgt. Richard Sloan got a call from his wife.

A member of the Army’s Golden Knights Tandem parachute team, Sloan was in Hampton, Virginia, for an air show. He’d gotten up early to go for a run before he started his day when his wife Denise, who was pregnant with their second child at the time back at Fort Bragg, North Carolina, called him. He remembers seeing his team leader in the hallway who asked if Sloan wanted to come run with him, but Sloan could tell that his wife was upset. Something was wrong.

He quickly realized that his wife, who he has been with since he was 16 years old, was having a miscarriage.

In the Golden Knights hangar in North Carolina in October, Sloan — now a sergeant first class with more than 6,000 jumps under his belt — recently spoke with Task & Purpose about the tragic loss of their second baby, the difficult time he and his wife experienced afterwards, and the unyielding support he felt from his team and leaders. He said his team leader, who had his own personal experience with pregnancy complications, told Sloan to call him when he was ready to come back.

It made all the difference, Sloan said.

Though this happened years before the Army announced its “People First” initiative in 2020 that Army leaders have pushed relentlessly ever since, it’s a clear example of what it actually looks like in practice: Allowing a soldier to really put their family first at a time when it’s needed most. Supporting them, instead of shaming them. Not making them choose between being there for their family in the midst of a tragedy, or being at PT in the morning.

It’s not exactly typical that you hear a service member talk about how the military saved their marriage. If anything, it’s usually the opposite. But Sloan, who enlisted in 2003 as an information system analyst and joined the Golden Knights in 2010, is adamant that the Army has.

“I’ll never forget it,” Sloan said of the support he received. “I always feel like I’m always trying to give back to this unit that has given me my marriage.”

‘Call me when you’re ready’

When Sloan realized that day in 2012 what was happening back home — that Denise was rushing to the emergency room at Fort Bragg, North Carolina — he told his team leader, Sgt. 1st Class John Dallas (JD) Berentis.

“I don’t think a lot of men understand how many pregnancies can end in a miscarriage,” Sloan said. But Berentis did. So he gathered the rest of the team, called their pilots, and “within 25 to 30 minutes we were boarding the aircraft and leaving for Fort Bragg,” Sloan said.

That’s not an easy thing to coordinate, especially after an air show — there is “a lot … that they have to redo” after an air show, and “certain block times that you have to take off.” At the time, Sloan had only been with the Golden Knights for 20 months. But JD and another team leader, Sgt. 1st Class Chris Acevedo, “jumped through hoops” to get him home.

It was about an hour flight back to Fort Bragg, and before they landed, Sloan recalled Berentis telling him to get his things together and “do what you’re told.” The second they touched down, Sloan saw another teammate driving a van out to the plane. Within minutes, Sloan was out of the plane and in the van as that same teammate drove him straight to Womack Army Medical Center, the hospital on Fort Bragg where his wife was being treated.

When he arrived, Denise was still in the emergency room being assessed. She was “hemorrhaging pretty bad,” and was taken in for surgery. As Sloan sat and waited, nurses came out to tell him they were having “some really tough times with Denise” and reported that her heart had stopped twice during surgery, he said.

Through it all, as Sloan sat and waited for more information about his wife’s condition, a few of his teammates sat with him. When they heard that his wife was okay, and she was out of surgery, “my boss said ‘Hey, you call me when you’re ready.’”

Sloan didn’t return to work for 35 days, and even afterwards he was able to take care of his daughter as his wife recovered and “went to a couple shows with some painted toenails,”  supporting his wife through a bout of depression. A spouse’s mental health typically isn’t talked about, Sloan said, but he found that his leadership did. They’d ask how Denise was doing, and when he responded that she was healing well, they’d gently push more: “No, no, no, how is she doing, Rich?” they would ask.

Over time, the burden of the tragedy they experienced got easier to carry; their family started healing, and about three years after losing their second child, the Sloans welcomed a little boy named Reese.

“They saved our marriage,” Sloan said of his team. “Because I think if it was in a lot of places and jobs and you weren’t home for that straight amount of time, it would have been catastrophic, mentally. And also my daughter would have been like, ‘What’s going on?’ She didn’t really understand that.”

And the thing is, while Sloan loves serving in the Army and as a Golden Knight, full-time military service is just one part of his life. At the end of the day, he said, that career is temporary — but his marriage isn’t, and thanks to the leaders who were in his life at the time, he was able to be there for his wife when she needed him most.

“The military is only going to be there for so long in your life when you’re full time, 20 years, 25, maybe 30 if you’re lucky,” he said. “And someday, your children are going to leave the home and it’s you and your spouse. And if you don’t have that teammate, you’re going to be losing out quite a bit in life I think.”