This agile copter could be the Army’s next scout helo 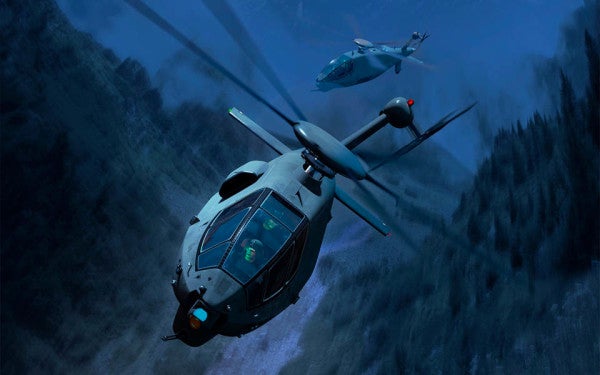 Buckle up, soldiers: Boeing just unveiled a brand new helicopter that could become the Army's next scout helo of choice.

After months of anticipation, Boeing on Tuesday finally revealed its bid for the Army's Future Attack Reconnaissance Aircraft (FARA) competition that's intended to replace both the Army's retired OH-58D Kiowa Warrior scout copters and half of the service's AH-64 Apache fleet in the coming years.

The airframe also features tandem seating and “a modular, state-of-the-art cockpit with a reconfigurable large area display and autonomous capabilities,” according to Boeing.

According to Defense News, the Army wants its selection for the FARA program to be capable of cruise speeds of at least 180 knots at altitudes of 4,000 feet.

“We listened to the Army, assessed all alternatives, and optimized our design to provide the right aircraft to meet the requirements,” Boeing FARA program manager Shane Openshaw said in a statement. “We are offering a very reliable, sustainable and flexible aircraft with a focus on safety and the future fight.”

Boeing is one of five competitors vying for a chance at the Army's FARA contract alongside Bell Helicopter, Karem Aircraft, Lockheed Martin-owned Sikorsky, and a partnership between AVX and L3.

Two of those competitors will eventually furnish the Army with prototypes for a potential fly-off in 2023, per Defense News, with plans for a production decision on the new scout copter no later than 2028.

“We’re offering more than a helicopter – we’re offering an affordable and fully integrated system for the Army, the mission and the future,” Boeing Phantom Works general manager Mark Cherry said in a statement. “We’ve blended innovation, ingenuity and proven rotorcraft experience with extensive testing and advanced analysis to offer a very compelling solution.”

Check out Boeing's sizzle reel for its FARA offering below:

Take a look at #BoeingFARA! This agile helicopter is purpose-built for the @USArmy’s evolving missions. pic.twitter.com/0JeHzrQqdT