A small but critical defect has ‘crash landed’ Apache readiness, according to a top Army general

More than a year after the Army ordered the inspection of a critical safety part in every AH-64 Apache aircraft in the service's fleet, soldiers have spent the equivalent of nine months in extra man-hours retrofitting the airframe so far, a task that has "crash landed" back on combat readiness 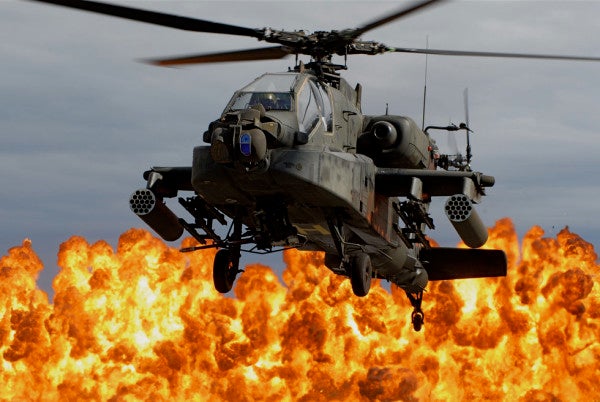 More than a year after the Army ordered the inspection of a critical safety part in every AH-64 Apache aircraft in the service's fleet, soldiers have spent the equivalent of nine months in extra man-hours retrofitting the airframe so far, a task that has “crash landed” back on combat readiness, a top Army official said on Monday.

On Monday, the head of Army Forces Command revealed that soldiers had sunk an eye-popping 6,672 man hours working their way through the 653 AH-64s in the Army's fleet with the hopes of completing the retrofit by December 2019.

As a result of the undertaking, “readiness has suffered,” Lt. Gen. Laura Richardson said at the Army Aviation Association of America in Nashville, Tennessee, adding that the fleet-wide retrofit “put the enterprise in a proverbial tailspin, which crash landed on the backs of our soldiers and our units.”

In February 2018, Army Aviation and Missile Command (AMCOM) guidance previously obtained by Task & Purpose expanded more rigorous inspections of each Apache's strap pack nut (the component that keeps the rotor blades from separating from the airframe) from “severe coastal” to “all AH-64 aircraft, regardless of location,” suggesting an underlying mechanical issue.

A month later, the Pentagon temporarily ceased accepting deliveries of the AH-64E 'Echo' Apache from Boeing due to a “critical” safety issue over the copter's strap pack nut, as Defense News first reported in April 2018.

But part of the problem, according to one Apache aviator who spoke to Task & Purpose on the condition of anonymity, is that Boeing's solution to the strap pack issue — the so-called “mega-nut” furnished to the Army last year — has since been recalled, leaving Army personnel to rely on using legacy strap pack nuts with retention collars as a temporary solution.

“There is a total lack of faith in Boeing's commitment to keeping the aircraft safe, and while we were encouraged by [Chief of Staff Gen. Mark] Milley's decision to stop receiving AH-64s from Boeing during the strap pack fiasco, many of us felt the Army didn't go far enough,” the aviator told Task & Purpose.

The Army is currently retrofitting Apaches at a rate of two battalions a month, the service previously announced, with airframes operating near coastal areas being first to receive the new mega nut, since salt water has a greater effect. But as the Apache aviator previously told Task & Purpose, the delays aren't just hurting readiness, but overall morale as well.

“The Army is continuing to fly the fleet of AH-64s, accepting the risk, knowing the issue, and using increased inspections and distilled water rinses to mitigate the risk,” the aviator told Task & Purpose. “The pilots aren't a fan of that tactic.”

SEE ALSO: Confessions Of An Apache Pilot: What It's Like To Fly The Military's Most Heavily Armed Attack Helicopter

WATCH NEXT: An Apache Tests a High-Energy Laser