The Army has ordered aviation techs to widen their search for a broken part that can send Apache helicopter rotors... 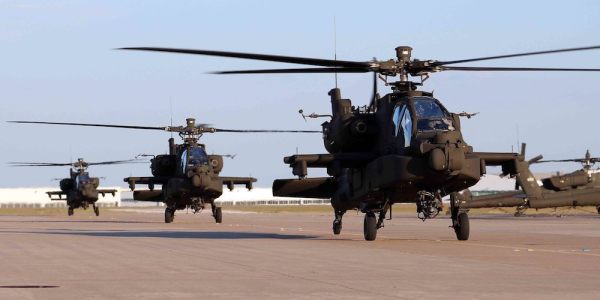 The Army has ordered aviation techs to widen their search for a broken part that can send Apache helicopter rotors catastrophically ripping loose mid-flight, according to documents obtained by Task & Purpose, a terrifying defect that has resulted in recent deadly Apache mishaps.

In April, Defense News reported the Pentagon ceased accepting deliveries of the AH-64E ‘Echo’ Apache months earlier due to a “critical” safety issue over the copter’s strap pack nut, the component that keeps the rotor blades from separating from the airframe. But a February Army Aviation and Missile Command (AMCOM) guidance goes even further by explicitly expanding new inspections from Army aircraft flown in “severe coastal” areas to include “all AH-64 aircraft, regardless of location.”

The Safety of Flight guidance, dated February 18 and framed as an addendum to earlier inspection guidelines issued on October 23, 2017, also lays out new pre- and post-flight inspection routines. But many Apache pilots believe the Army is recklessly passing on this risk to its aircrews without actually fixing the systemic problem.

“The Army is continuing to fly the fleet of AH-64s, accepting the risk, knowing the issue, and using increased inspections and distilled water rinses to mitigate the risk,” one Apache aviator, who asked for anonymity out of concern for their career, told Task & Purpose. “The pilots aren't a fan of that tactic.”

The threat of corrosion is a constant enemy of airframe integrity for aviators operating in coastal areas. Indeed, the failure of the strap pack nut was responsible for the in-flight rotor separation and crash of an Apache AH-64D in Galveston, Texas on December 28, 2016, killing both soldiers on board. The Pentagon’s halting of Apache Echo variants in April triggered yet another update to the guidance regarding inspections.

“The Army has issued ‘Safety of Flight’ messages requiring units to increase standard maintenance inspections of the strap packs,” AMCOM confirmed to Task & Purpose in a May 15 statement. “As part of that process, the units are also executing daily borescope inspections of the main rotor strap pack retention nuts for all Apache models.”

The new procedures for assessing the faulty component are primarily focused on increasing the frequency of inspections, according to AMCOM, a major problem facing airframes across an increasingly strained aviation fleet. They include visual borescope inspections of all airframe strap packs prior to every Apache flight, and, according to the Army aviator, “distilled water rinses of the strap pack nut after the last flight of the day.”

The active-duty aviator claimed that Army engineers have identified “over a dozen” cracked strap pack nuts on Apache airframes since the new inspection procedures were implemented in February, as well as dozens more strap packs that were “replaced or removed due to unsatisfactory condition or evidence of corrosion.”

AMCOM could not provide information regarding how many Apache aircraft had been designated non-mission capable as a result of the additional inspections, citing the branch’s PEO Aviation office as the primary release authority.

“These inspections, some which occur daily, look for corrosion, sealant errors and/or strap pack nut cracks,” AMCOM said. “This is an additional requirement for our soldiers and crews, but this is how we are currently working to mitigate risk and keep the fleet safe to fly.”