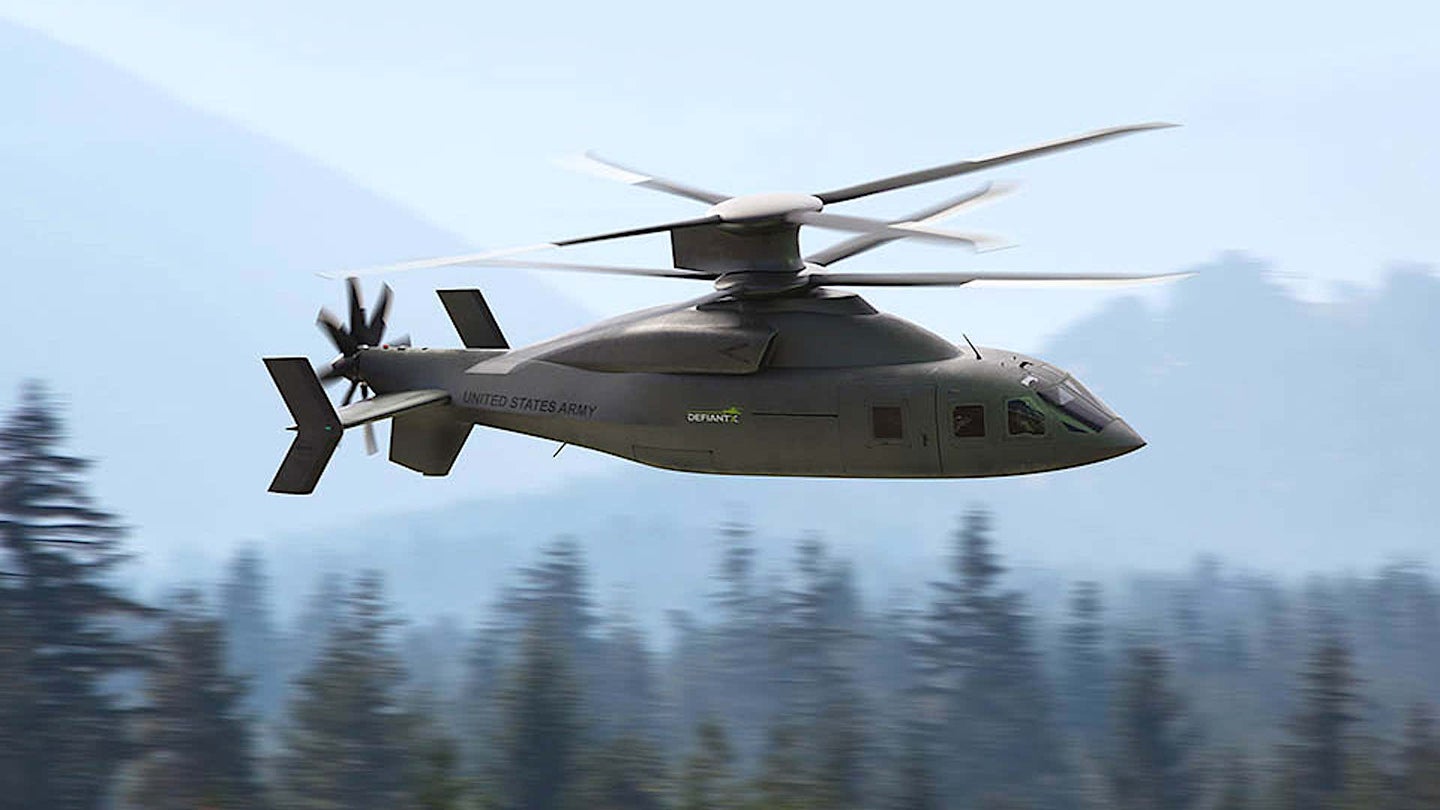 Aerospace giants Boeing and Sikorsky have unveiled a next-generation helicopter that, with any luck, might end up replacing the Army’s fleet of UH-60 Black Hawk helicopters.

The so-called Defiant X is a compound coaxial helicopter based on the partnership’s earlier SB>1 Defiant design that first took flight in 2019. The Defiant X will face off against Bell and Textron’s V-280 tiltrotor aircraft in the service’s Future Long-Range Assault Aircraft (FLRAA) program.

While it may look like an attack submarine had a baby with a Black Hawk, the Defiant X is, for all intents and purposes, a muscular troop carrier designed to insert U.S. forces into the most hostile of environments with increased speed and previously-unseen versatility for a rotary-wing aircraft.

The SB>1 Defiant was itself essentially a bigger, badder version of Sikorsky’s S-97 Raider, which had an unusual coaxial rotor system “designed to fly at twice the speed and range of today’s conventional helicopters and offers advanced agility and maneuverability,” according to Sikorsky and Boeing.

Compared to the earlier SB>1 Defiant, the Defiant X offers “enhancements to improve aerodynamics and reduce the thermal signature,” as Sikorsky and Boeing said in a statement, enhancements that will provide soldiers “with increased maneuverability and survivability in high-threat air defense environments, allowing them to penetrate enemy defenses while reducing exposure to enemy fire.”

The SB>1 Defiant previously achieved a flight speed of 211 knots back in October 2020, reaching 232 knots at its top descent speed, according to Military.com.

The FLRAA program, formally initiated in 2019 under the service’s Future Vertical Lift (FVL) program, is intended to field a new long-range attack helicopter for the service by fiscal year 2030 as a potential replacement for both the Black Hawk and, potentially, the service’s AH-64 Apaches.

The Black Hawk currently comes armed with twin 7.62mm machine guns, while the Apache is generally outfitted with an M230 30mm cannon, Hydra-70 2.75-inch rockets, and Hellfire missiles. If the Defiant X is going to replace both the Black Hawk and the Apache, then it’s going to need to pack a ton of firepower — hell, it might even come out looking less like a submarine crossed with a helicopter and more like a flying torpedo bristling with weaponry.

The Defiant X “will be the fastest, most maneuverable, and most survivable assault helicopter in history,” Sikorsky and Boeing said in a statement. “Combined with the team’s unsurpassed experience in mission systems, training, and sustainment, it will revolutionize the way the Army meets threats in 2035 and beyond.”

The unveiling of the Defiant X comes nearly a year after the Army selected Bell-Textron and Boeing-Sikorsky to move forward as part of the FLRAA’s Competitive Demonstration and Risk Reduction Program (CD&RR) program, the two-year transition period from technology demonstrators to “competitive aircraft,” according to the Congressional Research Service.

“Defiant X is purpose-built for a modernized Army that requires expanded reach, survivability, and lethality,” said Steve Parker, vice president and general manager of Boeing Vertical Lift, in a statement. “This weapon system will give Soldiers unequaled technological advantage and connectivity over adversaries in a multi-domain battlespace.”

The Army is expected to deliver a formal contract award for either the Defiant X or the V-280 Valor by some time in the second quarter of fiscal year 2022.