Why Did I Publish That Column Promoting Hazing And Ass-Chewing?

Because I suspect that support for hazing is a lot more widespread in the military than people recognize, and I wanted... 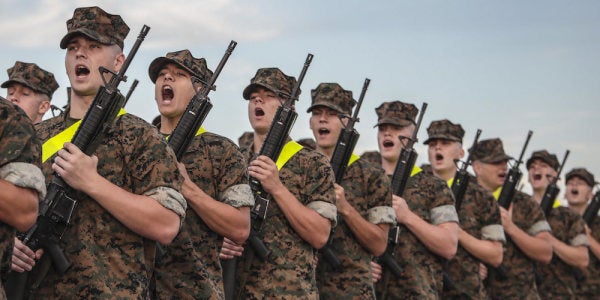 Because I suspect that support for hazing is a lot more widespread in the military than people recognize, and I wanted to get a discussion of hazing on the table.

You may disagree with that approach. Clearly many people in the Twitterverse do. That is their right.

OK, here is what I object to: The belief of some people that I shouldn’t publish things with which they disagree. I got a torrent of notes demanding that I delete the piece, take it down, etc.

This seems to me a new way of thinking in America, that articles with which one disagrees should not appear, but if they do, they should promptly disappear.

I’m a First Amendment fundamentalist. All speech is and should be protected. Because if you don’t do that, someone one day may decide that your own speech should be deleted.

Yes, yours. No matter how much you like it.

The question then becomes, What is the line? No, I wouldn’t publish something that I considered racist (though I would strongly support its right to be published by someone else — repugnant speech is protected under the First Amendment). What about something trickier, like an article that purports to offer solid new data on a pending question such as whether women should be allowed to be in the infantry? This gets us onto thinner ice, but I think that when you get to current controversies, then the bias should be toward publishing, toward airing objections and examining differences.

I damn sure don’t think that something should be rejected just because it might upset somebody. One old proverb of American journalism is that it should comfort the afflicted and afflict the comfortable. I've never been entirely at ease with that view. I think rather our job is to tell the truth as best we can and let the chips fall where they may, upon the afflicted and the comfortable alike.

But the worst reason in the world not to publish something is because doing so might make someone uncomfortable.

SEE ALSO: What Carries You Through The Hard Parts Of Combat Isn’t Hazing — It’s A Good NCO