‘For Heavens Sake Stop It’: How A WWI Army Officer Stopped Friendly Fire From Hitting His Men 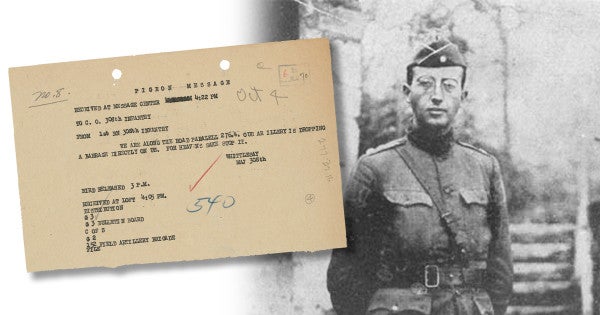 “FOR HEAVENS SAKE STOP IT.”

That's how Maj. Charles Whittlesey closed his short message — delivered by carrier pigeon — to his higher headquarters asking them to cease firing artillery on his position.

The National Archives tweeted Whittlesey's message on Thursday, shining a spotlight on one of his actions as he led his “Lost Battalion” of American infantry that was surrounded during World War I.

In October 1918, the Germans encircled Whittlesey's 1st Battalion of the 308th Infantry, after the officer had successfully attacked into the German lines while other units on his flanks were repelled.

Later during the five-day siege, American artillery units began pounding the area, believing they were striking German targets. Instead, they were hitting Whittlesey's own troops.

This was long before sophisticated communications systems. So Whittlesey resorted to the radio of the day: a carrier pigeon named Cher Ami.

The Smithsonian has more:

Cher Ami was a registered Black Check cock carrier pigeon, one of 600 birds owned and flown by the U.S. Army Signal Corps in France during World War I. He delivered twelve important messages within the American sector at Verdun; on his last mission, October 4, 1918, he was shot through the breast and leg by enemy fire but still managed to return to his loft with a message capsule dangling from the wounded leg. The message Cher Ami carried was from Major Charles S. Whittlesey's “Lost Battalion” of the Seventy-seventy Infantry Division that had been isolated from other American forces. The message brought about the relief of the 194 battalion survivors, and they were safe behind American lines shortly after the message was received.

The French government awarded the bird the Croix de Guerre. Whittlesey later received the Medal of Honor for his heroism in maintaining his position despite being cut off by an overwhelming enemy force, having no supplies or rations, and losing roughly 50% of his 46 men to combat.

“On the 4th day Maj. Whittlesey received from the enemy a written proposition to surrender, which he treated with contempt,” his citation says.

Here's the full message Whittlesey composed, which was successful in stopping friendly artillery fire from continuing to shell his position:

WE ARE ALONG THE ROAD PARALELL 276.4. OUR ARTILLERY IS DROPPING A BARRAGE DIRECTLY ON US. FOR HEAVENS SAKE STOP IT.