On a recent Saturday morning, residents of Skwierzyna, a sleepy town in western Poland, awoke to news that a local... 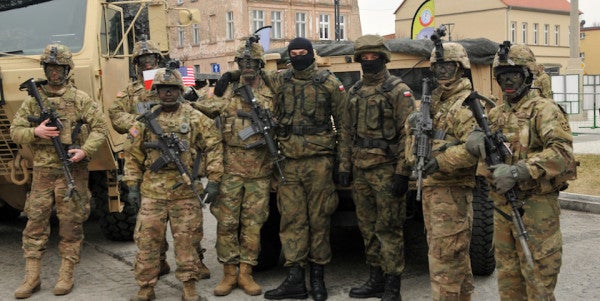 On a recent Saturday morning, residents of Skwierzyna, a sleepy town in western Poland, awoke to news that a local dentist and his two sons had been viciously assaulted during the night by a trio of English-speaking toughs.

Now, investigations are underway to determine whether the assailants were American service members.

“We take any allegations of soldier misconduct seriously and are fully cooperating with Polish authorities,” Master Sgt. Nathan Hoskins, a spokesman for the Atlantic Resolve Mission Command Element in Poznan, Poland, told Army Times in an email. “We appreciate the strong partnership we have with our Polish allies and surrounding community.”

Although the Army is refusing to disclose specific details about the incident — which occurred on the evening of Oct. 5 — until “the investigation is concluded,” local news reports cited by Stars and Stripes paint a troubling scene that unfolded after the suspects allegedly starting banging on an apartment door.

According to the reports, an attempt by the dentist and his sons to quell the raucous resulted in all three being thrashed so savagely that an ambulance was called. The culprits fled the scene.

As Stripes notes, Skwierzyna is about 60 miles from the city of Poznan, where the U.S. Army maintains a force of approximately 5,000 troops to deter potential Russian aggression along NATO’s eastern flank. The Army also garrisons armor brigade soldiers in Skwierzyna. Whether or not the suspects are stationed there, the Army will not say. No other identifying information has been released.

To what extent the bloody ordeal will impact the strategic relationship between the U.S. and Poland remains to be seen. The latter would like the U.S. military to establish a permanent base on its soil and has even offered to pay for it.

Polish President Andrzej Duda said during a visit to the White House last month that the new garrison could be called “Fort Trump.” The proposal seemed to be well received by the American president.