If you’ve been anxiously waiting for the next great brooding naval war flick, where the sonar pings from a glowing... 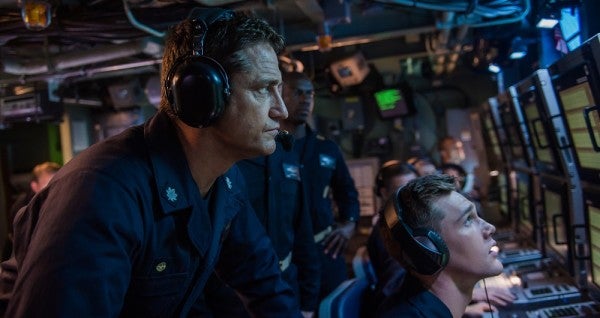 If you’ve been anxiously waiting for the next great brooding naval war flick, where the sonar pings from a glowing control panel are all the crew (and you the viewer) have to navigate the dangers ahead, then Hunter Killer will likely let you down.

But if you are looking for a balls-out action flick with a few erroneous “oorahs,” a serious moto-boner for challenge coins that’s never explained on-screen, and over-the-top shootouts — on land, at sea, and at the bottom of the ocean — that’ll leave you cringing, laughing, but nonetheless entertained, then Hunter Killer may be more your bag.

Premiering Oct. 26, Hunter Killer is based on the novel Firing Point, an actual military thriller by George Wallace, a retired Navy submarine commander, and author Don Keith. Directed by Donovan Marsh, Hunter Killer features Gerard Butler as U.S. Navy Capt. Joe Glass, alongside Gary Oldman as Chairman of the Joint Chiefs of Staff Charles Donnegan, and Common as Rear Adm. John Fisk. Think of it as Olympus Has Fallen, but on a submarine: Both star Butler saving presidents from doomsday plots, use non-stop action to drive the movie forward, and they avoid long pauses and building up tension like the plague.

The two-hour action flick — and not-so-subtle U.S. Navy recruitment spot — kicks off with a submerged boom. An American submarine in Russia’s Barent Sea has gone missing — taken out by a rogue Russian vessel — but all anyone stateside knows is that it’s vanished. Naturally, another sub is dispatched to find it. Enter Glass, who’s recently taken command of a Virginia Class attack submarine, and upon getting his orders, addresses the crew in one of the films few authentic pieces of dialogue: A moto speech.

Speaking over the boat’s comms, Glass reminds his sailors that unlike the other Annapolis grads in the unit, as a former enlisted-man, he knows the rank-and-file. He’s turned wrenches, pulled late-night watches, and missed birthdays. Glass knows what’s required, so you better do your damn job, or he’ll kick you out of the way and do it himself.

With that, the address ends with a rousing… Oorah?

While the line has led to a lot of head scratching, Butler may have been doing his best to give an in-the-know hat-tip to the submariners he sailed with while preparing for the film, something he addressed during a recent press conference at the Pentagon.

“It’s become popular with the submarine community over the last five or ten years to do that,” Wallace, one of the authors of Firing Point, told Task & Purpose. “Back in my day, we didn’t say ‘oorah.'”

But Wallace said that Butler and director Marsh spent several days aboard the USS Houston while preparing for the film and heard the commander use the term.

“They picked that up to add an air of authenticity to his speech,” Wallace added. “At that point it was a moment of high tension. He was preparing his crew to go into battle and he was doing anything he could to motivate them.”

Properly motivated, Glass and his crew set off to discover the lost American sub — after which the plot quickly thickens until it gets downright murky and disorienting.

A Navy SEAL team chock full of operator beards, ball caps and a clean-shaven “FNG” with a neck tattoo is dispatched to gather intel on the ground. After HALO-jumping through a thunderstorm, the SEALs make their way deep into Russian territory and discover that the Russian president has been taken hostage by his own defense minister, who aims to launch a first strike against the United States and then claim his place atop the ash heap. Bozhe moi?! A daring mission is set in motion to prevent World War III — because sending a bunch of SOF guys into a sovereign country to abscond with a nation’s leader and then slip out on an American attack sub is sure to help international relations.

For the most part, Hunter Killer delivers when it comes to boilerplate submarine movie scenes: Sailors stare at monitors as they navigate their vessel past mines and sonar buoys. There are underwater shootouts between subs, evasive maneuvers against torpedoes, and another rescue mission, this time to save a Russian submarine crew led by a doppelganger of Sean Connery’s character from The Hunt For Red October, in this case, he’s played by Michael Nyqvist.

After four Navy SEALs demolish a company’s worth of Russian troops (thanks in large part to a wildly liberal use of headshots, some from half-a-mile away), we get a predictable, but nonetheless entertaining game of chicken between the American submarine, a Russian destroyer, and a dozen incoming missiles. And of course, there’s the mandatory moment in all sub-flicks where catching a falling wrench at the last possible second means the difference between certain death and salvation.

While Hunter Killer offers up a few tense’ish moments, that’s about as close as it comes to being a military thriller. This has as much to do with pacing as it does the plot and dialogue — tweaks required to translate the 700-page novel to the big screen.

“We hate to see anything get cut, but this would have been a weeklong movie if there hadn’t been changes,” Don Keith, who wrote Firing Point alongside Wallace, told Task & Purpose.

“To take what really happens in and try to put it up on the big screen would probably bore anybody to tears, because it’s literally hours and hours of boredom and seconds of sheer terror,” Wallace said.

As a result, the timeline was compressed, and distances between the warships shortened.

“If you’ve seen that movie, the ranges are hundreds of yards, whereas in real life we’re dealing in thousands of miles,’ Wallace said. “Trying to get that on camera — you’d see one dot and five miles away you’d see another dot. It doesn’t lend itself to the camera. It might be unrealistic, but it’s necessary to move the story from the book to the big screen.”

Maybe that’s true, though other films in the same genre have managed. But then, that’s the difference between, say, The Hunt For Red October, and Hunter Killer: One wants to give viewers a non-stop thrill ride, and the other understands that those long moments of silence are all that’s keeping the crew alive, and the audience interested. It shouldn’t be hard to guess which one of the two is a military thriller set on a submarine, and which one is Olympus Has Fallen set in a metal tube — and slowly sinking to the bottom of the ocean.

SEE ALSO: Actor Gerard Butler Has Given More Pentagon Briefings In The Past 5 Months Than The DoD’s Spokeswoman