We salute Dream Doodles, the airman whose comics show the hilarity of Air Force life

"I’ve had so many silly moments where I’ve thought ‘am I the only one who goes through this?’” 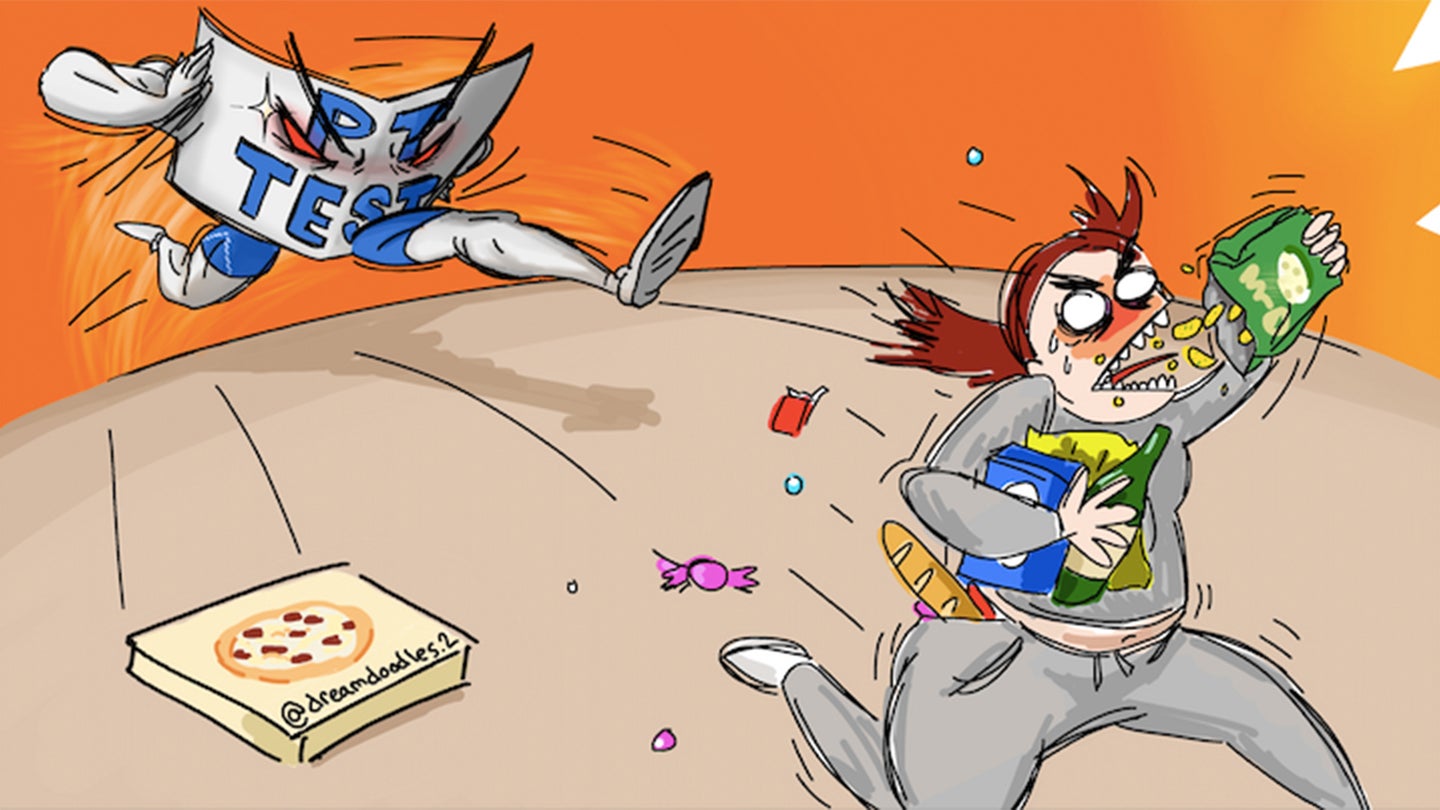 Move over Terminal Lance, there’s a new military web comic in town and it’s putting a silly face on the everyday trials and tribulations of life in the Air Force. Run by an airman named Andrea (who opted to leave out her rank and last name due to privacy concerns) stationed at Minot Air Force Base, North Dakota, Dream Doodles is all about the little things: like doing a whole load of laundry that’s nothing but green socks, or getting your credit card mixed up with your Common Access Card: or getting a rush of freezing wind down your pants as you’re trying to do a PT run in North Dakota.

Though Andrea started Dream Doodles on Instagram only three months ago, her colorful images have already gained a devoted fanbase on social media, where other airmen comment that they’ve experienced the exact same things.

“This one is so me,” wrote one commenter on Instagram reacting to a doodle about how standard-issue green socks somehow end up at different lengths and colors after going through the wash a few times.

“The number of times I have tried to pay for gas with my CAC [card],” wrote another, reacting to a doodle about the struggles of mixing up your military ID card with your credit card.

Capturing the unexpected bumps and blunders of military life was part of what inspired Andrea to start Dream Doodles. A lifelong artist, Andrea grew up tracing her mom’s magazine covers with paper, pencil and crayons. Later on, she took college art classes and tried her hand at painting, watercolors and digital art. The airman sees drawing as both an outlet and a challenge to translate what she’s thinking and feeling onto a medium people can see.

“Sometimes you envision what something’s going to look like, and then you try and have your hand agree with what your brain is trying to tell you,” she said. “It might come out the way you think it’s going to, or it’ll be something completely different.”

Andrea found a lot of material to work with when she joined the Air Force in 2012. Many of her family members worked in the aerospace industry, and her aunt was an Air Force veteran who convinced her that Big Blue was the way to go. Now an operations and training expert, Andrea’s job at Minot is to make sure all the security forces, helicopter pilots, missileers and other airmen at the base have what they need to do their jobs.

“Operations is kind of a wide net, so I get to work with a lot of people, which I think is really cool,” she said.

But what led to Dream Doodles? Andrea said she always wanted to get into digital art. Choosing what to draw was the challenge.

“I thought, ‘well what am I going to draw?’ Oh I know, I can draw what I dream of, because I have pretty vivid dreams and I remember them,” Andrea said. “But then 2020 hit and they all turned into weird nightmares and nonsense.”

But even the coronavirus pandemic couldn’t delay Andrea’s drawing goals for long. By the time 2021 came around, the airman was telling herself to just “get a drawing pad and do it. Do what you’re thinking of, and I think about work a lot,” she said.

Andrea kept the name Dream Doodles, but now instead of drawing dreams, she decided to focus on the silly moments that happen amidst the serious business of national security. That could mean anything from having a crush on Jeff, the sweater-vested character from the DoD’s infamous cybersecurity training program, to the consternation of not being able to read an officer’s rank tab from far away.

“I knock on wood because I don’t want to curse myself, but it’s been easy so far” to think up new material for the weekly strip, Andrea said. “Because I’ve had so many silly moments or things that I’ve goofed up on, or interesting, weird things where I’ve thought ‘am I the only one who goes through this?’”

Spoiler alert: she’s not. Check out any comments section for Dream Doodles and you’ll find plenty of people empathizing with Andrea’s everyday struggles and triumphs. Some of the highlights include the agony of being assigned more work to do as punishment for doing a good job on an earlier task, or the breath-taking tangle of cables found in the base comm closet, which closely resembles the Devil’s Snare vine trap in Harry Potter and the Sorcerer’s Stone.

“Lol; this is called the truth,” said one reader about the comm closet doodle.

“Yup, this is about right,” said another, about a doodle where the hapless Andrea stumbles into a dark room full of bat-like night shift intel officers huddled around a war-gaming table.

Like many other comics, the night shift comic ends with Andrea running away with a terrified expression on her face. Terror is one of the many facial expressions Andrea excels at capturing. She credits that skill to her love of manga, anime and cartoon shows such as Sailor Moon, One Punch Man, and Rick and Morty, as well as fellow Instagram artists like Sarah Andersen.

“I see the elements of manga creeping in sometimes,” Andrea said. “One of my friends looks like One Punch Man so he was like ‘put me in there as one of the background characters!’ And I was like ‘all right but you’re going to look a lot like One Punch Man.’”

Besides One Punch Man, Andrea also notices in her work the silly eye pupils of Rick and Morty, the tongues of The Simpsons characters when they’re mid-scream, and the square grimacing mouths that are often used to signify comic horror or dread in anime shows.

“It’s really interesting just to see where my subconscious is pulling these things from sometimes,” Andrea said. “Like ‘oh that’s from my childhood,’ or ‘oh that’s from Sailor Moon when I watched it a lot as a kid.’”

Besides glitchy government software and the frigid winds of North Dakota, there’s another theme of Andrea’s work that sets her apart from other artists, and even other service members. Hint: it has to do with nail polish, hair regulations, and the government’s habit of ruining your portrait for a security clearance photo. But Andrea said she didn’t set out to be the female voice of military webcomics. She just happens to be one.

“A lot of women on Reddit say ‘oh my God, I’ve been called out,’ but this isn’t really aiming for anybody, this is just what I see,” she said. “I didn’t really see it as ‘I’m going to be a female voice,’ it was just funny to me, and then people kind of pointed out ‘oh yeah, that is a female point of view.’”

Female voice aside, there is something Andrea is definitely trying to draw attention to: animal shelters and their need for help. Eagle-eyed fans may notice two recurring characters in her comics: her cats Alex and Danny. Andrea adopted them both from animal shelters in South Korea when she was stationed there, and she encourages visitors of her page to donate to their local animal shelter. In particular, Andrea put a link on her Instagram page to For Belle’s Sake Rescue and Rehabilitation, a North Dakota animal shelter run by an active-duty military couple.

“I always grew up with pets and tried to volunteer at animal shelters, but in some places where you’re deployed, like Korea, it’s hard to volunteer because you don’t speak the language,” she said.

Andrea was about to volunteer at a local Minot shelter before the COVID-19 pandemic hit. But now that she has the burgeoning Dream Doodles platform, she figured she’d use her newfound powers for good.

“I’ve got attention, so why don’t I help steer people towards donating for animals?” she asked.

For now, Andrea said she does not have any long-term goals for the Dream Doodles project, besides just to keep doing it every week. Some fans have urged her to put together a book of doodles, but that’s still in the ‘what-if’ stage for now. Until then, all we can hope for is another colorful, hilarious comic at the end of the week. One could say Dream Doodles is on its way to having oodles of fans all around the military.

“Keep up the good work Dream Doodles,” said one of them on Reddit. “Every time I read one of your comics I always smile.”

Related: These stick figure comics will change how you see the Coast Guard