Tucker Carlson equates the metric system with ‘tyranny,’ so someone should probably tell the US military

Can the United States of America continue to stand alone against the looming threat of... the metric system? 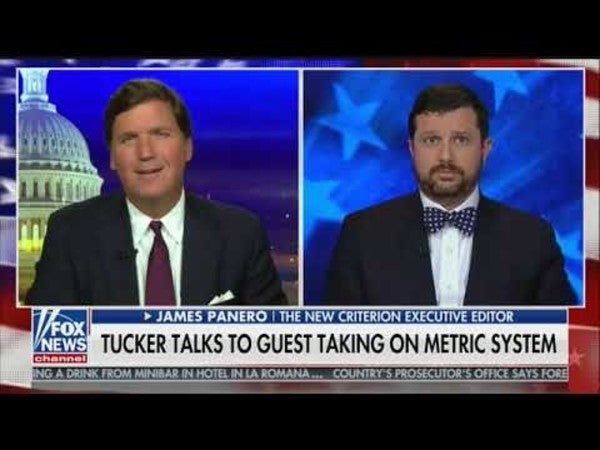 Can the United States of America continue to stand alone against the looming threat of… the metric system?

That was the thrust of a June 5 segment by Fox News host Tucker Carlson, in which he spoke with The New Criterion’s James Panero about the dangers posed by the metric system.

A self-described “anti-metrite,” Panero argues that the United States should hold its ground and not cave to “progressive” pressure to supplant our system of measurement with one used by just about every other country on the planet.

Or, as Carlson says, “almost every nation on Earth has fallen under the yoke of tyranny — the metric system — from Beijing to Buenos Aires from Lusaka to London, the people of the world have been forced to measure their environment in millimeters and kigh-low-grams,” Carlson said. “The United States is the only major country that has resisted, but we have no reason to be ashamed for using feet and pounds.”

It seems worth noting that one of America’s safeguards against the forces of tyranny — the United States military — conducts just about all of its business in, you guessed it, the metric system. Sure, there’s the occasional mention on a range that a shooter should think of distances in terms of football fields, but day-to-day operations, in training and in combat, are measured in meters and yes, even the dreaded “kigh-low-meter,” as Carlson would probably pronounce it.

Yikes, we certainly can’t use that system, despite the fact that it’s a crap-ton easier to measure out distances using basic multiplication.

But Carlson and Panero insist that liberty must be preserved, even if that comes at the heavy price of having to pull out a calculator any time you need to talk distance or weight with someone not from the three countries that don’t use the metric system. Except for the United States, Liberia, and Myanmar, every other nation has come to the conclusion that inches, feet, yards, miles, and pounds are all needlessly complicated.

That’s the same conclusion that the U.S. military came to as far back as World War I, when it in realized in 1918 that it needed to work cooperatively with other forces around the globe, and trying to convert miles to kilometers in the middle of a battle was probably something commanders could do without, according to a 1971 report by the Department of Commerce:

“The metric system has been adopted for use in France for all firing data for artillery and machine guns, in the preparation of operation orders, and in map construction,” reads the report. “Artillery and machine gun material intended for service abroad is being graduated accordingly. Instruction in the metric system will be given to all concerned.”

WATCH NEXT: Belgium Is Our Top NATO Ally