'To me, the most indefensible component of everything that occurred was just the delay in getting the interpreters out because that is something that was within our control.' 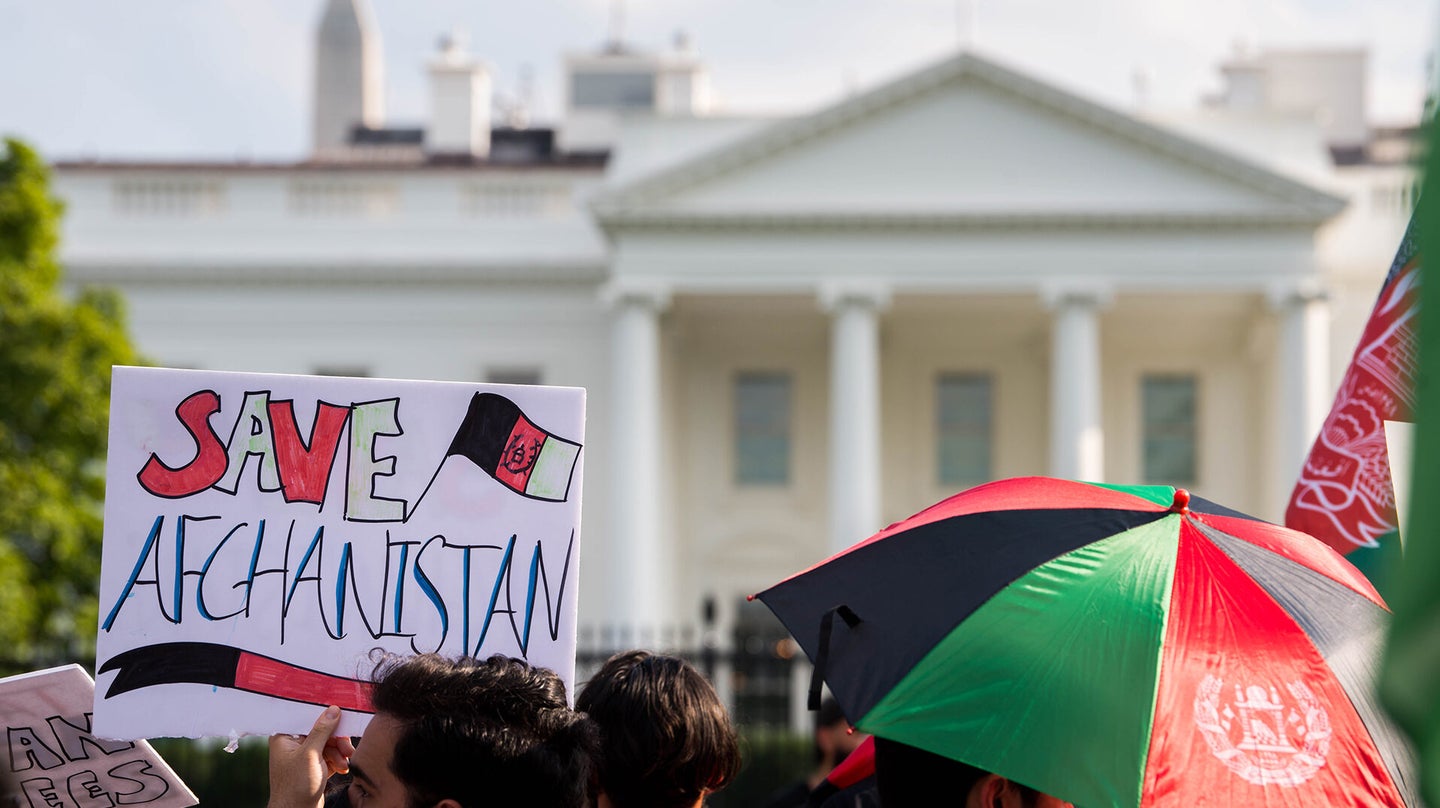 A "Save Afghanistan" sign is seen in front of the White House during a "Save Afghan Lives" protest on Aug. 28, 2021 in Washington, DC. The protest comes on the heels of a deadly bombing in Kabul this week as the U.S. and its allies rush to evacuate people from Afghanistan before the August 31st withdrawal deadline. (Photo by Liz Lynch/Getty Images).
SHARE

The world has been transfixed by the scenes of horror in Kabul since the city fell to the Taliban as legions of Americans and Afghans have struggled to escape the country, but President Joe Biden is arguing that the evacuation would still have been chaotic if it had started much earlier.

Hundreds of American citizens and many more Afghans at risk from the Taliban were left behind after the last U.S. military aircraft took off from Kabul on Tuesday. Many of those trying to get out were unable to get past Taliban checkpoints outside Hamid Karzai International Airport or through the airport’s gates.

Facing the strongest criticism of his administration over the tumultuous end to America’s longest war, Biden gave a forceful – and almost angry – speech on Tuesday defending his decision to pull all U.S. troops out of Afghanistan and end the evacuation on Aug. 31, as scheduled.

“Now, some say we should have started mass evacuations sooner and ‘Couldn’t this have be done – have been done in a more orderly manner?’” Biden said from the White House. “I respectfully disagree.”

“Imagine if we had begun evacuations in June or July, bringing in thousands of American troops and evacuating more than 120,000 people in the middle of a civil war,” Biden continued. “There still would have been a rush to the airport, a breakdown in confidence and control of the government, and it still would have been a very difficult and dangerous mission.”

“The bottom line is: There is no evacuation from the end of a war that you can run without the kinds of complexities, challenges, and threats we faced,” he said. “None.”

Biden announced in April that all U.S. troops would leave Afghanistan. The U.S. government’s efforts to begin evacuating Afghans who had worked with Americans did not begin until late July. Only 1,200 Afghans had reached Fort Lee, Virginia, by July 30.

With Afghanistan quickly slipping away, Biden announced on Aug. 14 that he had authorized 5,000 troops to deploy to Kabul as part of what would become the largest non-combatant evacuation in the U.S. military’s history. The Taliban walked into Kabul the next day.

The notion that the Afghanistan evacuation was going to be chaotic no matter when it began is hard to believe for Rep. Peter Meijer (R-Mich.). An Army veteran who made a surprise visit to Kabul on Aug. 24, Meijer called Biden’s comments “a key example of revisionist thinking.”

“To me, the most indefensible component of everything that occurred was just the delay in getting the interpreters out because that is something that was within our control,” Meijer said.

Meijer said he and other lawmakers have been warning the White House and State Department since April that they needed to clear the backlog of tens of thousands of Afghans who had applied for Special Immigrant Visas. In the months leading up to the Taliban takeover of Afghanistan, veterans, advocates, and lawmakers sounded the alarm over the leaving behind Afghans who’d partnered with the U.S.-led Coalition during the war. Many of those concerns had been raised before, and in some cases, years prior.

Even if the U.S. government had begun a modest evacuation in April of 500 Afghans per day, it would have potentially allowed up to 45,000 visa applicants and their families to have escaped Afghanistan by the end of July.

“That would have significantly cut down on the amount of people who had to wade through the throngs and the crowds,” Meijer said. “Five hundred a day is not a number that would diminish confidence in the Afghan government and it would have said that the U.S. is keeping its promises here for those who were waiting on their flights or waiting on final permissions.”

Meijer also argues that Afghans would not have mobbed Hamid Karzai International Airport if the evacuation had begun earlier because civilian airlines were still flying out of the airport until the city fell to the Taliban on Aug. 15.

Criticism of Biden’s handling of the evacuation has been bipartisan. Rep. Seth Moulton (D-Mass.), who traveled with Meijer to Kabul, described the president’s argument that the evacuation would have been just as chaotic if it had begun earlier as “absurd.”

“The reason that things were so chaotic at the airport is because the Taliban had taken over the country,” said Moulton, a Marine veteran who deployed to Iraq four times. “Regardless of when you thought the Taliban would take over, based on various intelligence estimates, if you started evacuating people before they took over, it would be orderly – just as it has been for the past two decades.”

By the time Moulton and Meijer arrived at Hamid Karzai International Airport, there was simply no way that the military could extend the evacuation beyond Aug. 31 because the Biden administration was locked into a “date-based timeline instead of a conditions-based timeline,” Moulton said.

If the evacuation had started earlier, Moulton argued, the United States could have also used multiple airfields, such as Bagram, which was turned over to the Afghans in early July.

He also noted that most of the Afghans who had worked for the U.S. military in the past were no longer performing mission-critical tasks because most U.S. troops had left the country, so they could have been evacuated sooner without disrupting current operations.

“If we had done all of these things, it would not have put those Marines, sailors, soldiers, and airmen in the position they were in at Kabul airport, where 13 of them died,” Moulton said.

Rep. Mike Waltz (R-Fla.), a Green Beret and colonel in the Army National Guard, lambasted Biden for going forward with the troop withdrawal before evacuating Americans and Afghans.

“The minute the White House pulled military transport and closed bases, Afghan allies and Americans around the country were stranded and subject to dangerous journeys to Kabul through Taliban checkpoints,” said Waltz, whose office Task & Purpose contacted to get an Afghan interpreter on the evacuation list.

“Yes, the embassy sent notices to American citizens recommending evacuation, but in the same breath multiple officials painted a rosy picture of the security situation,” he continued. “The notices also told Americans the embassy could not provide for their safety. While I opposed a full withdrawal, the execution of this withdrawal was a disgrace and has harmed our national pedigree around the world.”

Despite multiple warnings, neither the White House nor the State Department understood the scale and complexity of what the Afghanistan evacuation would entail, said James Miervaldis, chairman of the board for the non-profit group No One Left Behind.

Congress and the State Department have known about problems plaguing the Special Immigrant Visa application process for more than a year, Miervaldis said.

“At the same time all of this was happening, two billionaires flew to space and came back in one piece,” Miervaldis said. “We also flew a rover to Mars in seven months. So, something’s fundamentally very, very broken with our government and our competency versus what is happening in the private sector.”

One of the lawmakers who has been working to accelerate the visa application process for Afghans has been Rep. Jason Crow (D-Colo.), a former Army Ranger who has deployed to both Afghanistan and Iraq.

Crow, who supports Biden’s decision to withdraw U.S. troops from Afghanistan, has been calling for an evacuation of Americans and Afghan allies since April.

“Together with the bipartisan Honoring Our Promises working group, I remain committed to evacuating those still on the ground,” Crow said, “While I advocated for an extension of the evacuation deadline, I am deeply proud of our service men and women who completed a complex mission in Kabul under extremely difficult circumstances.”

For Army veteran Alex Plitsas, the main issue that caused the evacuation to be so chaotic was not so much when it began, but how it was conducted.

The evacuation of Afghans facing retribution from the Taliban should have coincided with the withdrawal of U.S. troops from bases throughout Afghanistan, said Plitsas, who is one of many veterans who have helped American citizens and Afghans get out of Kabul. That way, U.S. troops could have ferried Afghans to sites where they could have left the country.

“While there still would have been a rush at the airport, the number of people who we would have been responsible to evacuate – as far as I’m concerned, a moral responsibility – would have been significantly less,” Plitsas said. “And now, there’s tens of thousands of those vulnerable Afghans and hundreds of American citizens, who are left behind.”

UPDATE: This story was updated on Sept. 1 to include comments from Rep. Seth Moulton (D-Mass.) and Rep. Jason Crow (D-Colo.).