As a sea of humanity fights to escape the Taliban, an Afghan interpreter and his family make it to safety 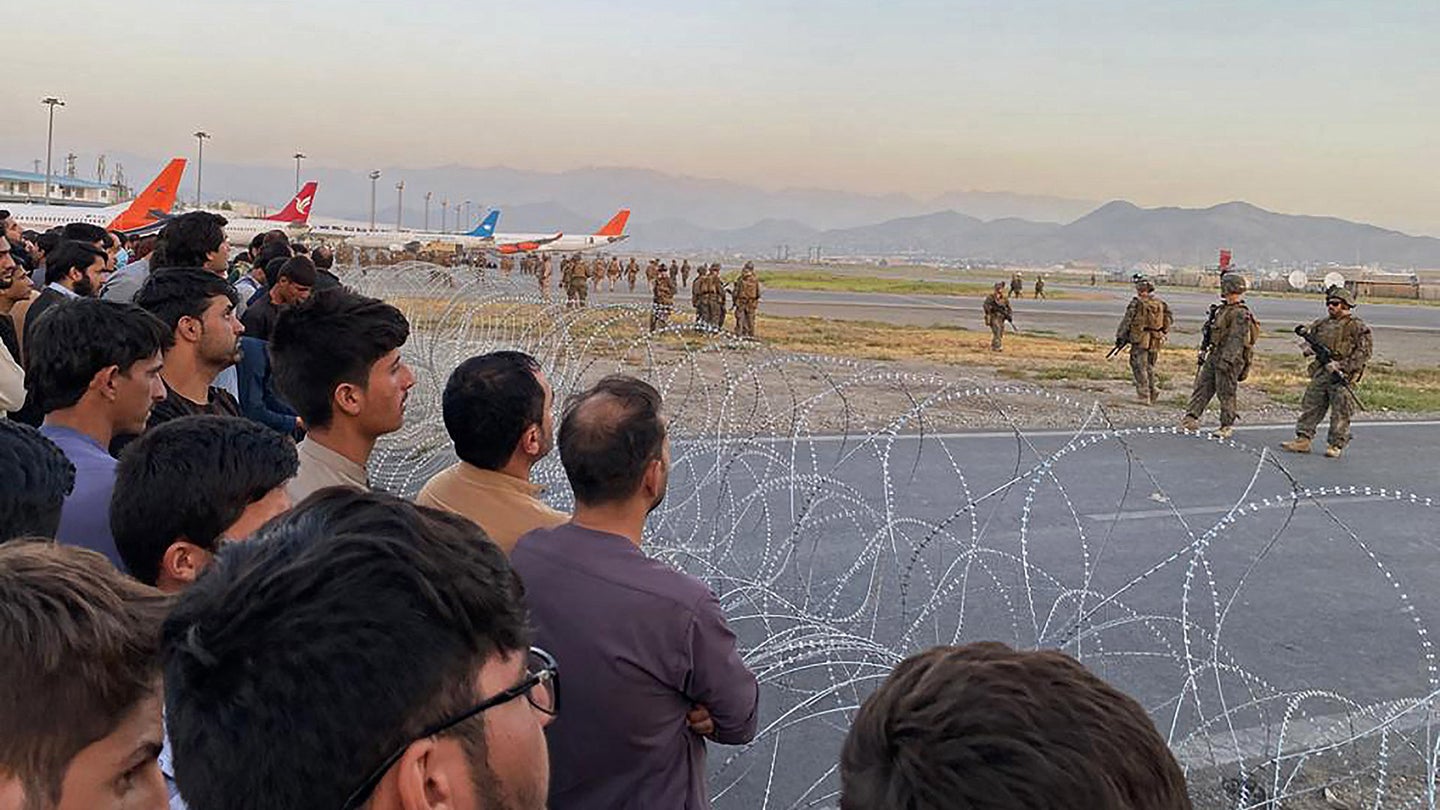 FILE PHOTO: Afghans crowd at the airport as US soldiers stand guard in Kabul on August 16, 2021. (Photo by Shakib Rahmani / AFP) (Photo by SHAKIB RAHMANI/AFP via Getty Images).
SHARE

After a weeks-long odyssey that included surviving a Molotov cocktail attack, losing his wife and children’s passports as they fled Kandahar, avoiding the Taliban after they captured Kabul, and initially being unable to get into Hamid Karzai International Airport, former Afghan interpreter Sher Ahmad Ahmadzai and his family finally reached safety on Friday.

The myriad of challenges that Ahmadzai and his wife and children faced before they arrived at Kabul’s airport is too numerous to list here. His application for a Special Immigrant Visa had long been held up because he needed a letter of recommendation from a company that no longer exists.

But the worst of times can bring out the best in humanity. Non-profit groups, attorneys, veterans, and other advocates for Afghans in need of rescue are stepping forward to pull off what has been dubbed a “Digital Dunkirk.” For full disclosure’s sake, I am obliged to mention that I have been working with Ahmadzai for roughly a month, but this story is not about me.

This column is dedicated to people like James Smart, Ahmadzai’s former supervisor, who spent more than a week crafting a new letter of recommendation that met all the State Department’s requirements; and Kelsey Haberly, executive assistant and legislative correspondent for Rep. Mike Waltz (R-Fla.).

When Ahmadzai received an email on Wednesday saying he needed a letter from his company’s human relations department in order for his visa application to be approved, Haberly managed to get him and his family on the evacuation list.

Haberly has been working 20 hours a day and “working the phones like a champ,” said Waltz’s spokesman James Hewitt.

“Kelsey and Rep. Waltz’s staff have been diligently working to get individuals processed,” Hewitt said.

The need to save our Afghan allies from the Taliban’s wrath is one of the last bipartisan issues in Washington, D.C., as evidenced by the fact that lawmakers from both parties are providing the State Department with the names of Afghans who need to be rescued.

The office of Rep. Seth Moulton (D-Mass.) has already compiled a list of more than 500 Afghans who need to get out, said Moulton’s spokesman Tim Biba, who added that people can email afghanevac.moulton@mail.house.gov to submit more names of Afghans who need to be evacuated.

Neesha Suarez, director of constituent services at Moulton’s office, has been a fountain of focused energy each time I have relayed distress calls from Afghanistan to her.

There are countless other heroes who are working around the clock to make the State Department aware of Afghans who are in danger and trying to escape the Taliban. One of them is Jill Marie Bussey, director of public policy for Lutheran Immigration and Refugee Service.

For the past week, I have sent her dozens of emails about Afghans begging for help. Some of them have been in the format she needs. Others have not. But she has consistently and diligently relayed these Afghans’ personal information to the State Department, regardless of the hour.

While she gave me permission to mention her in this column, she also stressed that she is just one member of a coalition of groups that are scrambling to help Afghan visa applicants and refugees escape before it is too late.

The main challenge now is no longer securing permission for Afghans to leave the country. Having airplanes to get people out is not an issue, but getting to them is. The Taliban have established roadblocks outside the airport and they seem intent on allowing as few Afghans to leave the country as possible. Even the lucky ones who make it past the Taliban still have to find a gate to the airport that is open, and that largely depends on luck.

Videos of the crush of humanity outside Kabul’s airport show that the catastrophe unfolding in Afghanistan’s capital easily equals or even surpasses the horrific scenes outside the U.S. embassy in Saigon during the April 1975 evacuation.

Indeed, Ahmadzai couldn’t get to the airport’s east gate on Thursday, so he leveraged a contact he has in the now-defunct Afghan military to gain passage to Hamid Karzai International Airport. (He was so elated afterward that he sent me a voicemail suggesting that I write a story about how the Marines there are helping Afghans.)

The situation is so dire that the administration’s claims that the Taliban are granting safe passage to American citizens are becoming increasingly laughable. While President Joe Biden insisted on Friday that the Taliban are allowing Americans into Kabul’s airport, David Marshall Fox told The New York Post that he and his 3-year-old son got within 10 feet of Marines at the airport yet were still unable to get through.

After Biden spoke, Pentagon spokesman John Kirby noted “there have been sporadic reports of some Americans not being able to get through checkpoints,” but he claimed most Americans have been able to make it to Hamid Karzai International Airport.

Kirby also had no information about an incident in which U.S. troops at the airport ventured outside of the wire to collect a group of American citizens. Biden had said earlier that 169 Americans had been brought “over the wall,” but he declined to provide any details.

“It wasn’t a rescue so much as assisting them getting onto the field,” Kirby told reporters at a Pentagon news conference.

Ahmadzai’s safe arrival at Kabul’s airport is truly wonderful news, but it does not negate the fact that his story seems to be the exception rather than the rule.

At this point, I’ve simply lost count of the Afghans who are sending me messages about how they or their families are in grave danger.  Every few minutes, my phone rings with a new SOS. My hand shakes each time I pick up the phone to read the latest plea for help.