Mattis Was The Target Of A Brazen Rocket Attack On Kabul Airport, Taliban Claims

A barrage of rockets that struck the international airport in Kabul, Afghanistan, on Sept. 27 were intended for U.S. Defense... 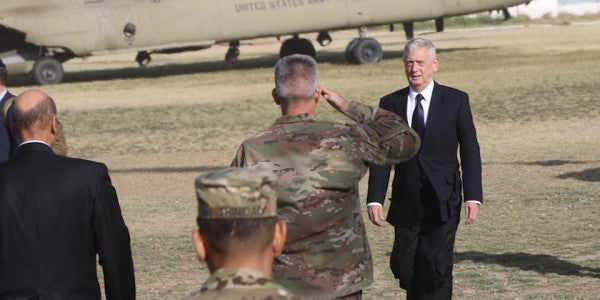 A barrage of rockets that struck the international airport in Kabul, Afghanistan, on Sept. 27 were intended for U.S. Defense Secretary Jim Mattis, according to the Taliban, which claimed responsibility for the attack via Twitter.

A U.S. military official told CNN that up to 40 rounds of munitions, including 29 rocket-propelled grenades, hit Hamid Karzai International Airport hours after Mattis landed for an unannounced visit. No injuries have been reported; however, an American weapons depot was apparently hit, causing secondary explosions.

NATO Secretary General Jens Stoltenberg is currently visiting Afghanistan together with the US Secretary of Defense, James Mattis.DoD photo by Lt.Cmdr. Kathryn Gray

Mattis was meeting with the Afghan president, Ashraf Ghani, and Jens Stoltenberg, the secretary general of NATO, at the presidential palace when the attack occurred. They were also joined by Gen. John Nicholson, commander of U.S. forces in Afghanistan.

“There has been an attack, our special forces are dealing with it,” Ghani said during a news conference on Wednesday. “This attacking civilian targets is a sign of weakness, not strength.”

The deputy commander of the Kabul police told The New York Times that Afghan forces had been dispatched to the area where the rockets were fired, while airport officials claimed that several insurgents had been spotted entering a house behind the airport.

As The New York Times notes, the occasion marks the first high-profile visit to the palace since President Donald Trump unveiled his new strategy for the 16-year-old war in Afghanistan.

In August, Trump said before a gathering of American troops at Fort Myer, Virginia, that he had originally intended to pull out of Afghanistan, but ultimately concluded that “a hasty withdrawal would create a vacuum for terrorists, including ISIS and al-Qaeda,” and also dishonor the more than 2,200 U.S. troops who have died fighting in the country.

The 2001 invasion of Afghanistan was predicated on the belief that Afghanistan had become a safe haven for terrorists — namely al-Qaeda, which orchestrated the Sept. 11 attacks.

However, under presidents George W. Bush and Barack Obama, U.S. military efforts in Afghanistan became increasingly focused on fighting the Taliban, which has seized huge swaths of territory since the NATO combat mission formally ended there in late 2014. Meanwhile, ISIS has established a foothold in the country’s east.

Trump said in August that his Afghan War strategy is different from his predecessors’ in that it will focus on “killing terrorists” rather than “nation-building,” as well as increasing pressure on neighboring Pakistan to dislodge terrorist cells on its side of the border. “In the end, we will win,” Trump declared.

NATO Secretary General Jens Stoltenberg is currently visiting Afghanistan together with the US Secretary of Defense, James Mattis.DoD photo by Lt.Cmdr. Kathryn Gray

There are approximately 11,000 U.S. service members in Afghanistan, most of whom are tasked with training and advising local forces, while a small contingent of special operations troops are conducting counterterrorism operations against ISIS in the east.

That insurgents were able to strike the Kabul airport — one of the most heavily fortified areas of the nation’s capital — with dozens of rockets indicates that the war in Afghanistan is far from over. If anything, the Taliban seems to be only gaining strength.

According to CNN, Mattis had not been fully briefed on the attack before speaking at Wednesday’s press conference. “An attack on an international airport, anywhere in the world, is a criminal act by terrorists,” he said. “It is a classic example of what the Taliban are up to right now.”

Mattis added: “If, in fact, this is what they have done, they will find the Afghan Security Forces continuing on the offensive against them in every district of the country right now.”