One of the best online Twitter trolls isn't a Russian posing as an American political junkie or your crazy uncle with... 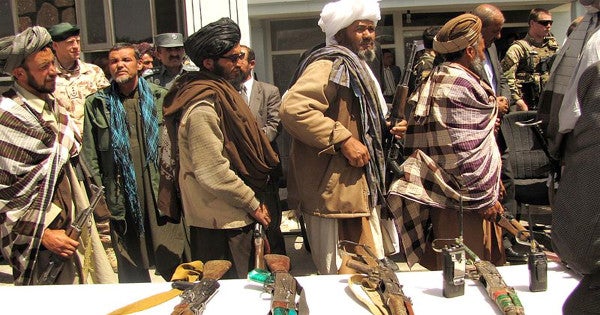 One of the best online Twitter trolls isn't a Russian posing as an American political junkie or your crazy uncle with the default egg profile photo. It's a middle-aged dude with a beard and turban whose goal is to retake Afghanistan and implement Sharia law.

Yes, it turns out that the Taliban, the former Afghan government party-turned-insurgent group, is pretty good at trolling the United States.

From its @Alvizier Twitter account, the group tweeted at NATO Secretary General Jens Stoltenberg on Thursday, in response to a recent speech he gave where he called on the Taliban to come to the negotiating table. As the kids would say, Taliban be like, cool story bro.

“No! It's you who must call for a meeting with our team in Doha to negotiate a NATO exit from Afghanistan,” the group tweeted back, even including a freakin' thumbs up emoji and their own hashtag.

What a time to be alive.

But every once in a while, the group addresses U.S. officials directly on Twitter, which I have to admit is kind of hilarious when you think about it. The U.S. and Afghan militaries are fighting a war in the air and on the ground in Afghanistan right now, and the Taliban is simultaneously conducting an online flame war in some ways better than a 12-year-old talking shit to you post-headshot in Call of Duty.

Take, for instance, a tweet in March from the U.S. Institute of Peace, a Congressionally-funded group based in Washington, D.C., in which it quoted American diplomat Alice Wells asking the Taliban, “how will you join this … new Afghanistan, and what positive role are you willing to play to secure its future?”

In the past this kind of question would be just a hypothetical, not warranting any response at all. Wells isn't going to send over a letter to the Taliban. She's just giving a speech for her small audience, and perhaps, some other people in the media and Americans may see it since they follow her social media profiles.

But now we're all connected, and the Taliban can literally respond in real-time. So they did. “This is not the correct way to start our mutual talks!” the group tweeted. “You can meet our team in Doha & directly pose this question+your other 100 questions. We promise to give you answers. Don't be afraid! Our team in Doha will not bite!”

And of course, they used a thumbs up emoji and the Taliban hashtag at the end.

The U.S. tried its own hand at trolling its enemies in the past, with its Twitter account “Think Again, Turn Away,” — which highlighted the hypocrisy of terror leaders and occasionally shared comically-bad videos.

But I think it's time to give it another try in this new age, in which the U.S. is currently getting pwned, if you will, online by everyone from the Taliban to Russian bots — which can certainly inspire some negative offline effects.

Call it whatever you want, but this is textbook information operations, and we need to go beyond dropping leaflets and playing Metallica over the megaphones. Moscow has certainly realized its power, so why haven't we?

Because someone really needs to defend Lt. Gen. H.R. McMaster's honor, and leave his mother out of this.