Afghanistan's government wants the U.S. to redeploy the A-10 Thunderbolt II to bolster efforts to fight the Taliban, according to a... 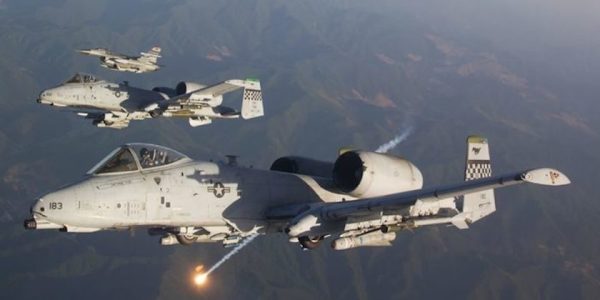 Afghanistan's government wants the U.S. to redeploy the A-10 Thunderbolt II to bolster efforts to fight the Taliban, according to a Military Times report.

A senior Afghan defense official said that country's government wants the vaunted A-10, which is highly regarded for its durability and lethality in close-air-support operations, to return to Afghanistan.

No decision on A-10 deployments has been made, according to Air Force Brig. Gen. Lance Bunch, who directs US air operations in Afghanistan. “The discussions of what forces we move to Afghanistan or drawdown from Iraq and Syria are all ongoing,” Bunch said.

After the liberation of Mosul in Iraq and Raqqa in Syria in July and October, respectively, operations against ISIS in those two countries, in which the A-10 played a major role, have begun to wind down.

The Air Force has deployed six more F-16 fighter aircraft — bringing the total to 18 F-16s — and a KC-135 tanker aircraft to Afghanistan in recent months. And the air war in the country has already intensified. (Though the Pentagon has begun classifying previously available data about military operations in Afghanistan.)

Related: The A-10 Gets A Boost From Air Force Secretary Heather Wilson »

The numbers of weapons released by U.S. combat aircraft in Afghanistan have hit highs not seen since the 2010 surge. Air Forces Central Command data released in October showed 751 weapons dropped in September, eclipsing the 503 released in August and setting a new five-year high. (Data released in November adjusted September's total down to 414 and recorded a new high — 653 — in October.)

U.S. forces in Afghanistan have also turned their attention to the Taliban's involvement in the drug trade in an effort to cut into the insurgent group's financing. Advanced F-22 fighters, joined by B-52 bombers and Afghan A-29 Tucano propeller aircraft, attacked drug labs in November.

Since then, about 25 Taliban drug labs in northern Helmand province — a hotbed for Afghan drug production — have been destroyed, costing the Taliban almost $16 million in revenue, according to Bunch, who said the air campaign against Taliban financing had only “just begun.”

Joint terminal attack controllers wave at an A-10 Thunderbolt II attack aircraft during a show of force on the Nevada Test and Training Range July 19, 2017.Jared Keller

In 2017, the area under opium cultivation in Afghanistan increased 63% over the previous year, according to UN data. Even though eradication increased 111% during that period, the number of opium-poppy-free provinces declined from 13 to 10.

The Taliban has gotten heavily involved in the drug trade. The insurgent group has also expanded its territorial control in Afghanistan — from 11% of the country's 407 districts in February to 13% in August.

Trump's new strategy will also deploy more U.S. troops to Afghanistan — some of whom will embed with Afghan forces closer to the fighting. That could put them in harm's way and will likely lead to more U.S. aircraft providing close air support, at which the A-10 excels.

The Air Force backed away from plans to begin mothballing its A-10 fleet earlier this year. The Air Force has pushed Congress for additional funding to produce new wings for 110 of its 283 Thunderbolts, and Air Force Secretary Heather Wilson assured lawmakers this month that money allotted for that project would keep the A-10 dominant.

“I happen to be a fan of the A-10,” Wilson told members of the Senate Armed Services Committee on Dec. 7.