This is not a “best of" list, but rather a compilation of five films and a miniseries that each highlight a different facet of the War on Terror and together paint a pretty comprehensive picture of it. 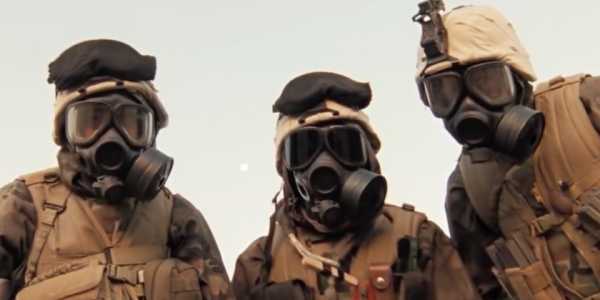 I am not a film critic. I’m just a guy with a Netflix account and a lot of opinions. I also haven’t seen every film and television show about the wars in Iraq and Afghanistan from start to finish. For example, I only made it about a quarter of the way into Robert Redford’s tedious 2007 Iraq War drama Lions for Lambs before I decided to count my own farts instead. And while I did somehow manage to make it all the way through the first episode of Fox’s short-lived Enlisted, I had already erased every second of it from my memory by the time the credits started rolling.

This is not a “best of” list, but rather a compilation of five films and a miniseries that each highlight a different major facet of the War on Terror and together paint a pretty comprehensive picture of the war as it makes sense to me. I typically don’t enjoy films that glorify combat, which can probably be attributed to my own inglorious adventures as a soldier overseas. I’d venture to guess this list does not reflect the film taste of veterans in general. (I think the best films about America’s military campaigns in Iraq and Afghanistan are documentaries, anyway. But that’s another article.) Here it is:

Afghanistan was something of a mechanical bull for the International Security Assistance Force commanders who rotated through the country before the NATO combat mission there officially ended in 2014. None gave it a more earnest shot than U.S. Army Gen. Stanley McChrystal, who in late 2009 persuaded President Barack Obama to commit an additional 3o,000 troops to fight a resurgent Taliban. Months later, McChrystal was out of a job — forced to resign after an incendiary Rolling Stone article quoted him bad-mouthing the commander-in-chief.

That article, written by the late Michael Hastings, grew into The Operators, the nonfiction book War Machineis loosely based on. Brad Pitt plays Gen. Glenn McMahon, a caricature of McChrystal. The film’s dry comical tone didn’t play well with critics; many complained that satire is an ill-suited genre for a critique of America’s longest-running war. But I can’t think of a single dramatic film that can hold a candle to War Machine in this regard. Pitt’s McMahon certainly takes some getting used to — he’s borderline cyborg — and the film is probably a few scenes too long. Still, as a portrait of a glory-hungry four-star who is ultimately destroyed by his determination to “win” Afghanistan, it is a devastatingly precise depiction of the war.

Hollywood films about the War on Terror tend to keep the people of Iraq and Afghanistan in the periphery, typically portrayed as grieving mothers or clay pigeons. Americans are much more inclined to pay to see war films about themselves kicking a lot of non-American ass: Breitbart calls those movies“pro-American.”Lone Survivor, Zero Dark Thirty, Act of Valor, and American Sniper make the cut. On the other hand, films that might detract from President George W. Bush’s decision to“defend freedom” by launching simultaneous wars in two very different countries is treason, intended to “to benefit the terrorists and undermine a righteous war.”

Turtles Can Fly writer and director Bahman Ghobadi is no enemy of freedom. He fled his native Iran to escape an oppressive regime. But the Iraq he depicts in Turtles Can Fly isn’t teeming with bloodthirsty jihadists. Set near the Turkish border on the eve of the 2003 U.S. invasion, the film is a coming-of-age tale about Kurdish orphans. While the invasion is not the focus of Turtles Can Fly — American troops and aircraft only make a brief appearance toward the end — I’d argue it’s the most important Iraq War film on this list.

Imagine you’re a professional basketball player and Hollywood releases a movie that is unanimously lauded by critics as the most realistic film about the NBA ever made. You’re disappointed when you discover that, instead of playing basketball, the players in the film just run around the court punching each other, getting drunk, and leaving the arena without permission. Only one guy ever scores, and he makes nothing but slam dunks. Then the movie wins six Oscars and your brain explodes. That’s pretty much what it was like being in the Army when the Academy of Motion Picture Arts and Sciences declared Kathryn Bigelow’s The Hurt Locker the best film of 2009.

For those who spared themselves the agony, here’s the best synopsis I can muster: Jeremy Renner plays an Army explosive ordnance disposal tech who suffers from a dangerous addiction to defusing bombs — especially ones that could also be defused from a safe distance using, say, a robot or an explosive line charge. Does the much-celebrated scene of Renner going cuckoo for Cocoa Puffs in the cereal aisle of his local grocery store compensate for the other 130 minutes of him running around Iraq like a nihilistic Dennis the Menace? Not in my opinion. Still, The Hurt Locker deserves to be on this list, because it does convey one crucial reality about the War on Terror: the general public hasn’t really been paying attention.

Hollywood’s latest big-budget addition to the Iraq War genre is also its most earnest attempt to bring the war home. Directed by American Sniper screenwriter Jason Hall and based on David Finkel’s nonfiction book of the same name, Thank You for Your Service stars Miles Teller as an Army infantryman who returns to middle-of-nowhere Kansas after a hellish tour in Baghdad. Just about every trope that American filmmakers have come to rely almost exclusively upon to convey the war’s psychological impact on our troops — paranoia, rage, suicide, nightmares, flashbacks — makes an appearance in this film. It also follows a familiar blueprint: soldiers come home from war, kiss their wives and girlfriends hello, then dust off the old Ka-bar and start playing Rambo in the front yard.

But Hall did his homework. There are a few scenes in Thank You for Your Service that were too close for comfort. They felt almost intrusive. I realize that probably doesn’t sound appealing, and don’t get me wrong: “entertaining” is probably not a word anyone would use to describe this film. However, if you’re going to watch one movie to help you make sense of why your crazy Uncle Bill hasn’t left his house once without at least one pistol on his belt since he got home from Desert Storm, Thank You for Your Service should be it.

What really sets Generation Kill apart from shows that treat U.S. service members as either mindless gladiators or victims of psychological torture is that it dares to be funny. Like Stanley Kubrick, Simon and Burns understood that levity is the soul of grunt life. So-called “military humor” isn’t just dick jokes and YouTube videos of soldiers singing “Call Me Maybe.” Those are merely manifestations of something much deeper and more ubiquitous. The force recon Marines depicted in Generation Kill possess a swagger that is distinctly American and rooted in a sense of invincibility. It also points to another prevailing trait among the troops who’ve served in Iraq and Afghanistan over the past 17 years: a lack of faith in the mission.

Look, I’m not so up my own ass that I can’t enjoy a movie about Navy SEALs, even one that’s been panned for grossly exaggerating the real-life events it’s based on. Of the three films thatform the holy trident of post-9/11 SEAL films, Lone Survivor is, in my humble opinion, the best. American Sniper is too melodramatic and Zero Dark Thirty was directed by Kathryn Bigelow. Lone Survivor is pure, unadulterated combat with just enough gore and scenes of commandos tumbling down jagged cliffs like ragdolls to make civilian audiences understand that combat is not Call of Duty.

A lot of good men lost their lives in Operation Red Wings, and the fact that Marcus Luttrell — played by Mark Wahlberg in the film — managed to survive that horrific ordeal is testament to both his extraordinary willpower and the unparalleled caliber of America’s elite special operators. Movies rarely suffice as history lessons, and Lone Survivor is no exception. But the film serves as an important reminder that the War on Terror continues to be shouldered by a small group of people, asked to achieve the impossible for a cause that fewer and fewer of their countrymen believe in. And sometimes the pressure obliterates them.