A new trailer for the upcoming installment in America’s favorite human-flaying Predator franchise just dropped, and considering this R-rated action... 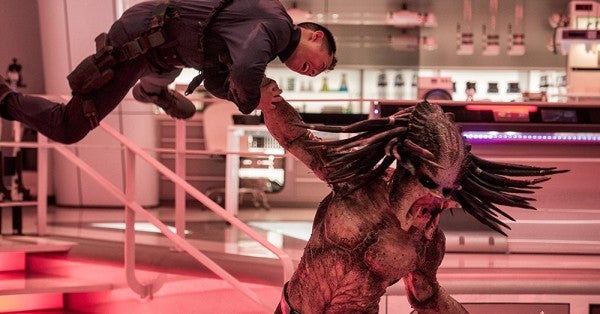 A new trailer for the upcoming installment in America’s favorite human-flaying Predator franchise just dropped, and considering this R-rated action flick starring a big ugly space hunter doesn’t hit the screens until Sept. 14, it felt premature to “review” anything.

Instead, the Task & Purpose staff decided to do what anyone with time on their hands would do: we speculated, went off on weird tangents, compared a fictional creature’s face to female genitalia too many times, and generally made trash jokes. Enjoy.

Here’s what we want from the reboot, and what we’re frankly sick of, but know we’re gonna get anyway.

Brad Howard, multimedia producer: The trailer gives away the entire plot. The U.S. government is aware of Predators. They have an elite team that knows how to hunt them. Great, that makes sense since in Predator 2, THE EXACT SAME THING HAPPENED. Ok, so unlike Predator 2, these spooks nab a Predator (and some PTSD). But they totally didn’t catch the unknown alien, currently dubbed a ‘Super Predator’ revealed to be the actual bad guy.

The Super Predator is possibly the least imaginative thing ever. In the godawful, but cheesy-fun, Alien Vs. Predator 2 the bad guy ended up being a Pred-Alien (which is a alien that popped out of a Predator, gaining it’s genetics or something), which looks awfully similar to this Super Predator. The Super Predator forces the regular Predator to team up with the bus of VA veterans and they set a bunch of traps in the clinic to kill the super predator. The tiny Predator sacrifices himself to kill the Super Predator with his wrist nuke, turning the VA into a crater in the process. Also everyone dies but the blonde vet who was getting examined in the trailer and the love interest of his, which will be a VA nurse that he saves (she saves him once with a witty one-liner though). Calling it now.

Also the “mom’s vagina” joke in the trailer was a tongue-in-cheek nod to the Predator's infamous mouth. I have a film degree; I know cinematic subtext when I see it.

Related: The New ‘Predator’ Will Have Violence, Jokes, And Vets On A Mission To ‘Kill These F*cking’ Aliens »

Jared Keller, senior editor: Brad is right about the recycled plot, and frankly, it’s not that surprising! But even though I’m really tired of the whole “gritty reboot” trend in Hollywood (even fucking Mary Poppins isn’t immune), I’m actually kind of xexcited for the blood-spattered darkness of The Predator. The last few appearances of our favorite vagina-mouthed space bounty hunter were bizarre and campy (although I did love to hate Topher Grace in 2010’s Predator), but the trailer for The Predator looks like a worthwhile successor to the franchise, a solid Batman Begins to the nipple-crazy action of Batman & Robin.

The one thing I’ll say is that I rolled my eyes the minute I heard the word “Rangers,” and not for any silly inter-SOF reason. Since I jointed Task & Purpose, I’ve noticed a lot of weird portrayals of military personnel in movies, from sloppy salutes to weird uniforms to a distinct lack of paperwork (case in point: I recently watched Transformers: The Last Knight which was basically just a commercial for the Osprey). I hope that Shane Black spent some time with the 75th Ranger Regiment and applied a level of realism to the film. And why wouldn’t he? Laser cannons and active camouflage aside, I’d still bet on a gaggle of U.S. special operators with no compunction whatsoever.

James Clark, veterans reporter: So, you know what I really would have liked — and am definitely not going to get from this? I wanted a gritty sci-fi horror film that's more like The Grey or A Quiet Place than an action blockbuster with bits of campy humor tossed in. It’d basically be the story of a big game hunt, told from the perspective of the prey:

You’ve got a group of childhood friends who meet for an annual hunting trip, but there’s something else in the woods — ooh, spooky. They’re picked off as they frantically race through the forest. By the end of it, only one of them is left alive, and as he nears a clearing, he comes across the alien hunter’s base camp. There he finds all that remains of his childhood friends: discarded heaps of meat; bones fashioned into trophies; and skins drying on tanning racks.

He drops to his knees, and you hear the clickety clack of the Predator’s mandibles as it uncloaks in front of him. Our lone survivor throws down his rifle. He’s a broken shell of a man, and he’s given up hope. The Predator let’s him live — there’s no sport in killing something that wants to die.

Related: I Have No Idea What’s Happening In The New Trailer For ‘The Predator’ And I’m Totally Fine With That »

Adam Linehan, senior staff writer: I never saw the original Predator, so all of this is new to me. I tend to gravitate toward historical period dramas — Downton Abbey,Elizabeth, Sophie’s Choice, etc. Scary space aliens just aren’t my bag. But this Predator reboot looks awesome. Shane Black did a truly remarkable job. He’s managed to earn my respect and I don’t even respect myself. My favorite part is the joke about the guy’s mom’s vagina being a video game — “it would be rated E for Everyone.” Classic! I look forward to more zingers like that when the movie premieres on Sept. 14. I’m buying two tickets in advance (one for me and one for my cat, Zester (see photo below)). 4/4 stars.

My only criticism: not enough blood. Hopefully they’ll up the the volume in post-production.

This is not a cat named Zester. Adam does not have a cat, Zester or otherwise. That was all sarcasm, because apparently we're announcing when we do that now.