I really thought I’d hate it. But folks, I just don’t. 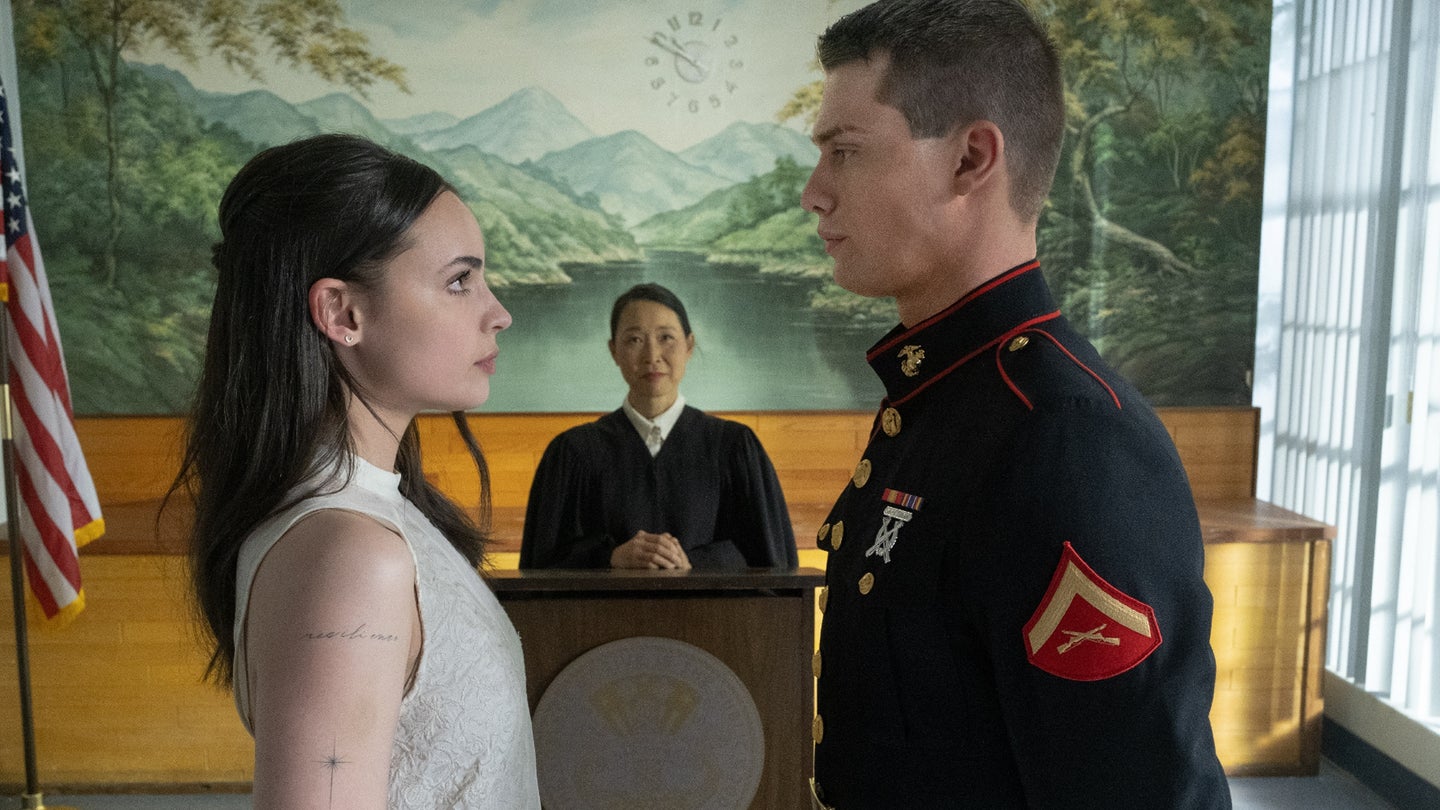 When I first saw the trailer for Netflix’s Purple Hearts, I, probably like many of you, rolled my eyes. A love story about a sham military marriage for benefits? Give me a break.

I almost wanted to hate on it, because it seemed like it would be too easy. But I’m here to report that after watching it myself, it’s good. As in, made-me-tear-up-by-the-end good.

The story centers around Lance Cpl. Luke Morrow, a recovering addict who joined the Marines to prove himself to his father, and Cassie Salazar, a struggling singer/songwriter with Type 1 diabetes. Morrow, played by Nicholas Galitzine, is preparing to deploy to Iraq but has a hefty debt with his former drug dealer to pay off. And Salazar, played by Sofia Carson, has run out of money to get the insulin she desperately needs to “literally survive,” she says exasperatedly as she and Morrow work out the details of their arrangement in a diner booth.

This article contains mild spoilers from Purple Hearts, which was released on Netflix on July 29.

Almost from the start, the two are at odds. She’s a feminist who has sworn off service members as she later reveals her mother had a “string of boyfriends from the base.” Moments after meeting her, Morrow confidently pegs her as “predictable,” and someone who tweets “a lot about other people’s rights” but doesn’t actually “want to do anything” because “guns are mean.” He’s a Republican, she’s a Democrat. She loves hot sauce on breakfast tacos, he hates it. She wants an iguana as a pet, he absolutely does not.

Within the first 10 minutes of the film, one of Salazar’s friends says a Marine joked with her that she should marry him for health care.

“Do you see the guy who looks like he’s 12 years old?” asks Nora, a fellow band member played by Kat Cunning who works at the bar with Salazar. “He told me that I should reconsider my stance on men because if I marry him I would get incredible health insurance.”

Purple Hearts, which was filmed at Camp Pendleton, is as clear an example of the classic enemies-to-lovers trope as you’ll find. And while the film has no shortage of stereotypes — sexist Marines, unruly lance corporals, stubborn feminists who have been burned one too many times — it’s heartfelt and genuinely enjoyable. Galitzine and Carson have undeniable on-screen chemistry, and while cheesy at times, the storyline is certainly enjoyable enough to keep you entertained.

Soon after meeting for the first time, the idea of marriage for benefits becomes more realistic as Salazar realizes she is completely out of options for getting her insulin. She first approaches a childhood friend, Frankie, played by Chosen Jacobs, about the idea of a sham marriage; the idea is gently rejected as Frankie says he’s getting serious with his girlfriend.

Enter Morrow. While he at first rebukes the idea when he overhears Salazar talking with Frankie — his bunkmate, go figure — because his father is a retired Marine MP, he later changes his tune, as his old drug dealer comes calling for the $15,000 Morrow owes him. Married troops get more money, he reasons. One thing leads to another, and soon Salazar and Morrow are getting married in a courthouse with Frankie as their only witness.

The night before Morrow and the rest of his unit ship out — the very day that the two supposed love-birds got hitched — they get into a fight in front of the other Marines and their significant others. As the fight escalates, however, Morrow remembers what they’re supposed to be pulling off. He pulls her close and they pretend to make up as his buddies watch and make jokes from inside a restaurant.

Later that evening, the two have to share a motel room. Tradition, Morrow tells her, for the Marines and their sweethearts to stay there the night before deployment. And wouldn’t you know it, there’s only one bed.

The entire story is a game of emotional tug-of-war. When they get close, something happens to push them apart. When it seems one is falling, the other appears distant. But while the trailer seems to paint Salazar as a “dependa,” a derogatory term typically used for female spouses of service members who do nothing while their service member puts in the hard work, it’s clear in the film that Morrow is just as dependent on her. Though they planned to divorce quickly after Morrow returns from Iraq, tragedy strikes, and Morrow is injured by an improvised explosive device (IED). Before they know it, the vows they took to care for one another “in sickness and in health” become more real than they’d ever imagined.

Given my previous movie hot takes, it’s probably not surprising that I’m as big of a sucker for a romantic drama as the next person. But as I started watching the movie with a critical eye for this article I quickly found myself totally engrossed, my Google doc of notes sitting practically empty as I watched the story play out.

Ultimately, Purple Hearts has something for everyone: A solidly entertaining storyline with great chemistry for my romance lovers, and an opportunity to poke fun at a military-related film for the folks who, well, were always going to poke fun at it anyway.