Air Force Security Forces vehicles are usually meant to help protect aircraft on the flight line, not get skewered by them. 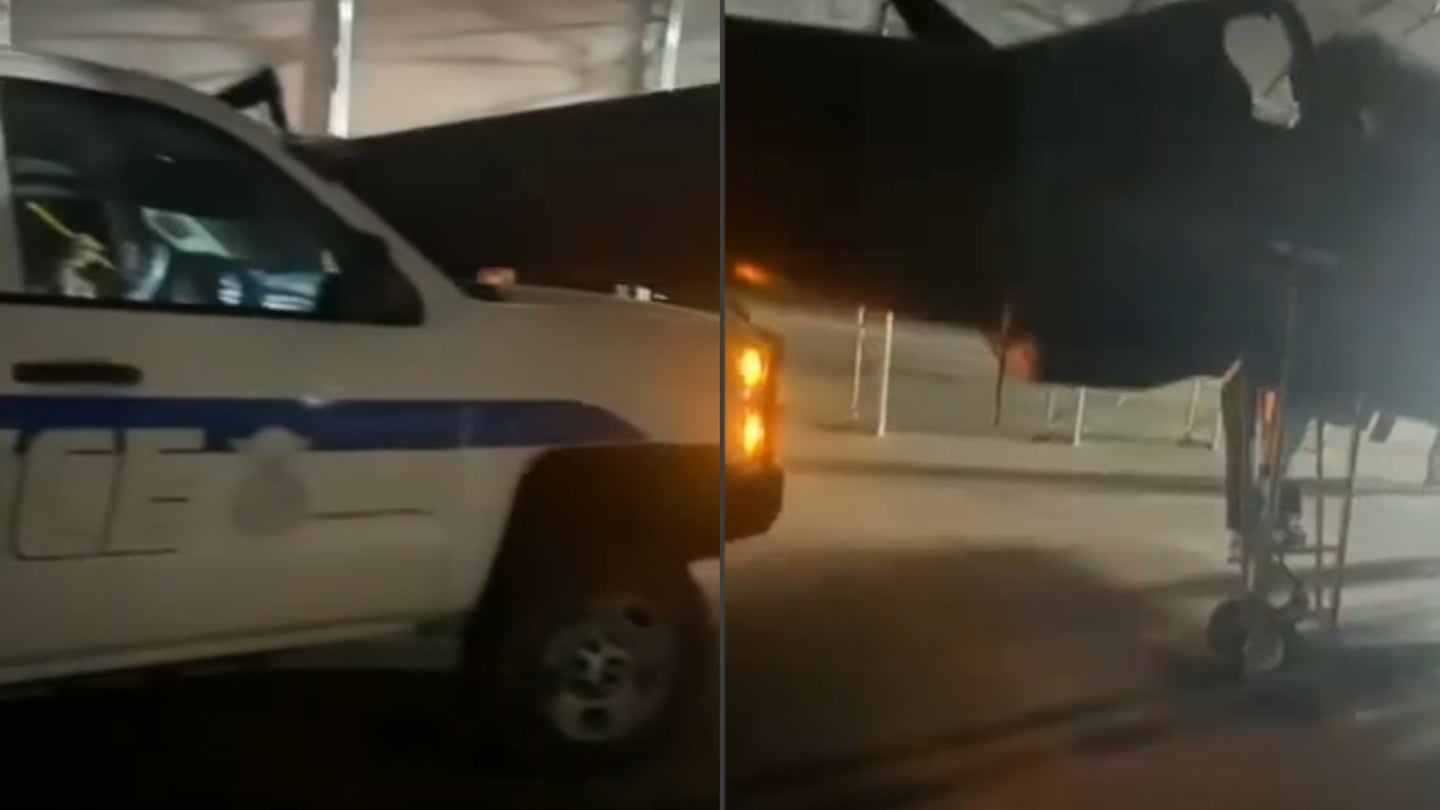 Batman vs. Superman, George Foreman vs. Muhammad Ali, Darth Vader vs. Obi-Wan Kenobi: some match-ups are so epic you just can’t miss them, and one of them unfolded accidentally early last Saturday at Holloman Air Force Base, New Mexico, where an Air Force truck collided with the nose of a Mirage F1 fighter jet. The Mirage appears to have won the fight, as its nose can be seen poking straight through the space where the truck’s windshield should be in a video posted to the popular Facebook page Air Force amn/nco/snco on Tuesday.

“In the morning hours of Saturday, July 23, 2022, a 49th Security Forces vehicle impacted a Mirage F1 during a routine training exercise at Holloman AFB, New Mexico,” said Denise Ottaviano, a spokesperson for the Holloman-based 49th Wing. “There were no injuries as a result of the accident. To protect the integrity of the ongoing investigation, additional details will not be provided.”

Security Forces are the Air Force equivalent of military police, and one of their most important jobs is to protect the flight line, the expensive aircraft on it, and the airmen who operate and maintain them. In fact, airmen who drive vehicles on the flight line have to acquire flight line driver’s licenses to do so. Security Forces airmen also establish “red lines,” around certain areas of the flight line that only certain employees and contractors can cross, and when an unqualified individual is caught “breaking red,” it is an automatic security violation. In such an instance, Security Forces airmen apprehend the intruder and read them their rights on-scene, according to an Air Force press release.

It’s not every day you see a jet’s nose poking through one of the vehicles driven by airmen charged with keeping security so tight. Still, it could have been worse. While Ottaviano could not disclose a damage estimate for the collision, nobody was injured and, judging from the video, neither the Mirage fighter jet nor the Security Forces truck appears heavily damaged. As usual, Facebook users commenting on the video delivered some of the most serious damage.

“I hate when aircraft appear out of nowhere,” wrote one commenter.

Comments aside, the video is also unusual because the Mirage F1 is not a U.S. Air Force fighter jet. The Cold War-era jet was once the standard air-to-air fighter for the French Air Force before the aircraft was replaced by the Mirage 2000, according to the Federation of American Scientists. The lightweight aircraft was very popular, being sold in at least 11 countries and being flown in a tactical reconnaissance role in the French Air Force as late as 2014, according to Flight Global. The jet continues to be flown today by private contractors such as the Airborne Tactical Advantage Company (ATAC), which in 2020 was awarded an Air Force contract to fly as the bad guys, also known as ‘red air’ against U.S. fighters training at Holloman and at Luke Air Force Base, Arizona, according to The War Zone.

At the time, ATAC said it had 10 Mirage F1s with Federal Aviation Administration certification, according to the War Zone. The company had previously mock-fought against U.S. Navy and Marine Corps fighter squadrons before winning the Air Force contract. ATAC is not the only company flying the Mirage against U.S. fighters: Draken International also flew the F1 at Nellis Air Force Base, Nevada up until June. The F1s may be old, but ATAC keeps them fighting against younger military jets by upgrading them with new avionics, radars and electronic warfare systems, The War Zone reported in 2019.

Hopefully none of those fancy electronics were damaged in the collision. If they were, well, there’s always the old understatement used by maintainers everywhere: “that’ll buff out!”