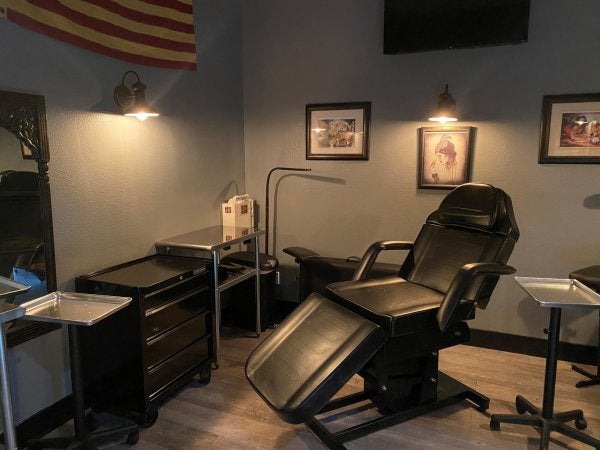 Airmen stationed at Nellis Air Force Base in Nevada no longer have to leave the base to get a back tattoo of Curtis Lemay flying atop a massive eagle with the word “airpower” in stencil font. Now, they can just head on over to the on-base tattoo parlor — and limit the time they have to rethink their decision.

Officials at Nellis recently unveiled the first tattoo studio to land on an Air Force or Army installation, according to the base’s official Facebook page, which is part of an effort to “improve the quality of life” of airmen. (The Navy did not immediately respond when asked whether there were any studios on Navy or Marine installations).

“We have been working on this for some time and are thrilled to be the tattoo studio chosen by [Army and Air Force Exchange Service] & the U.S. Military to open on one of the largest military bases in the world,” said owner Ryan Harrell in a statement on the studio’s website.

The Air Force doesn’t have size or area limitations for tattoos on the chest, back, arms, or legs, so we fully expect at least one motivated airman to get an F-35 inked across their entire chest.

The reaction on the Facebook page was mixed, with comments ranging from “I had to make sure this wasn’t Duffel Blog” to “I need to switch branches.” Though some found it as yet another reason to hate the Air Force: “Meanwhile Marines live in black mold barracks,” one man wrote. “Way to go DoD.” (He’s not wrong).

The studio, called “American Tattoo Society,” will be open seven days a week from 10:30 a.m. to 6 p.m., the base said. It officially opened on Sept. 4 in the main exchange across from the barbershop.

“The establishment of a tattoo parlor on Nellis AFB is tied directly to airmen morale,” said Lt. Col. Bryon McGarry, a Nellis spokesman. “People enjoy expressing themselves through tattoos and Nellis airmen are no different.”

And if that weren’t enough, Nellis is planning to open up a second shop called “Nellis Ink” which will bring in artists from the Las Vegas area that will tattoo at a “reduced price,” McGarry said.

So anyway, if you aren’t in the Air Force, this pretty much confirms you did indeed join the wrong service branch.

According to Harrell, there are plans to open other base tattoo locations over the next few years, including one at Fort Bragg, North Carolina.