Why Nellis Air Force Base held its first ever drag show

"The men are lovely on this Air Force base." 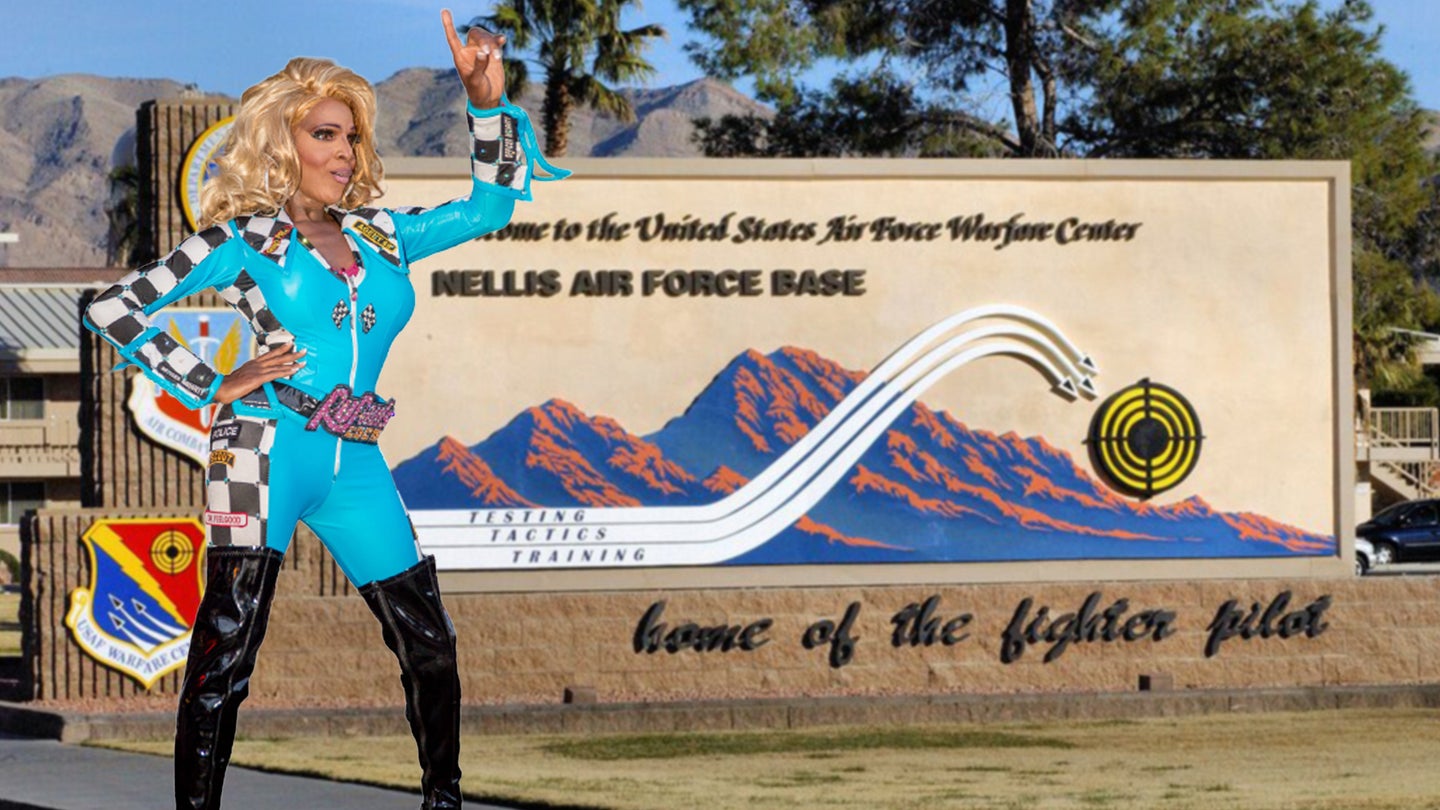 Nellis Air Force Base made history last week for hosting its first ever drag show, where guests from the local Las Vegas drag scene performed and took attendees through the history and significance of drag within the LGBT+ community.

The event was planned by the Nellis Air Force Base Pride committee, which is composed of volunteers from across the base focused on diversity and inclusion initiatives, said Nellis spokesman Lt. Col. Bryon McGarry. It was sponsored by the Nellis Top 3, a private group meant to “enhance the morale, esprit de corps, of all enlisted personnel assigned to the [99th Air Base] Wing and to facilitate cooperation between members of the top three enlisted grades,” according to the group’s Facebook page.

“Ensuring our ranks reflect and are inclusive of the American people is essential to the morale, cohesion, and readiness of the military,” McGarry said. “Nellis Air Force Base is committed to providing and championing an environment that is characterized by equal opportunity, diversity and inclusion.”

The event sent some ripples among social media commenters who saw the drag show as a fatal flaw in America’s national security program. The right-wing news site Breitbart covered the promotion of the event, kicking off anguish from commenters.

“Trinity [sic] and Tobago could probably take us over at this point,” said one commenter on Twitter, reacting to a flyer promoting the event, which was held on Thursday, June 17.

“On a global stage we are being laughed at,” said another.

The concerns echo similar voices who have raised doubts over the Navy’s inclusion of the book How To Be an Antiracist on its reading list and West Point teaching a seminar called “Understanding Whiteness and White Rage.” Gen. Mark Milley, the Chairman of the Joint Chiefs of Staff, addressed those doubters in a hearing at the House of Representatives on Wednesday.

“What is wrong with understanding — having some situational understanding about the country that we are here to defend?” Milley asked.

Rather than being a national security risk, drag is a broad term for “ostentatiously exaggerated” cross-dressing, “ironically playing up imitations of the opposite sex,” according to the Routledge International Encyclopedia of Queer Culture.

While the practice dates back to at least the Elizabethan era in England, it really took off in the 1920s with performers like Judy Garland and Marlene Dietrich, women who popularized male dress for women, according to the encyclopedia. Drag took on a political connotation after the Stonewall rebellion in New York City in 1969, which was led by cross-dressers and drag queens and is considered the start of the modern gay rights movement.

“Drag is essentially action, not identity,” the encyclopedia writes. “It shakes up all rigid definitions for gender and sexuality, parodying the stereotypes of femininity and masculinity.”

And while Thursday’s show was the first ever to be hosted by Nellis Air Force Base, drag is not new to the military. Just check out this photograph taken in Germany just 10 days after World War II ended in Europe, where about 60 soldiers put on a drag show all on their own.

“These are all GI’s. There aren’t any girls in the show,” wrote the original owner on the back of the photo.

More recently, Joshua Kelley, a yeoman 3rd class in the Navy, made a name for himself performing as Harpy Daniels in drag in front of excited crowds.

“I’ve been accepted everywhere I go,” he told Navy Times in 2018. “Those outside my command don’t know I’m the drag queen who slayed on the ship. To most sailors, I’m just YN2 Kelley. Once they find out I’m Harpy Daniels, I’m praised as an inspiration and see so much joy in their reactions for simply being who I am.”

Now, in 2021, Nellis Air Force Base seemed to have a positive reaction to the drag show: about 180 members of the Nellis community attended the event, McGarry said. While there aren’t currently plans to hold another drag show, base leaders are supportive of events that “reinforce the Air Force’s emphasis on diversity and inclusion toward recognizing the value every one of our Airmen bring to the team,” he added.

One person in particular who seemed to appreciate the show was Coco Montrese, who was one of the special guests at Nellis last week. Montrese was the 2010 Miss Gay America, and she has also appeared on the reality TV Show RuPaul’s Drag Race.

“Y’all we just did the first drag show on Nellis Air Force Base in Las Vegas. How freakin amazing is that?” Montrese told her fans on Instagram afterwards. “And the men are lovely on this Air Force base.”

The feeling was mutual.

“Thank you dahhlin!” wrote one Instagram user. “The show was amazing.”

Watch next: A Service Member Talks About Being Transgender And His Support Network