Pentagon expenditures "specifically associated with the Trump Turnberry ... amounted to $124,578.96." 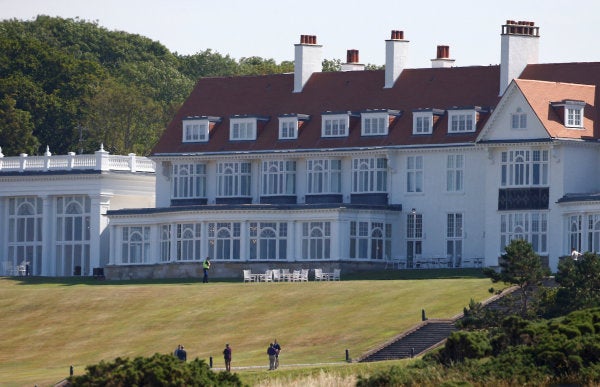 WASHINGTON (Reuters) – Documents from the Pentagon show that “far more taxpayer funds” were spent by the U.S. military on overnight stays at a Trump resort in Scotland than previously known, two Democratic lawmakers said on Wednesday, as they demanded more evidence from the Defense Department as part of their investigation.

In a letter to Defense Secretary Mark Esper, the heads of the House of Representatives Oversight Committee and one of it subcommittees said that while initial reports indicated that only one U.S. military crew had stayed at President Donald Trump's Turnberry resort southeast of Glasgow, the Pentagon had now turned over data indicating “more than three dozen separate stays” since Trump moved into the White House.

Committee Chairman Elijah Cummings and Representative Jamie Raskin, who chairs the civil rights subcommittee, said that while the Defense Department had not given Congress information about the total number of rooms it had booked at the resort, it did say the average cost of a room for U.S. service personnel between August 2017 and July 2019 was $189 per night.

They said the Pentagon had also informed them that during that time period, Pentagon expenditures “specifically associated with the Trump Turnberry … amounted to $124,578.96.”

If the Pentagon figures on the total costs are accurate, the lawmakers said, “it appears that U.S. taxpayer funds were used to purchase the equivalent of more than 659 rooms at the Trump Turnberry just since August 2017 – or the equivalent of one room every night for more than one-and-a-half years.”

Asked to comment, a Pentagon spokeswoman said: “As with all congressional correspondence, we will respond directly to the authors of the letter.”

The lawmakers said their estimate did not include another $59,729 in “unspecified charges to government travel cards” as well as $16.6 million in fuel purchased by the U.S. military at nearby Prestwick Airport between Jan. 20, 2017, and June 21, 2019.

The congressmen said they were concerned the department had refused to turn over communications with “outside entities” about Turnberry or Prestwick Airport, and instead had referred their inquiries to the White House.

In a recent exchange in Scotland's regional parliament, a Liberal Democrat member, Mike Rumbles, asked Scotland's government to confirm how much money Prestwick Airport had received from the U.S. military for its operations, and whether the government could confirm news reports that the Pentagon provided the airport's “largest single income stream.”

Scotland's Transport Minister, Michael Matheson, responded that Prestwick Airport had been used by military units since the 1930s for “stopovers and refueling.”

Matheson said the airport itself “generally” only booked rooms for the U.S. military at Trump's resort if other hotels were unavailable or customers specifically requested it. “There is no commercial relationship between Prestwick and Turnberry,” he said.