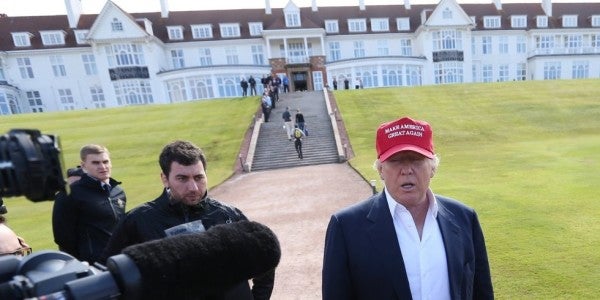 Politico reporters Natasha Bertrand and Bryan Bender first brought to light that Congress investigating why seven airmen stayed at Trump's Turnberry resort in March during a layover in Scotland.

On Sept. 9, Air Force Chief of Staff Gen. David Goldfein and Acting Air Force Secretary Matthew Donovan ordered the head of Air Mobility Command to review of how it determines which airports and hotels to use for overnight stops.

“The National Defense Strategy requires the Department of Defense and its personnel to exercise efficiency and fiscal prudence when spending taxpayer dollars,” Goldfein and Donovan wrote in their memo ordering the review. “Doing so is critical to our maintaining the trust and confidence of the American people and Congress.”

During Barrett's confirmation hearing on Thursday, Sen. Richard Blumenthal (D-Conn.) said he had learned service members and Defense Department civilians spent $140,000 at Trump-branded properties in the first half of 2017 alone.

Barrett promised she would provide Blumenthal with a complete accounting of how much the Air Force has spent on lodging airmen at Trump resorts, but Blumenthal pressed her to go even further.

“Will you commit to using a service-wide policy to prohibit all Air Force personnel from using Trump properties for military travel whenever operationally feasible?” Blumenthal asked. “You and I discussed the appearance – wholly apart from the reality – of the president profiting from Department of Defense expenditures at properties he owns is absolutely unacceptable.”

Barrett tried to avoid speaking about Trump resorts specifically by replying there need to be rules and regulations about travel dealing with the appearance of conflicts of interest that also “should not be specific to any particular owner.”

Not satisfied, Blumenthal argued Trump is violating the Constitution's foreign and domestic emoluments clauses, which are meant to prevent the president and other government officials from accepting money and gifts intended to influence them. He repeated his request that Barrett issue an Air Force policy to, “Prevent the commander in chief from profiting from Department of Defense expenditures.”

“I'll take a look at the rules and regulations on that and evaluate what policy should be issued,” Barrett replied.

But Blumenthal issued a not-so-veiled warning to Barrett that she would have to do more than that to get his support for her nomination.

“Before your confirmation, I hope you will provide a clearer answer to this committee,” he said.