Early in his unusual campaign for the presidency, Donald Trump laid out a simple, if inelegant, strategy for ridding the... 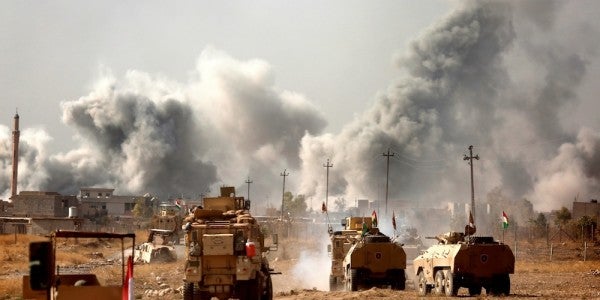 Early in his unusual campaign for the presidency, Donald Trump laid out a simple, if inelegant, strategy for ridding the Middle East of the scourge of ISIS: “bomb the shit out of ‘em.” Now almost eight months into his presidency, the commander-in-chief is making good on his promise: The Air Force has deployed more munitions against terror groups in Afghanistan in August than any other month in the last five years, according to U.S. Central Command’s latest summary of U.S. airpower in the region.

U.S. military aircraft deployed more than 500 weapons against ISIS, Taliban, and al-Qaeda targets as part of operations Freedom’s Sentinel and Resolute Support in Afghanistan during August 2017, the most since the same month in 2012, according to the monthly airpower statistics released by CENTCOM’s Combined Air Operations Center (COAC) at Al-Udeid Air Base that oversees air operations in Afghanistan, Iraq, Syria and 18 other countries throughout the region. Most of the munitions were released by F-16 fighter jets and MQ-9 Reaper drones.

The number represents a significant uptick from the 350 deployed in July, a noticeable acceleration of the U.S.-led air campaign in Afghanistan ahead of 4,000 additional troops’ arrival in the country to bolster the Pentagon’s existing force of 11,000 service members.

The operational tempo of U.S.-led air campaigns has increased dramatically against terror groups across the region Trump took office: So far this year, U.S. aircraft have deployed 2,487 munitions against enemy targets in Afghanistan, nearly double the number dropped during all of 2016, according to CENTCOM data.

The surge in air sorties has resulted not just in an alarming rise in civilian casualties, but rapid depletion of coalition arsenals that sent defense contractors scrambling to ramp up production on Small Diameter Bombs and the Joint Direct Attack Munitions guidance kits crucial to the U.S.-led air campaigns’ effectiveness. In May, Secretary of Defense James Mattis even “personally intervened” to jam as many “preferred munitions” into the Department of Defense’s fiscal year 2018 budget request, some $16.4 billion in missiles and munitions.

While the uptick in munitions expenditures in Afghanistan may appear as a tactical precursor for the additional troops in the coming weeks, Air Force Chief of Staff Gen. David Goldfein told Military.com that Mattis and top Pentagon planners are still hammering out the strategic details of the new deployment.

“We're in the process of doing the detailed planning that strategy,” Goldfein told Military.com. “And the discussion that we're having… is, 'What's the air-ground team that's required to be able to now execute the strategy that the president has laid out?'”

The long-term strategy in Afghanistan may change over the coming months, but even if the Trump administration’s current approach is short on details and heavy on resolve, one thing remains clear: “Bomb the shit out of ‘em” will likely remain a pillar of the Global War On Terror for the foreseeable future.