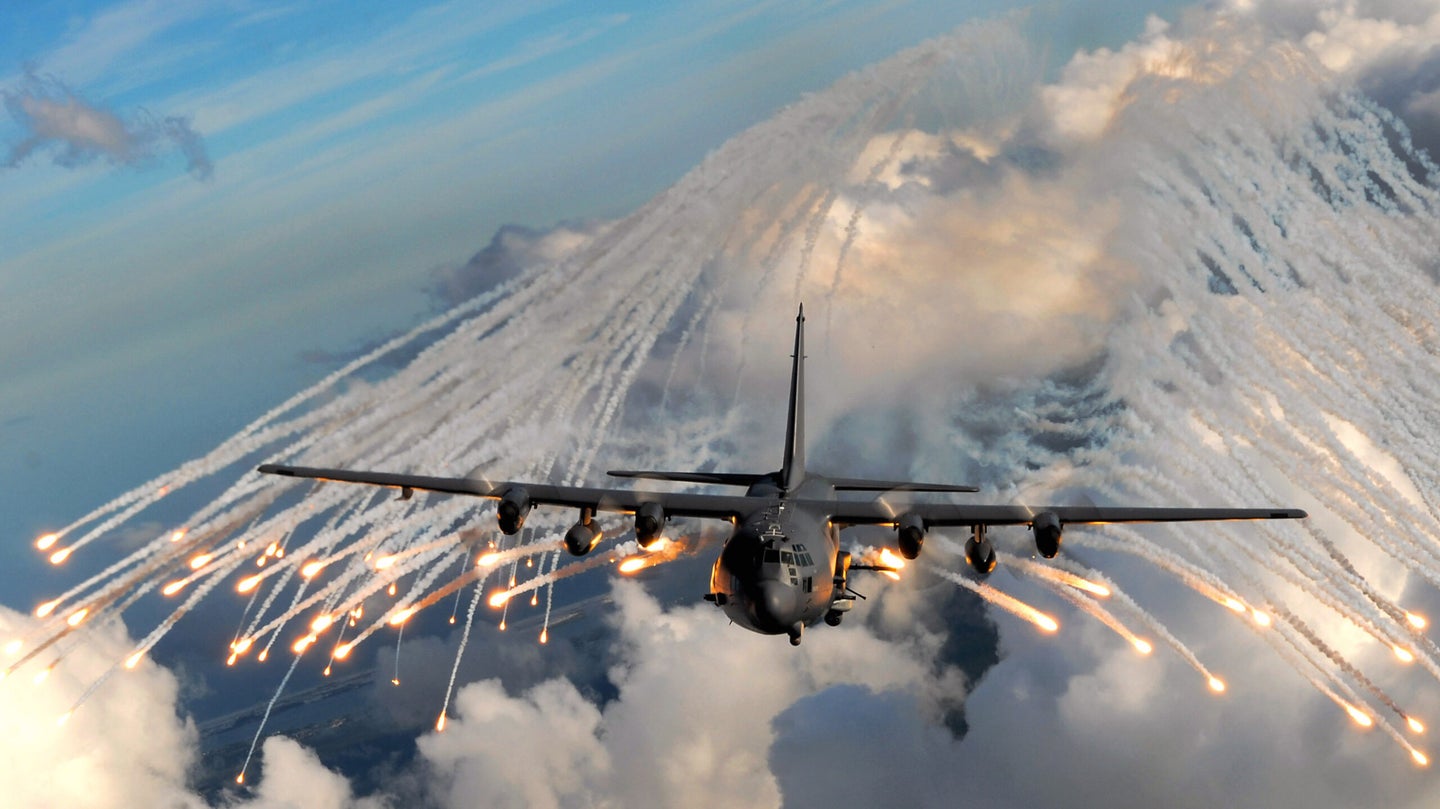 An AC-130U gunship jettisons flares Aug. 20 over an area near Hurlburt Field, Fla. The flares are a countermeasure for heat-seeking missiles that may be fired at the aircraft during real world missions. The aircraft is from the 4th Special Operations Squadron. (U.S. Air Force photo/Senior Airman Julianne Showalter).
SHARE

The security situation in Afghanistan is so bad that the U.S. Air Force has brought out some of its biggest guns in an attempt to stop the Taliban’s blitzkrieg throughout the country.

The U.S. Air Force has committed B-52 bombers and AC-130 gunships to support Afghan forces on the ground, Task & Purpose has confirmed. The Times of London was first to report about those U.S. aircraft being used to conduct airstrikes in Afghanistan.

No information was immediately available on how many airstrikes the B-52s and AC-130s have carried out recently.

Typically, AC-130s have been used in Afghanistan to support U.S. special operations forces but most American troops have left Afghanistan aside from several hundred service members at the embassy in Kabul.

In late July, Pentagon spokesman John Kirby confirmed the U.S. military was continuing to carry out airstrikes in Afghanistan even though the Afghan government has its own air force.

U.S. Central Command has not specified which aircraft are supporting Afghan troops and police.

So far, the airstrikes have not halted the Taliban’s rapid advance. The Taliban now control Kunduz City, which they had briefly captured in 2015 and 2016 before being driven out by Afghan security forces backed by U.S. airpower.

At least five more of Afghanistan’s 34 provincial capitals have reportedly fallen to the Taliban within the past week, including Zaranj, Sheberghan, Aibak, Sar-e Pul, and Taloqan.

A Taliban spokesman said on Monday that the group now controls the six provinces in which those cities are located. Task & Purpose was unable to independently verify the Taliban’s claim.

Elsewhere in Afghanistan, the city of Kandahar — Afghanistan’s second largest city — is under siege. Lashkar Gah, another important city in southern Afghanistan, is also being attacked. The Taliban commander in charge of the assault was reportedly one of several thousand prisoners whom U.S. government officials pressured the Kabul government to release.

In the west, the historic city of Herat, which saw the infamous 1978 rising that precipitated the Soviet invasion the following year, an aging warlord and his militia fighters are holding the Taliban at bay, for now.

And on Monday, the Taliban announced they had launched a four-pronged attack on Mazar-i-Sharif, which was taken by the Northern Alliance in November 2001 in the first major victory of the U.S.-led campaign in Afghanistan following the Sept. 11 terrorist attacks.

The U.S. embassy in Kabul announced on Saturday that all American citizens are urged to leave Afghanistan immediately.

“Given the security conditions and reduced staffing, the Embassy’s ability to assist U.S. citizens in Afghanistan is extremely limited even within Kabul,” the embassy’s statement says.

The Taliban continue to carry out an assassination campaign against Afghan pilots to deprive the Kabul government of its lone advantage: airpower. On Saturday, a bomb that exploded in Kabul killed Hamidullah Azimi, who was trained to fly UH-60 Black Hawk helicopters for the Afghan Air Force, Reuters reported. The Taliban claimed responsibility for the attack.

In little more than one month, the United States will commemorate the 20th anniversary of the Sept. 11 terrorist attacks. It is unclear how much of Afghanistan — if any — the Kabul government will control by then.