Combat Is No Longer Off The Table For Marines In Afghanistan

The Marines in southern Afghanistan are tasked with helping Afghan security forces from inside the wire, but their commander said... 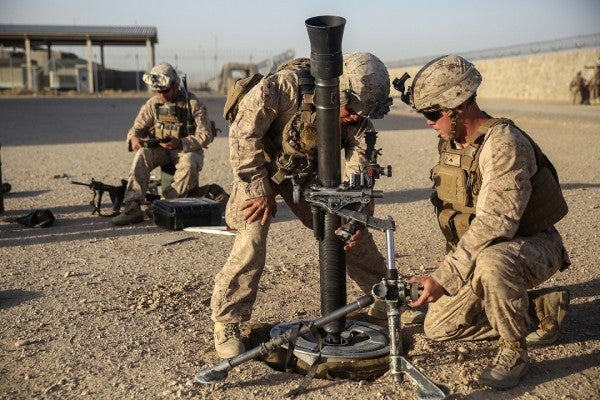 The Marines in southern Afghanistan are tasked with helping Afghan security forces from inside the wire, but their commander said it is also possible for them to go into combat.

Marine Brig. Gen. Benjamin Watson leads the second rotation of Task Force Southwest, which assumed the mission of advising Afghan troops and police on Monday. The Marines, mostly from Camp Lejeune, North Carolina, are trained to assist the Afghans with operations, logistics and other battlefield tasks.

Over the past nine months, Marine commanders have consistently said that the Marines in Helmand province do not accompany Afghan troops and police into battle, but on Monday, Watson gave a slightly different answer when asked if the Marines’ mission includes fighting alongside the Afghans.

“We have the authority to do that,” Watson told Task & Purpose. “Whether or not we exercise that authority is going to depend on how we assess the situation at the time, and obviously I’m not going to get into specifics on that.”

Nothing in Watson’s well-couched answer indicates that Marines are about to launch “Operation Marjah II: The Revenge,” but his comments leave the door open for Marines embedding with Afghan units when they battle the Taliban.

Until now, that wasn’t part of the mission. None of the roughly 300 Marines returning home from Helmand province after nine months has received a Combat Action Ribbon stemming from the deployment, Marine Corps Times reported last week.

Even though the Marines did not go into combat, they still got some. In October, the task force received a High Mobility Artillery Rocket System, which it used to destroy Taliban bomb-making factories and drug labs.

The strikes on the drug labs were part of a wider blitz by the U.S. military to choke off the Taliban’s financing. Air Force fighters and bombers also attacked the Taliban’s narcotics network.

However, Watson cautioned that the task force is only interested in eliminating drug labs that finance Taliban operations. The broader counternarcotics mission falls under the Afghan government’s purview. Ultimately, success in Afghanistan will require an Afghan solution, he said.

“We’re focused on the security lane and try to set the conditions for the Afghans to achieve some kind of sustainable solution in the long term,” Watson said.

Toward that end, the Marines will expand on efforts over the past nine months to advise Afghan units at the brigade and the battalion level, he said.The new task force brings “some enhanced capabilities” that will allow more Marines to deploy to Afghan base.

During the previous rotation, small teams of Marines known as “expeditionary adviser packages”  reportedly traveled to Afghan forward operating bases to help Afghan units with fire support and other missions.

The new task force brings “some enhanced capabilities” that will give the Marines the security needed to deploy to Afghan bases, which are spread out across Helmand province, Watson said.

“It’s more persistent advising as opposed to episodic advising at a lower level,” Watson said. “We’ll be able to increase the number of units that we advise on a persistent basis, but we’ll still retain the capacity to episodically advise other units, as the mission requires.”