As The War In Iraq Winds Down, The US Military Shifts Its Attention To Afghanistan (Again)

For the second time in recent history, the winding down of U.S. military operations in the Middle East has allowed... 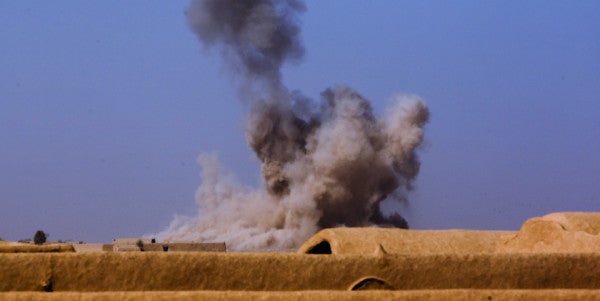 For the second time in recent history, the winding down of U.S. military operations in the Middle East has allowed the Pentagon to ramp up the war in Afghanistan. While U.S.-backed forces fight to liberate the few remaining ISIS holdouts in Iraq and inch closer to victory over the terror group in Raqqa — its last major stronghold in the region — the coalition bombing campaign in Afghanistan is dramatically escalating.

A total of 751 airstrikes were carried out against ISIS and Taliban targets in Afghanistan in September, according to U.S. Air Forces Central Command — a 50% increase over the previous month. That’s also the most bombs dropped on the country in one month since 2010, when President Barack Obama deployed 30,000 additional troops in an attempt to beat back the Taliban, which had resurged while the U.S. military was busy fighting the war in Iraq, according to Newsweek.

“This increase can be attributed to the president’s strategy to more proactively target extremist groups that threaten the stability and security of the Afghan people,” USAFCENT said in a declassified report. “Additionally, the recent addition of six F-16s at Bagram Air Base, coupled with more B-52 missions dedicated to Afghanistan, offer the additional strike capacity needed to target these groups.”

The same report shows that 3,550 coalition bombs were dropped in Iraq and Syria in September, a 30% decrease from August’s record high of 5,075.

The Taliban has made tremendous gains since the NATO combat mission in Afghanistan officially ended in late 2014, seizing huge swaths of territory and inflicting major casualties on both Afghan forces and civilians. 2014 is also the year ISIS launched a lightning offensive across Iraq, taking key cities like Fallujah and Mosul and drawing coalition forces back into the region for another protracted military campaign that eventually extended into neighboring Syria. ISIS also managed to establish a foothold in Afghanistan during that period.

The bulk of the 11,000 American troops currently stationed in Afghanistan are focused on training and advising local forces battling the Taliban. Meanwhile, a small contingent of U.S. special operators are waging a separate campaign against ISIS in the country’s east. An additional 3,000 American troops are scheduled to deploy to Afghanistan in the coming months, at a cost of $1.1 billion.

In early October, Secretary of Defense Jim Mattis announced that President Donald Trump had given him the authority to loosen the Obama-era rules of engagement in Afghanistan to expedite the fight against ISIS and the Taliban, and that he had done just that. “Restrictions that didn’t allow us to employ the airpower fully have been removed,” he told the House Armed Services Committee on Oct. 3. “We are no longer bound by the need for proximity to our forces.”

The USAFCENT statement seems to suggest that the loosened rules of engagement help account for the increase in coalition airstrikes. However, American service members and officials on the ground in Afghanistan suggested in interviews with the New York Times last week that the new, more aggressive rules of engagement have yet to be implemented there.