The leader of ISIS forces in Afghanistan was killed in a U.S. strike in eastern Afghanistan last week, the Department... 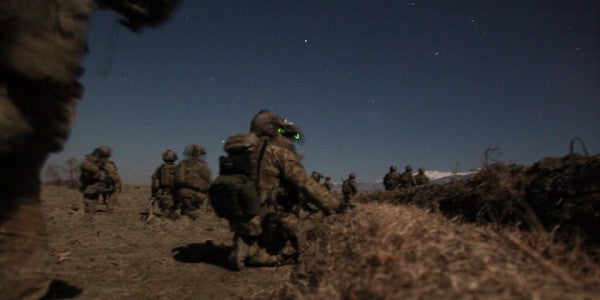 The leader of ISIS forces in Afghanistan was killed in a U.S. strike in eastern Afghanistan last week, the Department of Defense confirmed on July 14.

Abu Sayed had served as the emir of Islamic State of Iraq and Syria-Khorasan, known as ISIS-K, for less than three months when American troops raided the group’s headquarters in Afghanistan’s Kunar Province on June 11, killing him and an unspecified number of other militants.

In a statement, the Pentagon touted the strike as a major milestone in its campaign to uproot ISIS-K, one that “will significantly disrupt the terror group’s plans to expand its presence in Afghanistan.”

The death of Sayed marks yet another devastating blow to ISIS, which is quickly losing ground as the U.S. and its allies ramp up the campaign to annihilate the terror organization. Until recently, the group held huge swaths of territory throughout the Middle East and has been fighting to establish footholds in Africa and South Asia.

Sayed’s predecessor, Abdul Hasib, suffered a similar fate. Hasib was killed on April 27 in a raid carried out by U.S. Special Operations troops in Nangarhar Province, where the group has been most active since surfacing in the region more than two years ago. Sayed is the fourth emir of ISIS-K to die in a U.S. strike.

Afghan and U.S. forces launched a campaign in eastern Afghanistan in early March to, as the Pentagon characterized it, “send a clear message to ISIS that there is no sanctuary for their fighters in Afghanistan.” Hundreds of ISIS fighters have been killed or captured in the operation, which has distracted from the bigger mission of beating back a resurgent Taliban.

There are currently roughly 8,400 U.S. troops in Afghanistan with several thousand more expected to deploy there in the coming months. Bolstered by about 5,000 additional NATO troops, their primary mission is to advise and assist Afghan forces fighting the Taliban, as the U.S. enters its 16th year in a war launched in response to the September 11 terror attacks.

Meanwhile, a smaller contingent of Special Operations troops are focused on the fight against ISIS-K. Six of the seven American service members killed in Afghanistan so far this year have died while involved in that mission.

But the primary target for the U.S. military in the country remains the Taliban, which in recent years has reversed many of the battlefield gains made by American troops and their allies at the height of the occupation. NATO’s combat mission in Afghanistan officially ended in late 2014 and the Taliban swiftly moved in to fill the void, seizing key terrain and inflicting massive casualties on Afghan national forces.

“We are not winning in Afghanistan right now, and we will correct this as soon as possible,” Secretary of Defense Jim Mattis said last month while delivering an assessment of the war to lawmakers on the Senate Armed Services Committee.

Mattis promised to deliver a finalized strategy for turning the conflict around by mid-July.