The U.S. military is still holding the Mother of All Bombs over the Taliban’s heads like 21,600-pound GPS-guided sword of... 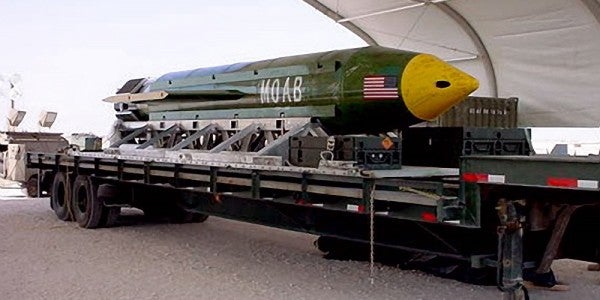 The U.S. military is still holding the Mother of All Bombs over the Taliban’s heads like 21,600-pound GPS-guided sword of Damocles.

In April 2017, a U.S. aircraft dropped a GBU-43/B Massive Ordnance Air Blast bomb on a cave complex being used by the Islamic State’s affiliate in Afghanistan, marking the first time the weapon had been used in combat.

“We never take anything off the table,” Hecker told reporters at the Pentagon on Wednesday. “Right now, we don’t have a use for it, but if we do, it’s there for us.”

The bomb was rapidly designed and built between November 2002 and March 2003, ahead of the initial invasion of Iraq. It was designed to be a replacement for the massive BLU-82 “Daisy Cutter,” according to the Air Force. When it was first tested on March 11, 2003, the explosion created a mushroom cloud that could be seen from 20 miles away.

By the time the MOAB arrived in theater, coalition forces were close to Baghdad. It would be 14 years before the weapon would make its debut when it was dropped in Afghanistan’s Nangarhar province following the death of a Special Forces soldier fighting ISIS-Khorasan.

News that the bomb had finally been used created a media sensation that made Hecker’s mother concerned about him.

“Quite honestly, after only being here a week and my mom heard that a MOAB was dropped, she immediately sent me a note and asked if I was OK,” Hecker said at Wednesday’s news conference. “I let her know that we won’t drop on ourselves. This is meant for the enemy.”

Related: Here's What The 'Mother Of All Bombs' Did For US Fight In Afghanistan »

With ISIS fighters going underground in Iraq and Syria, U.S. Central Command has made Afghanistan the priority for air operations.

U.S. forces in Afghanistan now have 50 percent more MQ-9 Reaper drones to find targets, as well as an A-10 squadron to provide close air support, Hecker said. A combat search and rescue squadron is also being deployed to the country.

On Feb. 4, a B-52 dropped a total of 24 precision-guided bombs – a new record – during three airstrikes against Taliban and East Turkestan Islamic Movement training camps in northeast Afghanistan, Hecker said. Previously, B-52s only had room for 16 precision-guided bombs, but in late November, the bomber was modified for an increased payload at Al Udeid Air Base in Qatar.

Meanwhile, the Afghan air force is dropping or launching weapons at the enemy at nearly double the rate of U.S. aircraft, Hecker said. However, he clarified, most of those strikes come from the Afghan fleet of 25 MD-530 helicopters, which are equipped with laser-guided rockets and machine guns.

Hecker conceded that strikes from a light attack helicopter and a B-52 don’t exactly make for an apples-to-apples comparison. “But I wouldn’t say it’s apples to oranges either,” he said.

“If you’re on the other side of that rocket and you’re a Taliban, you probably don’t care if it’s a rocket or if it’s a that’s hitting you in the forehead,” Hecker said.