Despite the hullabaloo over the U.S. Air Force’s decision to drop the GBU-43 Massive Ordnance Air Blast (MOAB) in Nangarhar... 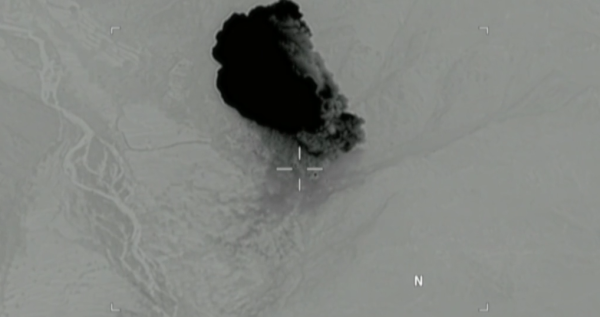 Despite the hullabaloo over the U.S. Air Force’s decision to drop the GBU-43 Massive Ordnance Air Blast (MOAB) in Nangarhar province in Afghanistan, we still don’t really understand the scope of the destruction caused by the “mother of all bombs.”

Sure, the footage of the detonation released by the Department of Defense is damn impressive, and reports suggest the blast killed at least 94 ISIS militants. But the Pentagon has remained relatively tight-lipped on the impact of the devastating weapon, and local media reports allege that U.S. forces have sealed off the area from civilians, journalists, and Afghan security forces.

But new satellite photos from aerospace firm Airbus Space and Defense appear to capture the devastating impact of the MOAB in all its glory:

The War Zone suggests that, based on these photos, the MOAB did exactly what it was supposed to do: flatten everything in its blast radius. “The massive air blast appeared to have worked just as advertised, with the mountainside focusing it effects, and the shock wave expanding down into the valley below,” The War Zone’s Tyler Rogoway observes. “The images above also closely correlate with the official infrared video we have seen of the strike.”

Meanwhile, the New York Times reports that despite the bomb’s high casualty rate, ISIS militants continue to engage American troops and Afghan security forces “who are calling in more airstrikes to target the militants’ positions.”

That’s okay, though! If Mattis is impressed, then so are we — and even the secretary of defense isn’t too fixated on body counts.

“For many years we have not been calculating the results of warfare by simply quantifying the number of enemy killed,” Mattis told reporters of the MOAB during his trip to the Middle East on Thursday. “You all know of the corrosive effect of that sort of metric back in the Vietnam War. It’s something that has stayed with us all these years … You don’t want to start calculating things, as far as what matters, in the crude terms of battle casualties.”