Last week, the Iranian military showcased the newest version of its Qahar F-313 stealth fighter jet for government officials and... 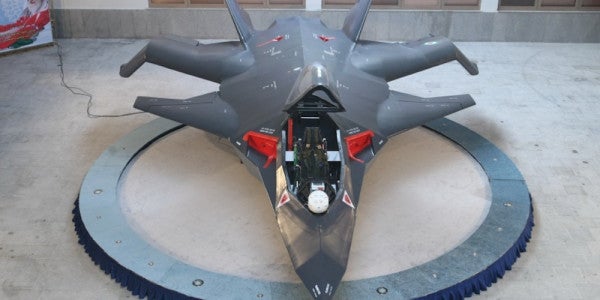 Last week, the Iranian military showcased the newest version of its Qahar F-313 stealth fighter jet for government officials and defense contractors at Meherabad Air Base, just weeks after the Iranian defense ministry announced that the fifth-generation fighter had passed operational testing and was nearing serial production.

But there’s a problem: The new aircraft looks like a complete pile of garbage.

This should surprise no one. When the Qahar, or “Conqueror” in Farsi, was initially unveiled in 2013, Western observers quickly dismissed the sleek aircraft as “a hoax,” a mock-up constructed purely for domestic propaganda purposes, UPI reports. Many cited “several aesthetic irregularities” in the aircraft’s design; Steve Weintz at War Is Boring noted that the “buzzard-sized” puddle-jumper is far from large enough to carry a payload of bombs and missiles, let alone a pilot.

[T]he new Qaher seems to lack internal weapons bays—despite Iranian claims to the contrary. Moreover, the Qaher has numerous “hot spots” where its radar cross-section would spike. Additionally, the thick, rounded leading edges are “very non-low observable”—as are the control surfaces on the fixed canards. Basically, any claims that the F-313 might be a stealth aircraft are laughable.

Overall, the new F-313 appears to be a more realistic mockup—but it is doubtful that it is a real flyable aircraft.

As far as radar signature goes, “some parts are laughable,” the scientist said. Specifically, he said the downturned wingtips reminded him of something out of “Star Trek” and the vertical or near vertical fins on the plane would light up a radar.

Writing for Vice's Motherboard, journalist David Axe said the F-313 — which does not fly in the video — had its tire pressure stenciled on the outside of the plane and that it was way too low for a full-sized airplane weighed down with instruments and fuel.

The scientist says the tire pressure “takes away all doubt that it's a fake.”

Of course, this doesn’t mean that Iran won’t field an operational stealth fighter in the future. China's J-31 fighter jet — comparable to the U.S. Air Force’s F-35, thanks to classified data stolen by a Chinese national — could easily end up stationed at Iranian airbases.