This Running Back-Turned-Soldier Is Trying To Return To Football

After four years as a U.S. soldier, and seven years away from the NFL, Glen Coffee is trying to return... 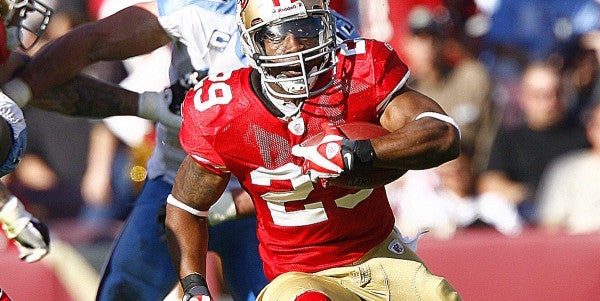 After four years as a U.S. soldier, and seven years away from the NFL, Glen Coffee is trying to return to football,the NFL Network reports.

Coffee played briefly for the San Francisco 49ers as a running back after being drafted in the third round of the 2009 NFL draft from the University of Alabama.

In his lone season as a pro football player, Coffee put up decent numbers as a backup. He ran for 226 yards on 83 carries, and added 76 receiving yards over 11 receptions. He found the end zone once.

But after that season, Coffee unexpectedly retired. He would later say he fell out of love with football.

In 2015, the Washington Post’s Dan Lamothestumbled upon Coffee when Lamothe was covering the first group of women to attend the Army’s elite Ranger school. Lamothe reported that Coffee had planned on joining Special Forces, but wound up assigned as a paratrooper at Ranger School. He now works for 6th Ranger Training Battalion in the waterborne operations section, according to Lamothe.

But now, out of the Army, Coffee wants to see if he can play football again. After he came out of retirement on April 21, the 49ers promptly waived their rights to his contract, making the soon-to-be 30-year-old a free agent.With a running back-rich NFL draft fast approaching on April 30, it remains to be seen how much interest Coffee will garner on the free-agent market.

One advantage he may have? Coffee told Lamothe that the Army put him in better shape than football ever did.

“My cardio and endurance is definitely a lot better right now,” he said. “Because in football, you’re not really in shape. People think you’re in shape, but you’re really not. Not like that.”

CORRECTION: This article incorrectly referred to Coffee as a Ranger in the headline. He works for 6th Ranger Training Battalion in the waterborne operations section, but is not a Ranger himself. (Updated: 4/24/2017; 5:54 pm)