The star shooter of North Salem Vikings Army JROTC in Oregon is 16-year-old Taylor Gibson. For three years, she’s been... 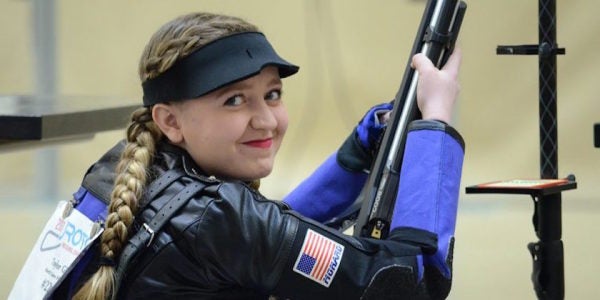 The star shooter of North Salem Vikings Army JROTC in Oregon is 16-year-old Taylor Gibson. For three years, she’s been recognized as one of the best air rifle shooters in the country. Now, after an incredible performance at 2017 JROTC National Air Rifle Championship in Anniston, Alabama, Gibson has her gold medal, and set a new Army overall shooting record, according toa release from the Civilian Marksmanship Program.

Gibson shot a 3×20 score of 597-48x, and left with a two-day overall score was 1290.1. According toguns.com, in order to have this score, Gibson could only have missed two or three shots outside of the center 10-inch ring of the 60 total shots fired, 20 shots each from the standing, kneeling, and prone positions.

“I came in and thought, I don’t care what I shoot – I’m just going to do the best that I can. And I did the same thing every shot,” Gibson told the Civilian Marksmanship Program. “That’s what I kept telling myself, especially in the last few shots of kneeling when I was really thinking, ‘Okay, this is when I really need to get serious, because something could happen here.’”

With her last shot, a perfect shot in the kneeling position, Gibson set a new national record in the Army for overall score.

“I didn’t realize how many people were watching until I shot my last shot and everybody started clapping, and I look back and there are coaches standing in a line behind the chairs, just watching me,” Gibson told the Civilian Marksmanship Program. “I didn’t realize that I had gotten attention from other people besides my team. That’s when I knew it was big.”

This was her third trip to the JROTC national championship. In 2015 and 2016, Gibson walked away with silver medals.

Two years ago, during her first visit, when she was still in middle school, Gibson madethe Statesman Journal in her hometown of Salem, when she placed second in the national air rifle JROTC shooting competition.

Back then, she said, “A lot of people are like, you don't seem very excited. Inside my mind is exploding, it seems like. And I'm just thrilled and I love the challenge.”