“People seeing us doing that — that will spread." 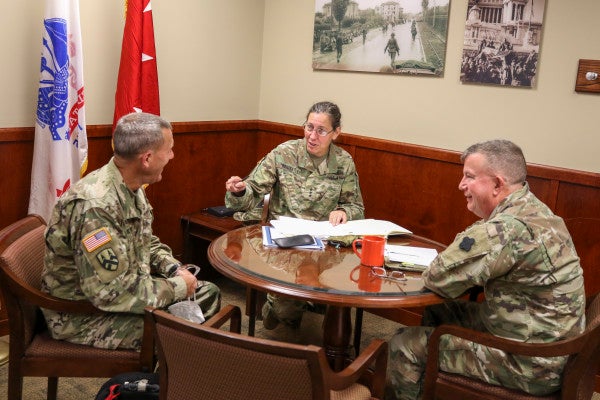 Lt. Gen. Jody Daniels isn’t going to wait to see if Army Reserve units actually live out the service’s “This Is My Squad” mantra — she’s planning to show up, unannounced, and ensure they are herself.

“This is My Squad” seems to be the Army’s focus on how to address many of the challenges that the service is facing, such as stopping sexual harassment, assault, and suicide, and increasing diversity in the ranks. The idea is that if soldiers in a unit really get to know one another, they’ll look out for one another, they’ll better understand one another, and they’ll notice when something seems “off” with one of their teammates.

It falls directly under the Army’s “People First” strategy, and when Task & Purpose asked Daniels, the new head of the Army Reserve, how she and other senior leaders were going to ensure that the message was getting to lower echelon units, her answer was simple: She and Command Sgt. Maj. of the Army Reserve Andrew Lombardo are planning to drop in on random virtual staff meetings, and ask soldiers about it themselves.

Daniels said they plan to start doing that in the next month or so and have quick 10 to 15 minute conversations with the soldiers they drop in on, to reinforce “our interest in these topics at that level.”

“People seeing us doing that — that will spread,” Daniels explained during a (socially distanced) interview in her office on Sept. 1. “Like, ‘Oh my gosh, guess who just showed up at my staff meeting, completely unexpectedly.’ That will sort of get at reinforcing the message.”

Daniels has been in the job for a little over a month now after swearing in on July 28. She’s had an extensive career in military intelligence with over 36 years total of active duty and reserve service, most recently having served as the commander of the 88th Readiness Division. In her civilian career, she has worked as the director of advanced programs for Lockheed Martin’s Advanced Technology Laboratories (LM ATL), and as a manager and engineer in LM ATL’s Artificial Intelligence Laboratory.

Daniels said her priorities aren’t much different than those of her predecessor, Lt. Gen. Charles Luckey. But she is stepping into the role in the midst of what Army Secretary Ryan McCarthy has described as a “reckoning” within the Army over diversity in the force.

Daniels, like other senior leaders, mentioned that in the weeks following the death of George Floyd, she “took a step back” and had discussions with non-commissioned officers she had worked with in the past about their experiences with race, and “learned a lot” from what they had to say. But there’s still more learning ahead.

On top of the important challenges the Army is facing when it comes to diversity and better taking care of its people, there’s also a physical challenge coming to soldiers soon: the new Army Combat Fitness Test.

The ACFT will become the test of record in October, though the service has had to adjust its rollout to accommodate issues that have cropped up since the novel coronavirus (COVID-19) pandemic swept the nation. One of the big topics of discussion in the beginning stages of the ACFT rollout was how women would fare; preliminary scores that leaked last year showed an overall failure rate of 84% for women.

But Army leaders, Daniels among them, have maintained that it’s doable, and projected confidence that soldiers will be able to adjust to the new standard.

“I’m a firm believer that this is what our Army needs in order to be able to be effective out in combat,” she said. “We need functional fitness, we need to be much more resilient and not doing repetitive exercises.”

Daniels — who said she’ll sometimes listen to 1980s rock while she exercises — has been into functional fitness for the last two years or so, but she admitted that training for the ACFT and being told she couldn’t do certain things until she nailed the right form was a “humbling” experience.

She also mentioned another priority other Army leaders have mentioned: holistic health. It’s not enough to just be fit, it’s also important to eat well and get enough sleep (which Daniels said the Army “certainly” doesn’t do).

“My husband had to scale back and we had to do portion control,” Daniels said, laughing. “Because he cooks, and I was loving what he was cooking, but I couldn’t afford to eat as much. And so we had that conversation. It’s like, ‘Dear, I love your cooking, but I need less of it!’”

Daniels's husband, retired Army Col. John McCarthy, is also from the intelligence field, though they'd never met before running into each other one day (literally — she said they were both out running). She said that he has been her “supporter, basically since we met,” and is a valuable resource having been a service member himself before transitioning into the role of an Army spouse.

“I’m following some of these women through doors as I hope that I’m opening a door for other women to follow me,” she said, admitting that she doesn’t exactly see herself as “a big deal.”

“It’s hard for me to wrap my brain around me being a big deal. The thing is a big deal. But me, Jody Daniels, it’s kind of like, I’m doing what I’ve always been doing,” she explained.

“I’ve been doing these great jobs, doing this stuff, I’ve had great leaders — how can I continue to do that? How can I lead the Army Reserve and it’s 200,000 soldiers and civilians, across 20 time zones, to be their best?”

Correction: This post has been corrected to reflect that Daniels plans to drop in on Army Reserve staff meetings with Command Sgt. Maj. Andrew Lombardo, not Sergeant Major of the Army Michael Grinston.