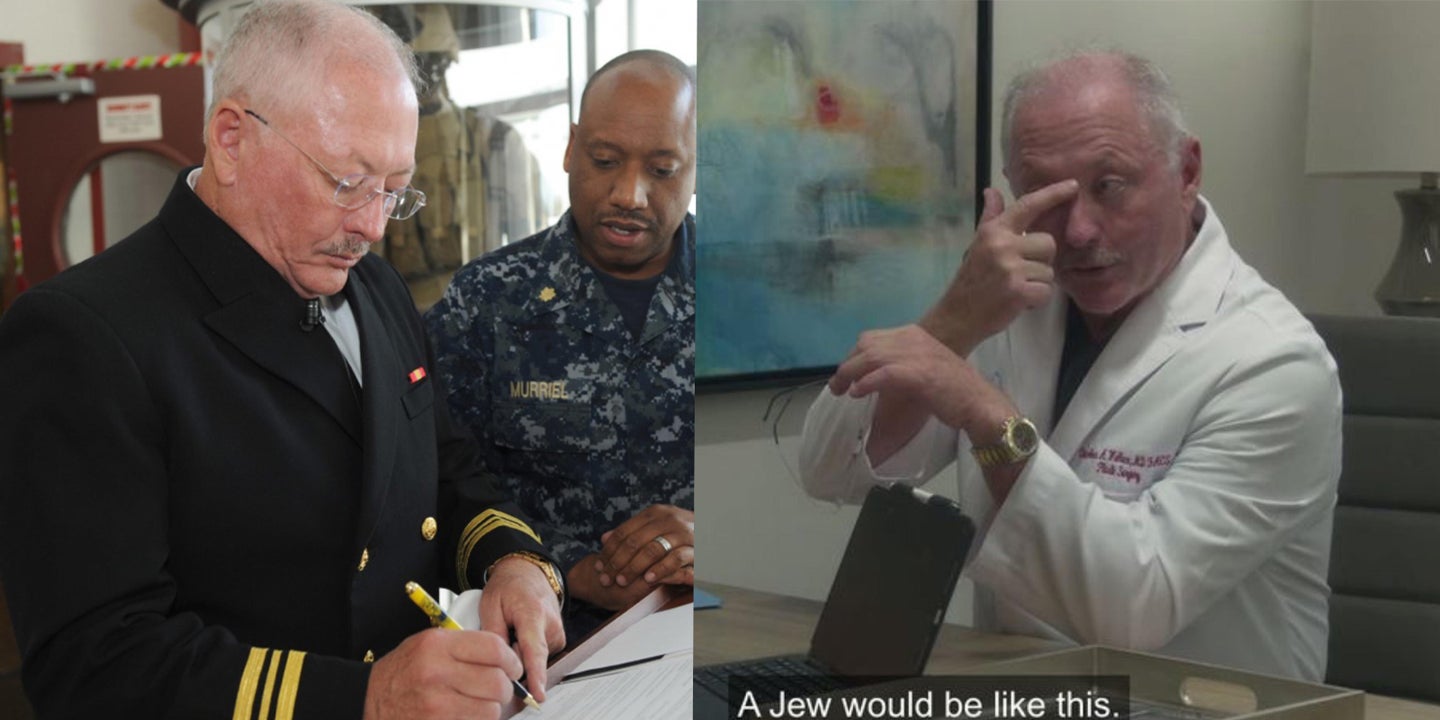 The film, a sequel to 2006’s Borat, premiered Oct. 23 on Amazon Prime and includes Cohen in his titular role as the fictional Kazakh journalist, Borat Sagdiyev. But this time he’s joined by his teenage daughter Tutar (played by 24-year-old Maria Bakalova), who he tries to marry off, first to Vice President Mike Pence, and later to Rudy Giuliani.

In one scene about halfway through the movie, Borat takes Tutar to Beauty by Design in Dallas, Texas, where they meet with Dr. Charles Wallace, a plastic surgeon who also happens to be a commander in the Navy Selected Reserves.

Wallace’s appearance in the film, which is part mockumentary and part cringe-inducing performance art, was first noted on Reddit. That scene from Borat Subsequent Moviefilm can be viewed below (Courtesy of Four by Two Films):

During the scene, Borat explains that he wants his daughter to be more attractive to a “top-level guy,” at which point Wallace suggests a nose job. Tutar then asks, “what’s wrong with my nose? Do I look like a Jew?” as the conversation devolves into anti-Semitic stereotypes.

Wallace responds “no ma’am, not at all,” before making a gesture to suggest an enlarged nose and saying, “because a Jew would be like this.”

Borat then uses his hand to show how a “Jew nose” would go out much further from the face, to which Wallace responds, “it can be that bad, yes.”

The scene ends with Wallace nonchalantly suggesting breast implants, and smiling awkwardly when Tutar asks if he would want to have sex with her, before saying, “if your father was not here.”

Wallace did not immediately respond to a request for comment from Task & Purpose.

According to Cmdr. Ben Tisdale, a spokesman for the Navy Reserve, “Wallace participated in the film Borat 2 in his civilian capacity” and not as a Selected Reserves sailor.

“While the United States Navy does not tolerate discrimination of any kind within our ranks for any reason, [Selected Reserve] sailors, in their civilian capacity and not in a paid-status, can participate in media productions such as movies and television without official Navy endorsement, approval, or oversight.”

“To be clear, the Navy Reserve did not endorse Wallace’s participation in the film, nor did we endorse anything he said or did in the film,” Tisdale added.

A reserve medical corps officer, Wallace’s most recent duty assignment was to Expeditionary Medical Facility Jacksonville Detachment C, at Fort Worth Texas, though he’s served at bases and units across the country. Additionally, Wallace was profiled in a 2016 Department of Defense news story, which highlighted the Selected Reserves program through which he received his commission on Dec. 19, 2016.

UPDATE: This story has been updated to include a related clip from Borat Subsequent Moviefilm.