Soldiers will start taking the new Army fitness test in October, but don’t worry — it doesn’t count yet

If you've been struggling with the leg tuck, we have some good news. 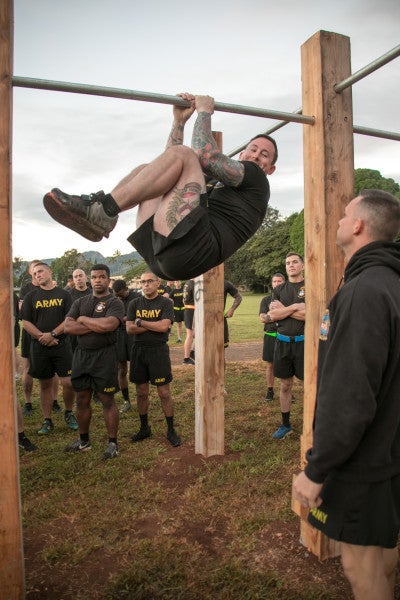 Soldiers will be taking an altered version of the new Army Combat Fitness Test in October, but the service is still delaying the use of ACFT scores for promotion considerations, according to the Army's top enlisted leader.

The Army had always planned for the ACFT to be the test of record by Oct. 1, but had to make adjustments in the face of the novel coronavirus (COVID-19) and put a pause on training. That pause is still in place, and Army leaders aren't sure when exactly the test will really start counting.

“We don’t know what the country’s going to look like two weeks from now, from a COVID perspective. So it’s hard to say — does COVID come back even harder in the fall? And we don’t have a vaccine, or we do have a vaccine?” Sgt. Maj. of the Army Michael Grinston said during a roundtable discussion on Monday. “I’m cautious to give you a hard date because the conditions are so fluid.”

Though soldiers would start taking the test in a few months, results will “not be used for any flagging or adverse action,” according to Grinston. He said just taking the test is important for soldiers to figure out what areas they need to work on.

For many, that seems to be the leg tuck portion of the test. But Grinston mentioned on Monday that the “ACFT 2.0,” as the Army put it, will allow soldiers to substitute a two-minute plank for the leg tuck.

The plank is not a permanent substitute, but is meant to help soldiers strengthen their core to perform better in the leg tuck event.

“What we needed is a bridging strategy to transition to the full ACFT, and planks are a good core exercise for those soldiers that may have not had the opportunity or the equipment to initially train for the leg tuck as we're working through ensuring that all of our Army National Guard and Army Reserve locations have the pull-up bars so that they can appropriately train for the actual event,” Maj. Gen. Lonnie Hibbard, commander of the U.S. Army Center for Initial Military Training, said on Monday.

“But it doesn't preclude them from working on their core strength as we go.”

The rest of the events — including the dead-lift, standing power throw, pushups, two-mile run, and sprint, drag, carry — are unchanged. Hibbard said in the Army press release that the change back to the leg tuck for soldiers who are using the plank should be “anywhere between six to three months.”

Before training for the tests was suspended in March, Hibbard said there were around 65,000 ACFT scores entered into the Army's system, and he expects for there to be 135,000 scores documented by the end of this fiscal year.

Currently, he said, 95% of ACFT equipment has been distributed.