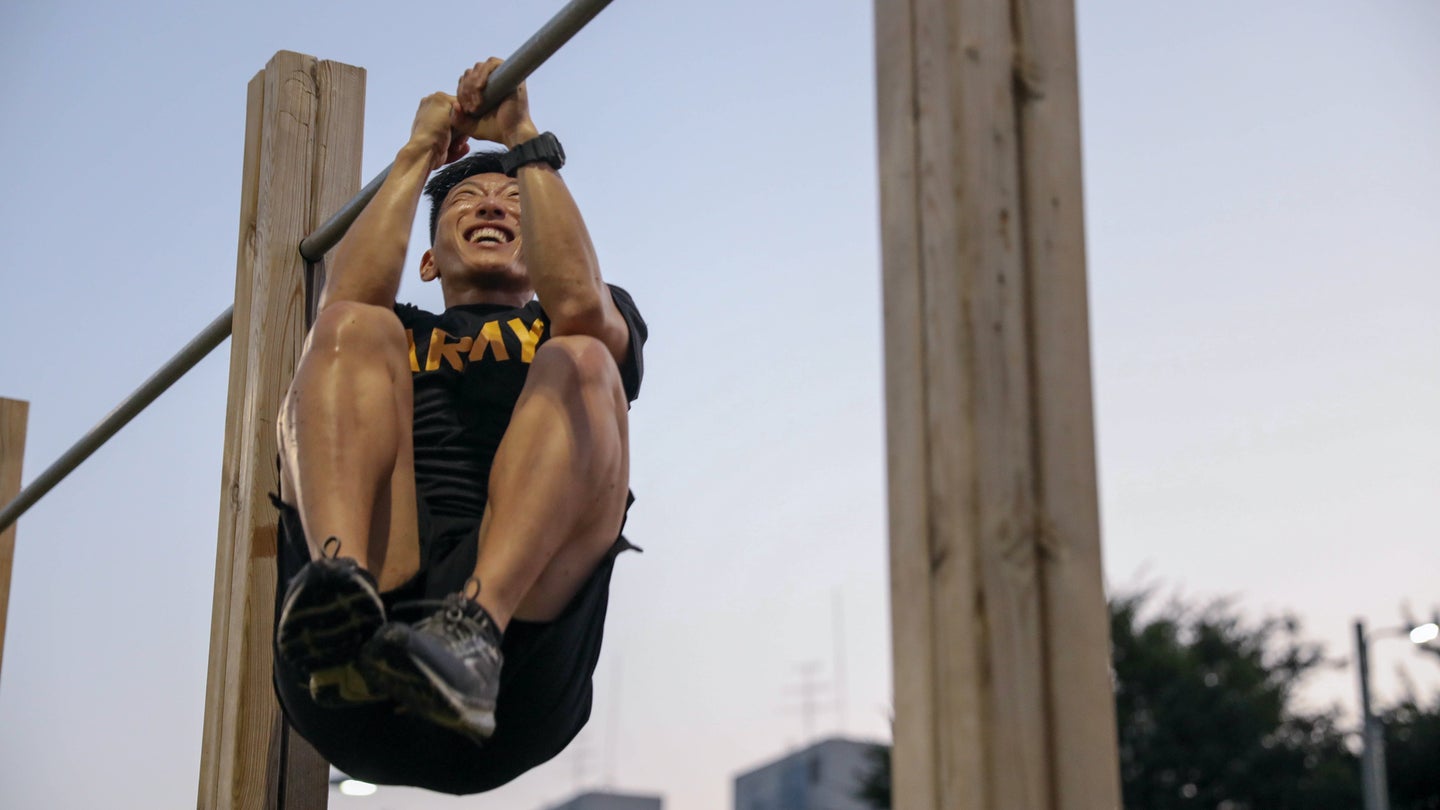 After causing no shortage of controversy and arguments since its introduction five years ago, the leg tuck has been officially struck from the Army Combat Fitness Test.

The change, which will no doubt draw both praise and eye-rolls from soldiers around the force, is the result of a months-long study of the Army’s fitness test from the RAND Corporation. The results, which included RAND’s recommendations to the Army on how to fix the test, were released on Wednesday along with the Army’s directive on what the combat fitness test, called the ACFT, will look like moving forward.

The test will be the Army’s official fitness test starting on April 1, though the rest of the rollout will depend on what component each soldier is in. Soldiers on active duty and in the Active Guard Reserve, for example, will begin taking the test for entry into their service record on Oct. 1, while soldiers in the Reserve and Army National Guard will not take it for an official score until April 1, 2023.

The announcement this week follows years of back-and-forth regarding the ACFT. While Army leaders appeared to be all-in from the very beginning, advocacy groups and lawmakers almost immediately raised red flags with the test. Part of that led to the recently released RAND study and new changes to the test.  The 2021 National Defense Authorization Act directed the Army to commission an independent study of the ACFT.

Concerns over the test worsened when preliminary scores leaked in September 2019 showed women failing the test at a drastically higher rate than men. The test also sparked a discussion about the Army’s health standards, which haven’t changed despite the new fitness test requiring soldiers to lift weights and pack on muscle in a way they weren’t asked to do with the old fitness test. The Army has since started a study of its height and weight requirements to answer questions about whether those standards are outdated and inaccurate.

While the RAND study had a plethora of take-aways, its primary findings were that the Army’s evidence supporting the ACFT was incomplete; that some groups — women, and soldiers in the Reserve and National Guard — failed at “noticeably higher rates” during the study period; training programs within the Army had a positive impact on soldiers’ fitness but that more work needed to be done; and that the Army needed to create a “formal management structure” to help oversee the ACFT and assist senior leaders in making decisions around any future changes.

“Considering the pass rates we observed,” the RAND report says, “it appears that many soldiers would be failing if the test were instituted today, including soldiers who are otherwise in good standing in the Army … Regardless of how or whether the Army fully implements the ACFT in April 2022, central our recommendations is the Army’s commitment to continued senior leadership oversight and guidance in monitoring the ACFT’s implementation over the long term.”

The Army is indeed implementing the test in April this year, and because of RAND’s study there are a few things to make note of — among them is the way the test will be scored. The Army originally hailed the test as age- and gender-neutral, and scored according to a soldier’s military occupational specialty.

None of that is going to be included moving forward.

While the Army pushed for gender-neutral testing originally, Sgt. Maj. of the Army Michael Grinston didn’t seem to have concerns about separating scores by gender on Monday. The Army has to “communicate to our soldiers that this is a much better test than what we had in the past,” he said, adding that “some of the stigma” around women in the military has been eliminated through other gender-neutral standards in the Army.

Separating scores by gender “more accurately assess individual physical fitness,” said Brig. Gen. Scott Naumann, the Army’s director of training, adding that it won’t be much different from what soldiers did during the old physical fitness test.

Dr. Chaitra Hardison, the lead author of the RAND study, told reporters on Monday that the Army developed the ACFT by testing an overwhelming majority of male soldiers (the study that created the test included 62 women and 414 men). While RAND was studying the test for their report, Hardison said they saw women, and soldiers in the Guard and Reserve, “failing at noticeably higher rates.”

“The differences in pass rates were biggest between the genders,” Hardison said. “Roughly half of enlisted women passed versus 85-90% of men depending on the component.”

The test moving forward will include hand-release pushups, a two-mile run — which Grinston said is the most-failed event — the sprint-drag-carry, overhead power throw, and deadlift, and the plank which is permanently replacing the leg tuck. When it came down to it, RAND found that the leg tuck, which requires soldiers to pull their legs up to their elbows on a pull-up bar, was not a good indicator of core strength because, in order to complete the exercise, soldiers also needed good grip strength and upper body strength. In turn, soldiers who may have had good core strength and less upper body strength wouldn’t have fared as well on the leg tuck, despite its intent being to measure core strength.

“When you get a chance to read the RAND study, it said it’s weak validity when it’s a predictor of core strength,” Grinston said. “Some of the problems … is when you start looking at it, the leg tuck has really three components to it: There’s a grip strength, then there’s an upper body strength, and then there is the core event. If I don’t have the grip strength, but I may actually have core strength, I actually can’t do a leg tuck. I think that was the reason for wanting to take that out.”

Naumann added that the event was removed from the ACFT because the Army wanted to have “everyone experience the test in the same way,” instead of allowing them to choose between the plank or the leg tuck.

Another difference moving forward seems to be the way the Army is looking at the ACFT. In 2018, Maj. Gen. Malcolm Frost, then the commander of the Army’s Center of Initial Military Training, said the ACFT would be a better predictor of “performing in combat and executing warrior tasks and battle drills.”

But on Monday, the tone was different. In order to address some of the test shortfalls identified by RAND, Naumann said it would be implemented “as a general physical fitness assessment, as opposed to one that is designed to predict performance on a set of tasks.”

But the bottom line is that this is the test soldiers better get used to. Grinston told reporters on Monday that “this is the test,” and while he said he can’t predict the future and any tweaks or minor adjustments as time goes on, the test as it stands now is what soldiers need to learn.

Grinston made the same point to the Army’s command sergeants major earlier on Monday when he briefed them on the changes, although in a somewhat more direct, sergeant major fashion: