13 Years After His Death, Pat Tillman Returns To His Alma Mater

In 2004, NFL football player-turned-Army Ranger Pat Tillman was killed in a friendly fire incident in the Khost province of... 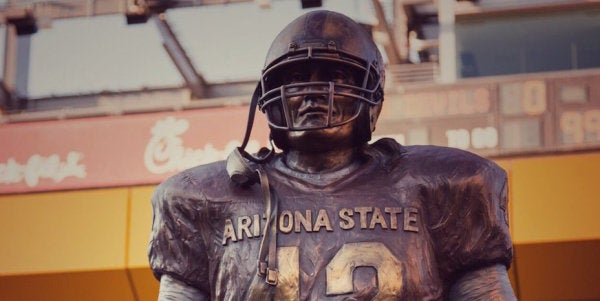 In 2004, NFL football player-turned-Army Ranger Pat Tillman was killed in a friendly fire incident in the Khost province of Afghanistan. Thirteen years later, Tillman has returned to his alma mater — Arizona State University — as a bronze statue that will greet Sun Devil fans for generations to come.

Tillman attended ASU from 1994 to 1997, where he played linebacker. There, he distinguished himself as a powerful key player, despite his relatively small stature for the position. During his junior year, in no small part thanks to Tillman’s efforts, the team went undefeated until the Ohio State Buckeyes gave them their first loss in the 1997 Rose Bowl. But Tillman wasn’t just a good football player: he excelled academically, graduating with a 3.85 GPA.

“We're grateful to Arizona State University and the Sun Devil community for honoring Pat's legacy,” Marie Tillman, his widow and the board chair and co-founder of the Pat Tillman Foundation, said in a statement to Task & Purpose. “Pat made his mark as a student, athlete and soldier. We hope his statue stands as a reminder of the principles he lived by and his dedication to empower those around him on and off the field.”

Tillman was drafted in 1998 by the Arizona Cardinals, but his plans for the future changed after the Sept. 11, 2001, terror attacks. After finishing up the 2001 season in March 2002, Tillman turned down a three-year, $3.6 million contract to continue playing with the Cardinals to enlist in the Army that May alongside his brother Kevin, who turned down a spot with the Cleveland Indians. The two brother completed basic training in September 2002 and the Ranger Assessment and Selection Program at Fort Benning, Georgia, shortly thereafter.

After serving in Iraq during the initial invasion in 2003, Tillman deployed the following year to FOB Salerno in the Khost province of Afghanistan with 2nd Platoon, Alpha Company, 2nd Battalion, 75th Ranger Regiment. But on April 24, 2004, a friendly fire incident took his life. A Washington Post article from 2004 suggested “the incident was the result of a series of problems and failures as the Ranger platoon moved from one assignment to another through the mountainous terrain along the Pakistan border, about 90 miles south of Kabul, near the village of Spera” — a senseless mistake.

The newly designed Sun Devil Stadium is something of an homage to Tillman. Before entering the field, the players all exit the locker room and run through a vestibule of motivating phrases called Tillman Tunnel, and every wall of the stadium has a picture of the revered soldier. The statue, according to head coach Todd Graham, will be a reminder to all the players to persevere both on and off the field.

“We start the tradition this year of every player touching the that statue before they take the field,” Graham said in a statement to Task & Purpose. “I can tell you what my message is going to be is don't talk about it. If you are going to go out there and touch that statue, you get out on that field and you bring it like he did.”

Marie Tillman continues to run the Pat Tillman Foundation, an organization dedicated to helping veterans and their spouses by offering them academic scholarships at places like ASU.

“Sun Devil Athletics is extraordinarily proud as we pay tribute to one of the greatest and most well-respected Sun Devils in history,” Ray Anderson, vice president for ASU athletics, said in a statement. “The magnitude of Pat's legacy extends far beyond this university, this community and the state of Arizona.”