After more than a year testing a handful of major upgrades to the shoulder-fired M3 recoilless rifle, the Army is racing... 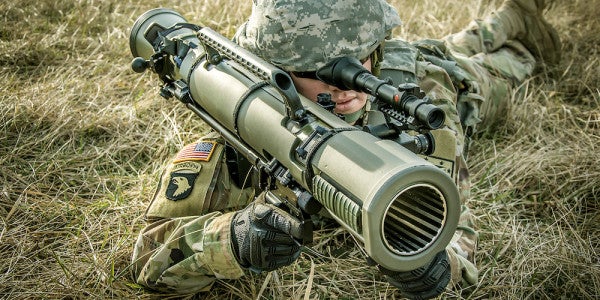 After more than a year testing a handful of major upgrades to the shoulder-fired M3 recoilless rifle, the Army is racing to dole out more than 1,000 of the brutal anti-tank bazooka system to lucky soldiers around the world.

On Sept. 6, the branch announced that it had approved 1,111 M3E1 recoilless rifles for immediate use as a lightweight, reusable replacement to the standard 84mm M3 Multi-Role Anti-Armor Anti-Personnel Weapon System (MMAAWS), better known as the M3 Carl Gustaf, that emerged as a staple of Army Ranger and Navy SEAL arsenals in 1994.

Developed for both the Army and the U.S. Special Operations Command, the M3E1 is a significantly lighter and less cumbersome anti-tank system than its predecessor, according to officials with the Army Research, Development and Engineering Command at the Aberdeen Proving Ground in Maryland. The weapon was designed in collaboration with Swedish manufacturer Saab Bofors Dynamics, godfather of the original Carl Gustaf recoilless rifle, as part of foreign technology program initiated in 2012 to save R&D; dollars

In response to soldier and special operator feedback, the M3E1’s new titanium shell reduces the system’s weight by 6 pounds and length by 2.5 inches, swaddling the bazooka in an adjustable new carrying harness and shoulder padding. But more importantly, the Army hopes its re-engineered new bazooka will give troops a deadly capability they haven’t always enjoyed downrange: the ability to fire multiple shots with the same weapon.

The current system that the Army uses is the AT4, which only allows Soldiers to fire one shot, and then they have to throw the system away,” Randy Everett, project manager for the foreign technology program, said in a statement. “With the M3E1, Soldiers can use different types of ammunition which gives them an increased capability on the battlefield.”

In addition to increased comfort and firepower, the new M3E1 might just end up being (relatively) cheaper in the long run, which was the end goal of the foreign technology program. On top of a customizable fire control and fuze setting system, a specialized automatic round counter will “ soldiers and logisticians to accurately track the service life of each weapon,” according to the Army.

Cheaper and more comfortable, is great, sure. But given that every Army infantry platoon currently enjoys the explosive glory of the M3 Gustaf, the real question is: how much boom does this bad boy actually make? Let’s see what Saab, which unveiled the new M3E1 system (as the M4) in 2014, has to say about that: