U.S. Army infantry platoons will soon have the 84mm Carl Gustaf recoilless rifle, a devastating anti-armor system, as a permanently... 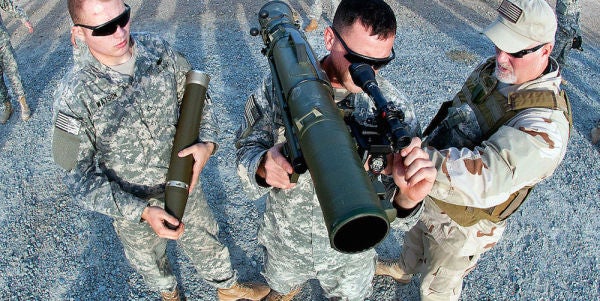 The service is also working on an effort to achieve Full Material Release of the M3 later this year.

Army light infantry units began using the M3 in Afghanistan in 2011, but only when commanders submitted operational needs statements for the weapon.

The breech-loading M3, made by Saab North America, can reach out and hit enemy targets up to 1,000 meters away. The M3 offers the units various types of ammunition, ranging from armor penetration and anti-personnel, to ammunition for built-up areas, as well as special features like smoke and illumination.

Special operations forces, such as the 75th Ranger Regiment, have been using the 84mm weapon system since the early 1990s. The M3 became an official, program of record in the conventional Army in 2014.

The M3 has enjoyed success with units such as the 25th Infantry, 10th Mountain, and 82nd Airborne divisions in Afghanistan.

The launcher weighs approximately 22 pounds, with each round of ammunition weighing just under 10 pounds. By comparison, the AT4 weighs about 15 pounds and the Javelin's launcher with missile and reusable command launch unit weigh roughly 50 pounds.

The current plan is to equip all brigade combat teams with one M3 launcher per platoon.