Has the Army finally found a replacement for the Bradley Fighting Vehicle?

The Army expects to decide which company will produce the Optionally Manned Fighting Vehicle by the end of fiscal 2027. 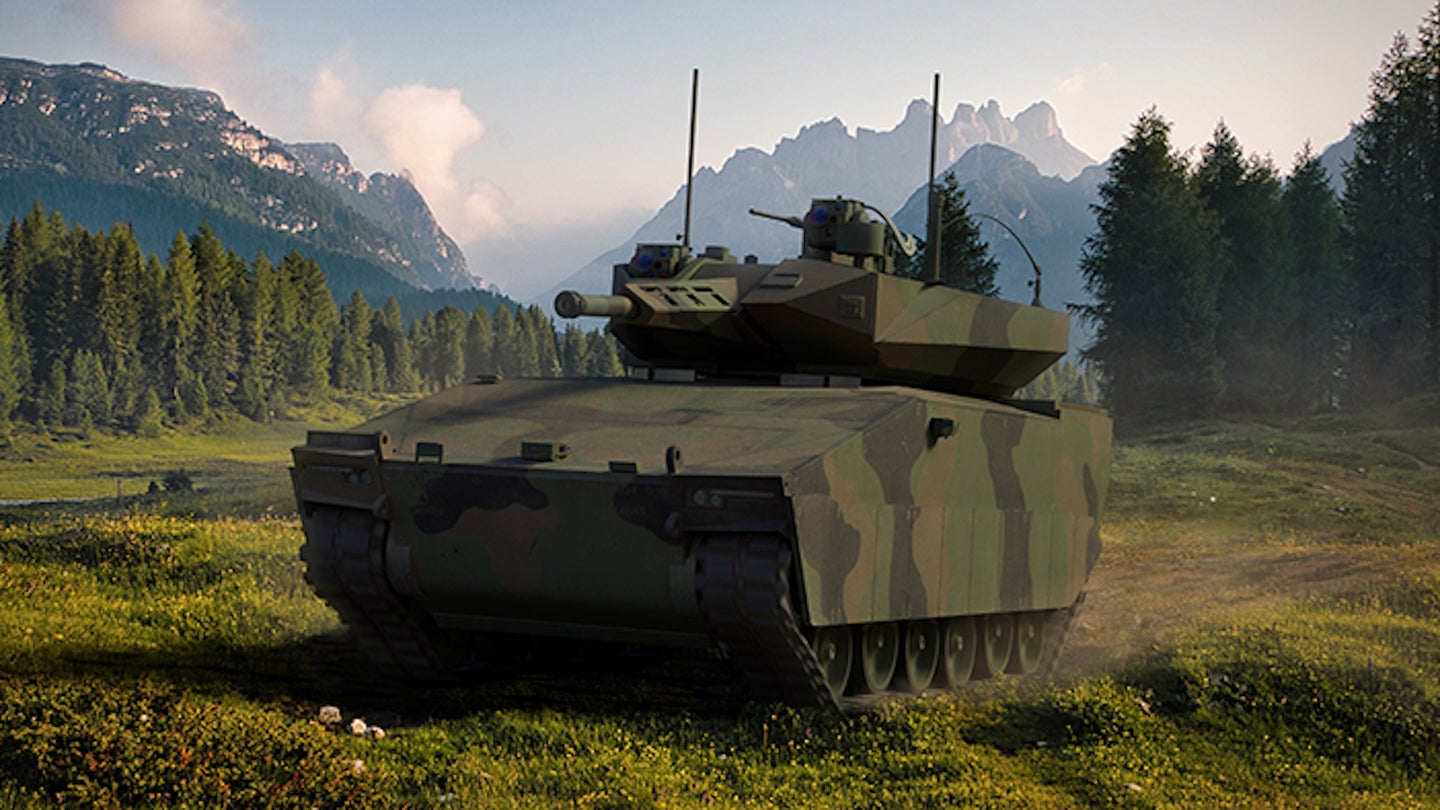 For decades, the Army’s quixotic adventure to replace the Bradley Fighting Vehicle has failed to produce tangible results, but a new design by American Rheinmetall raises the prospect that the service’s torturous search for a Bradley replacement will not go on indefinitely.

Five companies are taking part in the concept design phase for the Army’s Optionally Manned Fighting Vehicle program, which aims to finally replace the more than 40-year-old Bradley with a new fighting vehicle that can either be manned or remotely operated and allow dismounted service members to destroy targets at ranges beyond the enemy’s ability to strike back.

In July, the Army announced that it expects to select which company will produce the vehicle by the end of fiscal year 2027, and the first units are scheduled to receive the new OMFVs in fiscal year 2029.

American Rheinmetall, a U.S. subsidiary of a German armaments firm, recently presented a conceptual mockup of a modified version of its Lynx vehicle as its submission for the OMFV competition, said Michael Milner, director of business and development and strategy for the company.

The mockup was on display at the most recent Association of the United States Army conference in Washington, D.C. this past week. American Rheinmetall expects to continue to refine the Lynx OMFV’s design before building prototypes for the Army to test, Milner told Task & Purpose.

“It will go through multiple design iterations between now and building an actual prototype,” Milner said.

The concept for the Lynx OMFV includes dedicated subsystems to help the vehicle’s two-person crew detect and destroy anti-tank guided missiles, loitering missions or drones, top attack munitions – which are meant to strike vehicles where armor is typically the weakest – as well as cyberattacks and direct fire weapons, Milner told Task & Purpose.

The Lynx OMFV would combine armor and American Rheinmetall’s StrikeShield Active Protective System to protect the troops inside from incoming missiles and other projectiles, Milner said.

StrikeShield identifies when enemy missiles are coming at the vehicle and then fires charges to destroy them, Milner explained. Unlike other active protection systems such as Trophy and Iron Fist, the StrikeShield system destroys enemy projectiles close to the vehicle and has a low electronic signature.

As it is currently envisioned, the Lynx OMFV would be equipped with an XM913 50mm chain gun, which would offer a major upgrade in firepower compared to the Bradley’s M242 Bushmaster 25mm autocannon.

Like the Bradley, the Lynx OMFV would carry six service members inside, and Raytheon is developing a launcher for the vehicle that could fire TOW missiles, Javelins, or Coyote drones.

If the Army is able to field the OMFV to replace the Bradley, it would mark a rare success for the service’s modernization programs. The current OMFV program is the Army’s latest attempt to replace the nearly 28-ton Bradley Fighting Vehicle, which has been in service since the 1980s.

From 2003 until 2009, the Army poured $18 billion into its Future Combat Systems program which was supposed to include a new Infantry Carrier Vehicle, but the entire program was canceled without yielding any results.

“Defense acquisition experts have referenced Future Combat Systems as an example of everything wrong with defense acquisition—a canceled program that wasted billions of dollars and delivered no capability to warfighters,” retired Army Col. Robert F. Mortlock wrote for a March 2022 article in Army Acquisition, Logistics, and Technology Magazine.

The Army then tried to develop a Ground Combat Vehicle to replace the Bradley, but the Army canceled that program in 2014 in part because the new vehicle was expected to weigh between 50 and 70 tons, almost as much as the 72-ton M1A2 Abrams tank, Mortlock wrote.

And in January 2020, the Army announced it had canceled its initial solicitation for the OMFV to take another look at the vehicle’s requirements, schedule, and acquisition strategy, proving that the service just can’t seem to quit the Bradley.

As things stand now, replacing the Bradley is a much higher priority for the Army than for the Defense Department, said retired Marine Col. Mark Cancian with the Center for International Studies think tank in Washington, D.C.

The Pentagon is focused on the Western Pacific and China and finding a new fighting vehicle is not essential to preparing for a conflict in that part of the world, Cancian told Task & Purpose.

“They would much rather have the Army focus on long-range precision strike and air defense, missile defense,” Cancian said.

While Russia’s recent invasion of Ukraine has shown the importance of tanks and armored vehicles for wars in Europe, it would be hard to argue that the Army needs to upgrade its inventory of such vehicles based on the Russian military’s performance so far, he said

There’s a good chance that the OMFV program will end up taking longer than initially planned because all the military branches will compete for money as future increases in the defense budget are eaten away by inflation, Cancian said.

As for the future of unmanned weapons systems, Cancian said he believes that smaller unmanned aircraft and vehicles will likely prove to be more important on future battlefields than remotely controlled fighting vehicles.

“It’s so complicated operating a tank; whereas the smaller vehicles can be used for reconnaissance and even some combat tasks but are much easier to employ than an entire vehicle,” Cancian said. “There’s just a lot of things you have to do to get it to operate as well as a vehicle that is operated by humans.”