The Bradley Fighting Vehicle has serviced the United States military for nearly four decades, but the service, try as it might, can't seem to effectively develop a replacement 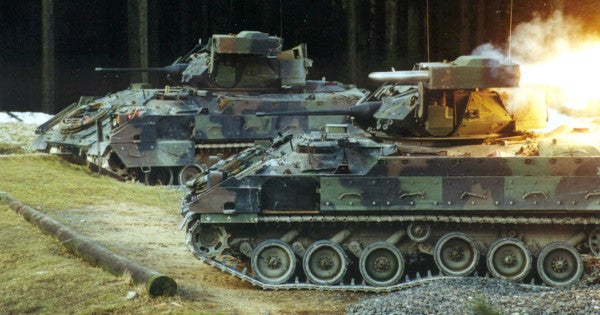 The Bradley Fighting Vehicle has serviced the United States military for nearly four decades, but the service, try as it might, can't seem to effectively develop a replacement.

The Army has officially cancelled its current solicitation for its Optionally Manned Fighting Vehicle (OMFV) replacement for the M2 Bradley, the service announced on Thursday, in order to “revisit the requirements, acquisition strategy and schedule” before moving forward with prototyping.

The move was reportedlyprompted by the fact that the service only received one big, from General Dynamics Land Systems, for its $45 billion OMFV prototyping competition, as Army leaders told Defense News on Thursday.

“Despite an unprecedented number of industry days and engagements, to include a draft request for proposal over the course of nearly two years … it is clear a combination of requirements and schedule overwhelmed industry's ability to respond within the Army's timeline,” Dr. Bruce Jette, assistant Secretary of the Army for Acquisition, Logistics and Technology, said in a statement.

Despite this, Jette reiterated that the service remains “committed” to developing a prototype under the OMFV program as a major modernization priority.

“We remain committed to the OMFV program as it is our second-highest modernization priority, and the need for this ground combat vehicle capability is real,” he said. “It is imperative we get it right for our Soldiers.”

The OMFV — part of Army Futures Command's Next-Generation Combat Vehicle (NGCV) program — is just the latest attempt to replace the Bradley in an effort that to span nearly two decades.

In 1999, the Army adopted the Future Combat Systems (FSC) Manned Ground Vehicles (MGV) program was initiated as part of a broad effort to make the service's legacy forces “lighter, more modular, and — most importantly — more deployable,” as the Army put it at the time.

That program was cancelled a decade later in 2009 and immediately replaced with the Ground Combat Vehicle program in 2010, which sought to replace the Bradley with the a Ground Combat Infantry Fighting Vehicle before being cancelled in 2014 amid rising costs and expanding requirements.

If the OMFV reboot is any indication, the phrase “third time's a charm” clearly does not apply to military.